Over the next century, scientists say about 70 percent of California’s salmon and trout could disappear. But new research indicates that even with climate change, there’s a glimmer of hope for the species.

Key to the cold-water fish’s survival will be if the water doesn't warm too much, and if their habitats stop vanishing, because baby salmon, or salmonids, usually need colder water to survive and grow.

UC Davis California scientist Robert Lusardi worked on a recent study that tested how juvenile Coho Salmon respond to warmer water conditions in the Shasta River basin. His team put 150 young salmon in 25 enclosures in the river during the warm months of the year. After 63 days, they checked on them. Lusardi says the results were surprising, considering that young salmon usually experience stress in warm water.

"We actually saw the growth peaked at much warmer water temperatures than we ever anticipated,” he said. 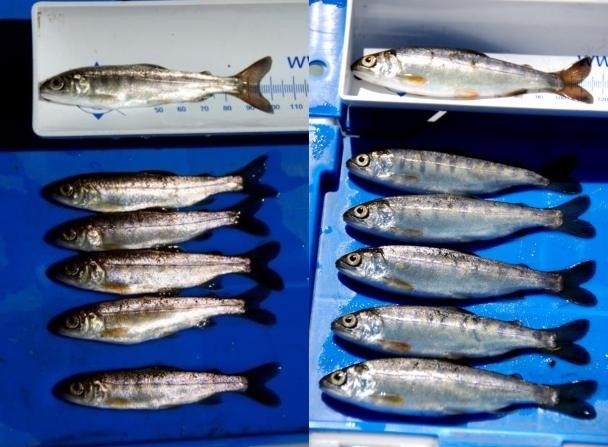 These fish were the same size pre-experiment. Coho on the left were reared at a mean temperature of 13 degrees celsius, and maximum weekly temperature of 16 degrees. Their mass changed, on average, 1.4 grams during the experiment.Rob Lusardi / UC Davis

The fish’s growth rates peaked at average water temperatures of 61.8 degrees fahrenheit, and what Lusardi calls an “unheard of” maximum weekly temperature of 70.

So, how did the cold-water fish survive the warmer temperatures? There was enough food — aquatic invertebrates like freshwater shrimp or mayflies — in the water to compensate for the rise in temperature.

"Food was really the variable that turned the tide for these fish,” Lusardi said.

The higher temperatures speed up the fish's metabolism, according to Lusardi, so they eat more and fatten-up. Warmer water often has more food sources.

But he says there’s a caveat. “Their growth actually continued to increase positively at those temperatures, but several of the fish actually died,” Lusardi said. “So, it shows that this is only to a certain extent."

Still he says he's unsure if those fish would've stayed where the water was warm or leave in search of cooler water as the climate crisis worsens.

“Fish can’t just eat their way out of it,” Lusardi said.

He says the implications of the study are that fish can survive and do well if there’s sufficient food and just a slight increase in temperatures.