Rolling In Dough: Country’s Busiest Mall Cinnabon May Be At Sacramento’s Arden Fair

If you've stopped for a cinnamon roll during a holiday shopping trip at Arden Fair Mall this season, you may have played a part in an intense competition for the title of busiest Cinnabon in the country.

The Sacramento store is locked in a battle with the franchise at the Mall of America, the 5.6 million square foot tourist destination in Minnesota, to see which one will be the top mall bakery for the chain.

For many years, the Cinnabon at Mall of America was a runaway favorite. More than 40 million people visit the mall every year, four times the number who go to Arden Fair.

Greg Komen is the president of the company that owns the Mall of America Cinnabon franchise and has been with the company since the first cinnamon roll was sold. He says it was just assumed the store would continually hold the title of the chain’s busiest mall location.

“We really were uncontested for most of our existence because we exceeded every other Cinnabon by a longshot,” Komen said.

But then something happened last year that he didn’t see coming. The Arden Fair Cinnabon closed and then reopened under new management. The store was now being run by his friend Steve Foltz.

“We were setting record days from the day we took the barricade down, so we knew from literally the second day that we were in pretty good competition with [Mall of America] ... and nothing has changed,” Foltz said with a laugh.

Foltz is based in Oregon. His investment group owns several Cinnabon locations, including one at the Clackamas Town Center near Portland.

It was previously his group's busiest store. Now Arden Fair does nearly twice as much volume, something Foltz said he can’t explain. 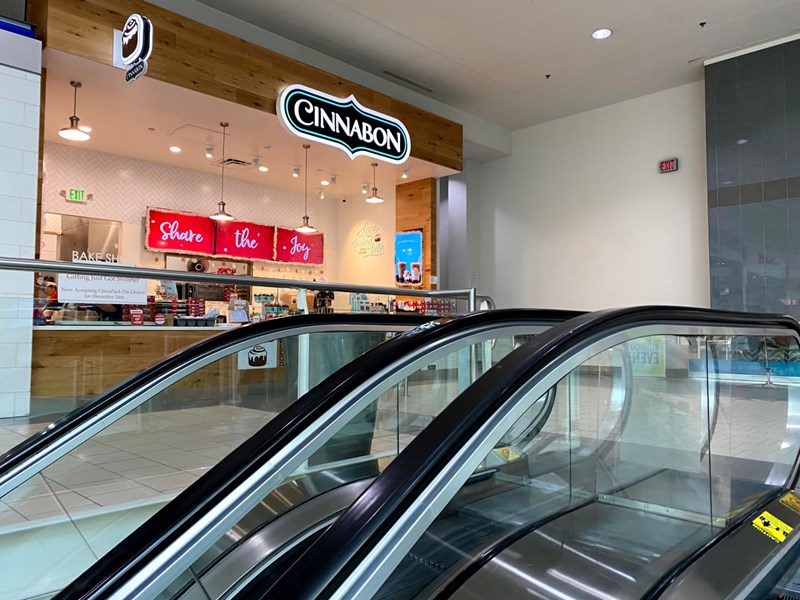 Arden Fair Cinnabon owner Steve Foltz says he wouldn't have chosen the store's location outside the food court, but thinks it being at the top of the escalator helps.Randol White / CapRadio

Sonia Figueroa is the store manager at Arden Fair and has been with Cinnabon for more than a decade. She has her own theory as to why the store is doing so well.

“We were closed for so many months, that people actually missed it,” said Figueroa. “They were afraid we were never going to come back, so when we did come back, they didn’t care if the line was out the door. They wanted to wait.”

Both Foltz and Komen said the friendly competition between Arden Fair and Mall of America is really tight this year and they won’t know which location is No. 1 until the December books come in.

Two other locations, not in malls, are also among the busiest in the nation. One is at Universal Studios in Florida, the other is at McCarran International Airport in Las Vegas.