Step Aside Fires, Drought And Crazy Weather. Sea Level Rise Is Slowly Getting Its Day In California.

People love the Golden State because of the coastline. There are all sorts of songs about the vibe California embodies — think “California Gurls” by Katy Perry, “Californication” by the Red Hot Chili Peppers and “California Love” by 2Pac.

But the ocean's response to climate change is threatening that very identity.

"It's part of what you often hear described as being Californian,” said Christine Whitcraft, director of Cal State Long Beach's Environmental Science and Policy program. “Threats from sea level rise are important for economics, but they're also important for the intrinsic value they have to us as Californians."

She says sea level rise is on the minds of leaders across the state because people have started to see impacts in their daily lives or in their yearly time frame.

The sea could rise by half a foot by 2030 and as much as seven feet by the end of the century, according to a high-level report from the state's Legislative Analyst’s Office. That could have a huge impact on the millions of Californians who live along the coast.

“We could lose two-thirds of our beaches absent any action,” said Rachel Ehlers, a principal fiscal and policy analyst with the LAO. She is also the lead author of the report intended to guide lawmakers in 2020 as they prepare budgets and create bill.

"It's not just wealthy people who will be impacted,” said Ehlers. “There's a lot of vulnerable communities that have a lot of folks with lower incomes, folks who don't have cars. So, they may not be able to get out when there's flooding.

"The researchers also found a gap in how the state wants to address sea level rise and how localities are dealing with it. Ehlers says finding funding at the local level can be tough because the full effects of sea level rise won’t be seen for years.

“There are many communities around the state that are planning, but very few that have moved on to the phase of taking action,” said Ehlers. “We need to do that both because the water is coming, but also this is a key time to test out strategies.”

“This makes the risk of disruption more real for people and has them realize we have to stop and do something about this,” said Stacey. For instance, he says the highest high tides in the San Francisco Bay disrupts traffic half a dozen times a year instead of once or twice a year.

“Are we ready today? No. But are the right conversations happening to get ready? I’d say yes.”

There are places that are preparing for the surge in the coming decades. Some are working across city and county boundaries to prepare regionally, which the LAO report recommends.

But Ehlers, with the LAO, says there is a lack of forums or partnerships taking place around the state.

“We know that sea level rise won’t stop at the city or county line,” she said. “In fact, what actions one city takes might negatively influence their neighbors. If one city puts up a lot of sea walls, that water’s going to slosh over to the neighboring jurisdiction and erode all the beaches over there.”

Leaders in San Mateo County — south of San Francisco with the Bay on one side and the open ocean on the other — want to prevent that very scenario from taking place. 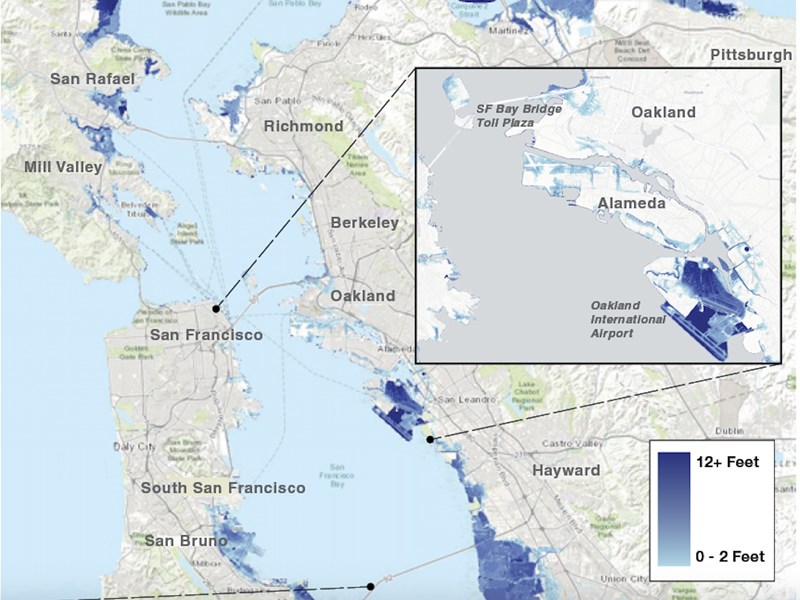 “Our county is the most exposed county in the entire state in terms of value of property at risk,” said San Mateo County Supervisor Dave Pine. “We have tremendous exposure on the Bay side, and on the coast side we are already seeing very significant coastal erosion, which threatens infrastructure.”

Pine says the county has modeled out what three feet of sea level rise means.

“That would cause upwards of $40 billion in losses to property," he said. "In San Mateo everything east of Highway 101 would be inundated. It would be a massive blow to the county.”

That’s why San Mateo County is planning ahead. Pine says there are lots of projects in the works to prevent big issues with sea level rise, including 10 miles of levees at San Francisco International Airport.

The county and 20 cities in San Mateo have formed a partnership — the Flood and Sea Level Rise Resiliency District — to protect the region from the negative impacts of sea level rise. It goes into effect January 2020.

“The thinking is that no single jurisdiction can deal with this by itself … and we need to position ourselves to compete for state funds,” said Pine.

“There’s an awful lot of shoreline to protect and we still have a lot of work to do.”

Sea level rise doesn’t lend itself to one type of solution or masterplan. Levees near one community, moving people from where water will rise or building sea walls near another aren’t universal answers, said Pine.

“We have put so much carbon into the air and we will see seas rise for centuries to come,” said Pine. “It’s impossible to know at what rate they will rise, but we will have to work on this from generation to generation.”

Pine admits that humans aren’t very good at taking action to prevent problems until the issue becomes severe. But waiting means the costs would greatly exceed that of planning and preparing for sea level rise.

On the coast near Long Beach Christine Whitcraft, director of CSULB’s Environmental Science and Policy program, is experimenting by creating beds of California native Olympia oysters and sea grass to make a living shoreline. 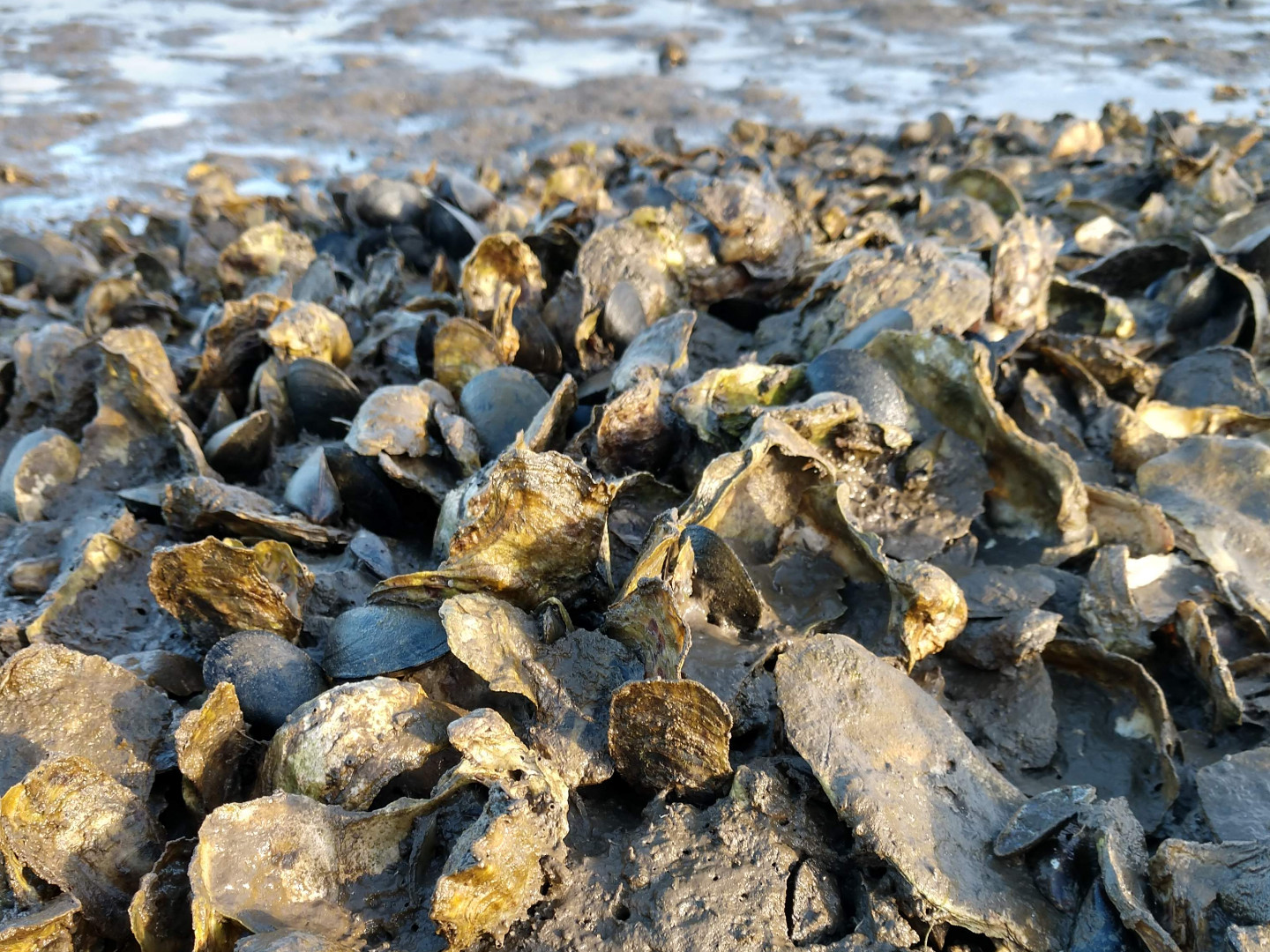 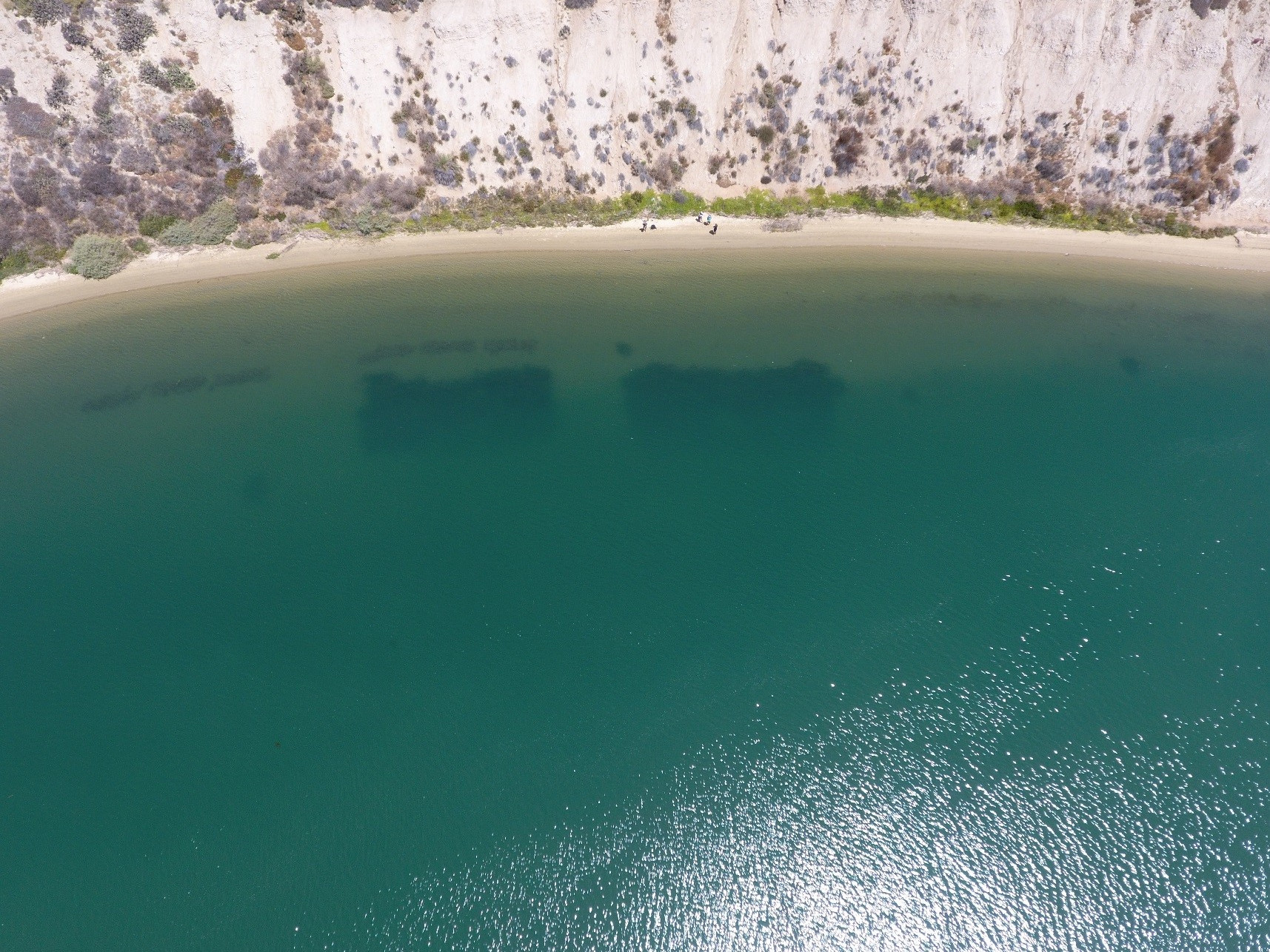 CSULB scientists are experimenting with adding beds of oysters and sea grass to help reduce the erosion of the shoreline. Close-up (left) and aerial photo (right) of oyster beds in Southern California. Courtesy of Danielle Zacherl (left) and Nick Sadrpour (right)

She says the patches of oysters help reduce shoreline erosion by holding down the mud it sits on and helps protect the land behind it from storm surges and waves.

“I don’t think oysters or eel grass alone can prevent all the damage to the communities behind it, but I think they are part of the solution,” Whitcraft said.

She also has her students take pictures of where sea water floods parts of the coast when high tides occur. For them, she says, the idea that the sea is already inundating places they often visit was surprising.

To help the public understand how sea level rise could inundate their communities the city of Santa Cruz is offering virtual reality simulations at a local library. (Check out his NPR article for more).

“We look at the three different areas and as you pull sliders to the right you see the sea level rise inundating our low-level areas,” said Tiffany West, the city’s Sustainability and Climate Action Manager. “It allows you to get a real understanding of where the water would go.”

The product is only available on-site, but West says an app of the project will be available in six months.

“What people don’t realize is that we are already experiencing these impacts, especially during King Tide situations,” West said. “A lot of this discussion is so abstract around sea level rise that this makes it much more concrete.”

A similar project is in progress for Long Beach where a strip of beach homes is at risk.