California Lawmakers Have Piled A Giant Stack Of Bills On Gov. Gavin Newsom's Desk. Here Are Some Of Them

California Gov. Gavin Newsom, who has sought to position himself as one of the leading domestic critics of President Trump, will veto a newly passed bill that would have blocked the administration's rollbacks of Obama-era environmental standards.

In a statement issued less than 12 hours after the Legislature adjourned for the year, Newsom said he fully supports the principles behind SB 1 by Senate President pro Tem Toni Atkins (D-San Diego).

However, the governor added, the measure does not “provide the state with any new authority to push back against the Trump Administration’s environmental policies and it limits the state’s ability to rely upon the best available science to protect our environment.”

Although the swiftness of Newsom's announcement might have come as a surprise, lawmakers were well aware of his unease about the bill. The governor had signaled he was receptive to the water issues raised in a letter from California's U.S. Sen. Dianne Feinstein and several House Democrats who represent the Central Valley.

Atkins told reporters late Friday that she had debated for several days over whether to move the bill forward — not because she didn't think it could pass the Legislature, but because of Newsom's concerns.

“I think that’s what led me to wait this long to try to see where we can get in the discussions,” she said.

The California Legislature has taken a sweeping new step towards defying the Trump administration’s environmental policies by sending a bill that would codify Obama-era regulations into state law to Gov. Gavin Newsom.

That action, along with measures that would place a $15 billion school and college facilities bond on the March 2020 ballot and require abortion services at public universities, topped the list of lawmakers’ final actions on an unprecedented final day of the legislative session.

It was a day that saw the Senate disrupted for hours when a protester threw a menstrual cup containing what the California Highway Patrol said appeared to be blood from the chamber’s upstairs Gallery onto its floor.

“I know how hard this was for some people, but I think it was the right thing to do, and I’m incredibly appreciative,” a relieved Atkins said moments after watching her bill pass the Assembly on a 46-22 vote. The Senate gave the measure final approval a short time later.

During the debate, Asm. Devon Mathis (R-Tulare) accused backers of a “knee-jerk reaction” to the policies of a president they dislike.

“What this bill does is turn my area of the state, literally, into a dust bowl,” Mathis said.

The measure, labeled the “the California Environmental, Public Health, and Workers Defense Act of 2019,” is designed to keep what supporters say are longstanding federal protections in place in California even if the Trump administration rolls them back. For example, it would require state agencies to adopt Obama-era standards under the federal Clean Air and Clean Water acts if the Trump administration weakens them.

It adds to a long list of the state’s battles against the president — including California’s “sanctuary state” law, National Guard deployment, auto emissions standards, high-speed rail project and dozens of lawsuits on immigration, health care and the environment.

Atkins acknowledged that she doesn’t know if the governor will sign the measure.

Here are some of the other bills that Newsom will need to act on by Sunday, Oct. 13th:

Other prominent bills stalled Friday, although they can be brought back up when the Legislature reconvenes in January. They include:

For several hours, however, the Legislature’s work ground to a halt amid a disruption the likes of which longtime Capitol staffers said they’ve never seen.

At about 5:15 p.m., “a demonstrator in the Senate Gallery stood up and threw a feminine hygiene device containing what appeared to be blood, onto the Senate floor,” the California Highway Patrol reported several hours later. The protester shouted words that included the phrase “dead babies.” 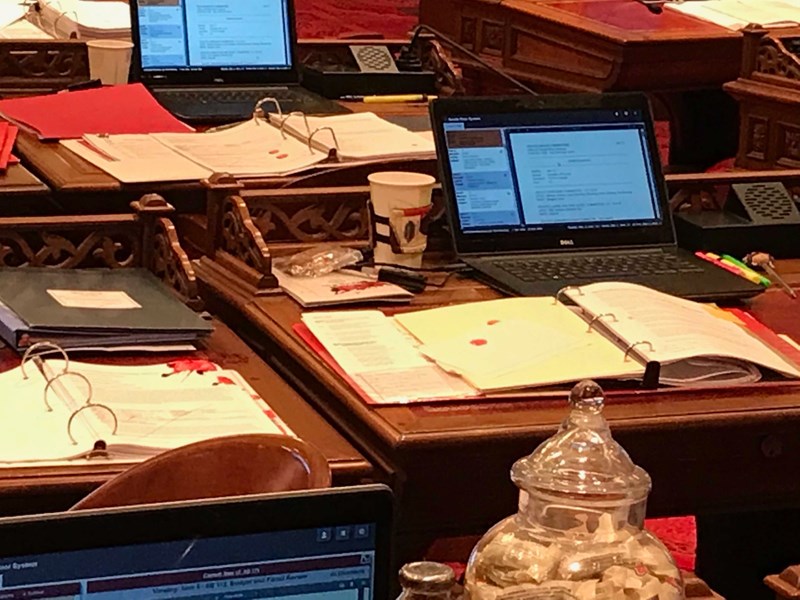 The Senate had just finished a vote Friday when a woman tossed a red liquid from the public gallery.Ben Adler / Capital Public Radio

Sen. Steve Glazer (D-Orinda) tweeted that the liquid landed on six senators, including him.

Senate sergeants-at-arms swiftly cleared the gallery, and the CHP arrested the protester. She was charged with six counts, including assault, vandalism and willfully disturbing the Legislature while in session.

The Senate chamber was designated a crime scene, with yellow crime tape strung across desks. Senators reconvened three hours later upstairs in one of the Capitol’s largest committee rooms.

“A crime was committed today,” Atkins told her colleagues as they reconvened, “but the Senate will not be deterred from conducting the people’s business.”

“Violence of any type will not be condoned or tolerated in any way, shape or form,” said Senate Republican Leader Shannon Grove (R-Bakersfield), who’s been sympathetic to the concerns raised by vaccine bill opponents. “The person that is in question should be prosecuted to the fullest extent of the law.”

A Facebook page under her name is dominated by posts that raise concerns with vaccines. Two new California laws signed by Newsom earlier this week seek to crack down on fraudulent medical exemptions for vaccines.

Protesters have demonstrated against the vaccine bills throughout the year. On Monday — the day the final measure passed the Legislature and Newsom signed the legislation — they repeatedly disrupted the Senate and Assembly with chants and singing from the galleries.