The 2019 high school graduation at San Mateo County juvenile hall's Hillcrest School is a big affair. The facility’s gym, decked out with balloons and streamers, is packed with about 100 people, among them elected leaders and high-ranking county officials.

They’re all here late in May to celebrate a graduating class of four young men, dressed in ties and khaki slacks under purple gowns, each wearing identical county-issued white sneakers.

Graduating from high school, or earning credit toward graduation, is usually a best-case educational scenario in California’s juvenile detention centers. But in San Mateo, the crowd assembled for this graduation — an unusual alliance of probation officers, county education officials and local educators — has fought hard to make sure students can see a future for themselves in college.

At this juvenile hall, young people can take classes taught by community college instructors from nearby College of San Mateo through a program called Project Change. It’s one of only a handful of programs of its kind in the state, and it was one of the very first.

Some California lawmakers have taken note. Now they’re pushing to bring college classes to juvenile detention facilities around the state.

On stage at the gym, 18-year-old Ramone — just his first name is being used to protect his privacy — steps to the mic. “We should leave here with the legacy of being kids who were at their worst,” he tells his fellow graduates, “and who then became successful in ways that led to our high school graduation.”

After the ceremony Ramone is standing outside the gym holding a plate stacked with brightly frosted mini cupcakes. He says he’s proud to have his high school diploma, but he’s not getting out of detention anytime soon.

“I've been here already a year, and I got a year left,” he says. “I’ve been in and out of here for a while; I’ve been in different facilities. I’ve been incarcerated since I was 13, and it’s had a big impact on my life.”

Project Change is trying to reshape Ramone's life by helping him see himself as a college student and giving him the support to continue in higher education when he gets out. 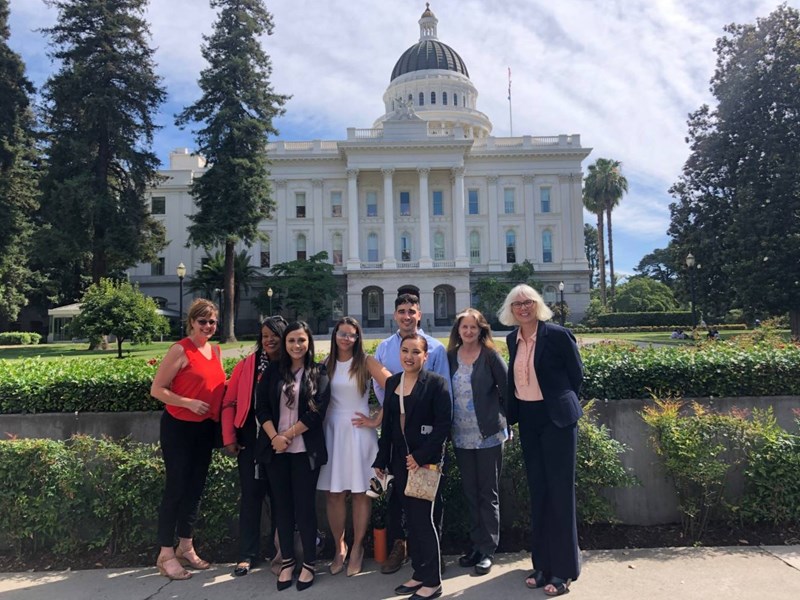 Policy advocate Lucy Salcido Carter (far right) of the Youth Law Center, and Project Change director Katie Bliss, with Nick Jasso and other Project Change students outside the Capitol, where they spoke in support of Senate Bill 716.Courtesy of Katie Bliss

By law, the roughly 4,500 young people detained in state and county facilities in California must have access to a high school education, but that’s typically where the schooling ends. Probation officers often struggle to keep kids like Ramone busy after they have their diplomas. “We got a lot of time on our hands,” Ramone says.

John Keene, San Mateo County chief probation officer, says that boredom can lead to trouble. “They could find themselves adding more time onto their custody stay, so all the momentum that they've gained by getting the high school diploma so early sometimes gets lost.”

Both Keene and Ramone are grateful that Project Change offers college courses to youth at the juvenile hall. “When you’re in your cell, it makes you feel better,” Ramone says. “You’re looking forward to turning in your work and see what kind of grades you get. You want to do it for you.”

“We have to remember that these are children, these are young people,” says Salcido Carter.  "If they are going to be in custody, we want to make sure that they're getting access to all of the programming they can, to be able to develop skills that will help them do well when they get out, and never come back.”

She points to a national survey that found close to 70% of young people in detention aspire to college or beyond.

“There's a real misalignment between what these young people want to accomplish academically and the quality of the education that they get when they're in the court schools,” Salcido Carter says, referring to the county-run educational programs in detention facilities.

Salcido Carter sees college classes as a way to boost the quality of the coursework offered in detention facilities. “If what's happening is really below par and not meeting the needs of that student, they at least have access to another academic program and can get more rigor through that,” she says. “It just raises the bar for them and allows them to think about what they're capable of academically in a different way.”

Salcido Carter helped write the legislation that lawmakers are now weighing, which would require county probation departments to work with public higher education institutions to provide at least online programming for youth in custody who have a high school diploma or equivalency. It would also encourage probation departments to form partnerships with local colleges.

Senate Bill 716 made its way out of the state Senate with bipartisan support and is now working its way through the Assembly.

The Chief Probation Officers of California came out against the bill, citing concerns about cost and logistics. The group has offered amendments, and a spokesperson says they support the spirit of the legislation and hope to reach a compromise.

Ramone has taken ethnic studies and psychology courses. He already has seven college credits transferable to the University of California and California State University. He earned both high school and college credit for the classes — for every college unit he earned three high school credits — and he’ll keep taking the courses now that he has his diploma. “It gave me an experience of college that made me feel good,” he says.

Giving kids in detention a positive school experience is a critical part of what the program is trying to do — it needs to dispel their formative negative associations with school. Young people like Ramone often have a punitive, disjointed school experience marked by suspensions, expulsions, transfers and time in detention.

A national survey of youth in detention found 61% had been suspended or expelled in the year before they got locked up; 12% had dropped out. Meanwhile, almost half were behind in school and 30% reported they'd been diagnosed with a learning disability, a rate six times higher than the general population. 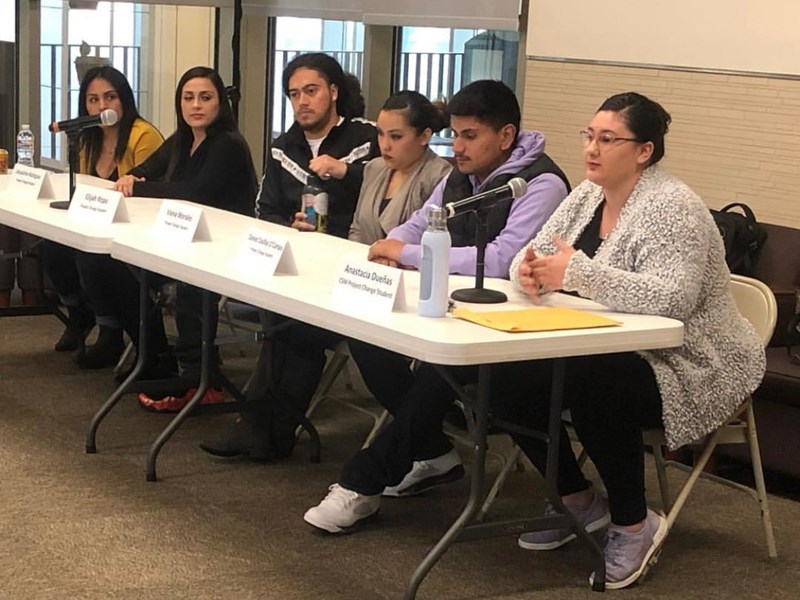 Project Change students hold a panel discussion on the program.Courtesy of Katie Bliss

'Nobody's telling these kids to go to college — that's not on the menu. But when you make that something that's embedded in what they are receiving, that's huge. This is very tangible; it's a very clear pathway.'

“It’s an identity cycle,” says Katie Bliss, who helped found Project Change and runs the program. “You go into the juvenile hall and you’re told, ‘We’re going to see you again,’ or you’re told, ‘You’re going to go to prison or jail.’ At that formative age I certainly bought into and believed all those things about myself.

Bliss was locked up at San Mateo County juvenile hall as a teenager, long before there were any college classes offered. “While you're there you're having this experience that's very demoralizing. It's hard to think about your future or striving for something.”

She says a fluke of fate led her to community college and out of the criminal justice system, while her brother, who’d also been in juvenile hall, wound up in jail.

Years later, as an English instructor at the College of San Mateo, Bliss wanted to find a way to spare young people from her brother’s path by giving them an alternative. She knew it wouldn’t be easy to reroute their lives, and that it would take more than offering college courses in juvenile hall.

Only 56% of court school students re-enrolled in their local school district 30 to 90 days after getting out of detention in 2011-12, according to the Youth Law Center report, while just 1% enrolled in postsecondary education.

When Bliss helped launch Project Change in 2015, her goal was to work with students in juvenile hall as early as their junior year of high school, facilitate their transition to community college and support them through graduation. Since it started, the program has served about 160 students.

“Nobody's telling these kids to go to college — that's not on the menu. But when you make that something that's embedded in what they are receiving, that's huge.” Bliss says. “This is very tangible; it's a very clear pathway.”

Project Change students get help signing up for financial aid before they leave detention, and the probation department allows students to visit the college to take a tour and to meet other formerly detained students before they’re released. That way, when they get out they’re ready to start school.

“You come to campus and you have a whole group of students here for you,” Bliss says. “You already know the faculty.” Students also get priority enrollment, free tuition and books, help paying for transportation and intensive counseling.

Seventy-six percent of Project Change students stay enrolled from one year to the next — almost 10% higher than the school’s overall rate.

Nick Jasso was locked up at San Mateo County juvenile hall in 2012, before the college classes started, and later got referred to Project Change at the College of San Mateo. He says the program gave him a new community when he needed one most.

“After I started changing the way I live my life, the hardest part for me was just being like extremely lonely all the time,” he says. “I couldn't hang around people who were selling drugs, so I just had to be by myself and it was hard because it was the people I grew up with, the people that I was closest to.” 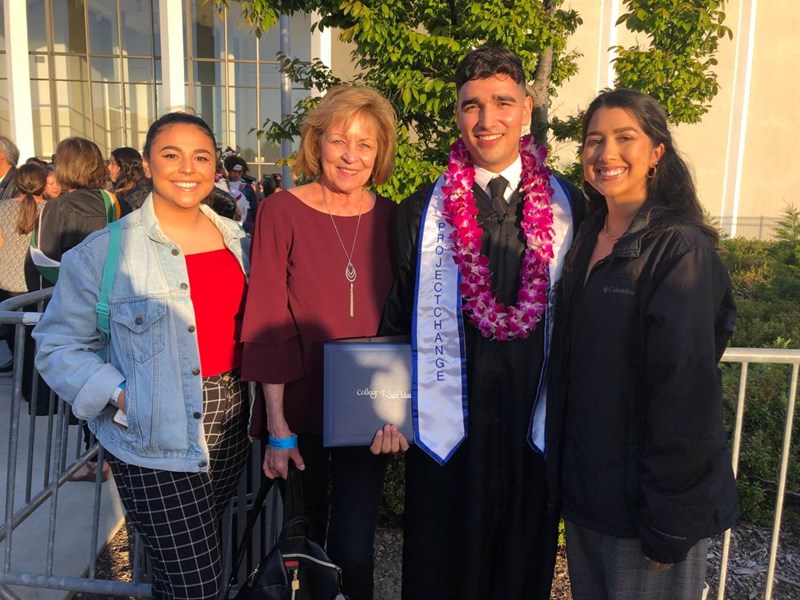 Project Change student Nick Jasso graduated from the College of San Mateo this spring and is transferring to UCLA.Courtesy of Katie Bliss

Through the program Jasso has mentored Project Change students at the juvenile hall and on campus when they get out. He has led trainings for college staff, and he’s spoken to lawmakers in support of requiring that college coursework be made available to kids in detention.

Jasso is transferring to UCLA this fall. When he graduated from the College of San Mateo this spring, his Project Change friends cheered louder than anyone else.

He plans to keep working with formerly incarcerated students at UCLA because he has seen how fragile success can be. “I think the hardest thing about mentorship on the outside is seeing people go back inside. Incarceration is a trap. It’s really hard to get out once you’re in,” Jasso said.

Hard for kids like Ramone at San Mateo juvenile hall, who’s turning 19 in a few months, when he’ll be transferred to county jail and his future in higher education will become that much more uncertain.