More Than 1,000 Families Still Searching For Homes 6 Months After The Camp Fire

Even before the fire, there was already a severe housing shortage and a growing homelessness crisis in rural northern California. The November disaster peeled back the band aid, says Ed Mayer, director of the Butte County Housing Authority, exposing just how vulnerable rural communities can be.

"We've really lost our ability to produce housing that is affordable to our citizenry and this is the larger tragedy," Mayer says.

Paradise, once a town of 27,000 people in the pine-cloaked Sierra Nevada foothills 90 miles north of Sacramento, was a cheaper bedroom community to the nearby college town of Chico. The area was also an affordable beacon for people like Dominica Sprague who said she'd been priced out of the San Francisco Bay Area.

"My family is gone, my community was my family," she said one morning outside her camper at the Yuba-Sutter Fairgrounds in Yuba City, Calif.

The fairgrounds is about an hour south of her former home in Magalia, above Paradise. It is the sixth place she and her family have moved to since November.

"I don't know how to describe it other than it's complete chaos," Sprague said. "We haven't felt safe anywhere." 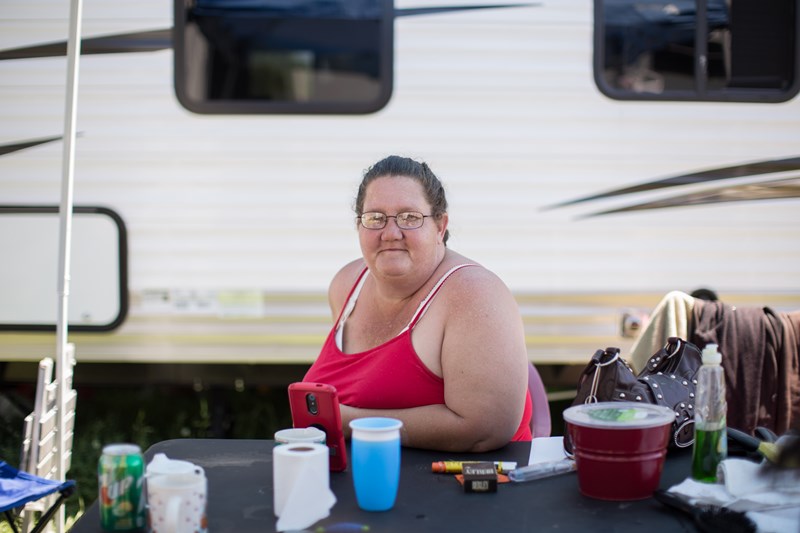 Dominica Sprague has been living with her family in a camper at the Yuba-Sutter Fairgrounds, in Yuba City, Calif.

Fire survivors can't seem to cut a break either. At the Yuba-Sutter fairgrounds, it's $750 a month to hook up and use the showers. But the Sprague family have to move again soon because most places don't let you stay more than a month. Where they will go next, she doesn't know.

"There's no place to go," Sprague said. "We were looking at parking on the side of the street with a bunch of other homeless."

Many survivors like Sprague, who says she relies on social security for income, were already living on the economic edge before the November fire. To hear them tell it, there's growing compassion fatigue in this already stressed region. There are stories of price gauging when it comes to campgrounds or possible rental units, and harassment directed at those who've parked their RVs on area streets. 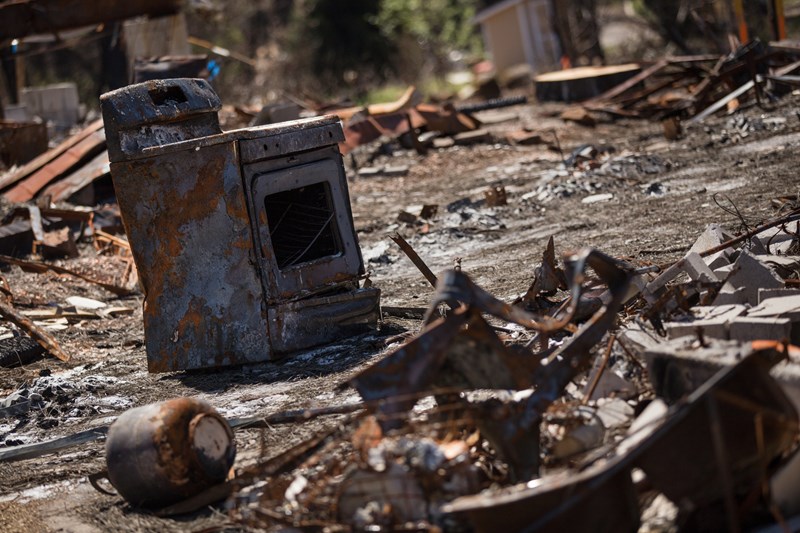 Debris from a burned home in Paradise waits to be cleared six months after the Camp Fire.

According to updated numbers from the Federal Emergency Management Agency, or FEMA, about $85 million in aid has been distributed to close to 8,000 Camp Fire survivor households, with another $370 million in disaster loans distributed since late last year.

Federal and state officials are now building temporary parks and communities to house hundreds of survivors in FEMA trailers.

While the official estimate is that 1,000 more units are needed immediately, it's widely believed that the actual housing need is higher. Some people displaced by the fire were living off the grid or unofficially in campers or single wide trailers in someone's yard or renting a room in a house off the books. None of these scenarios would easily qualify someone for official disaster aid.

These are the folks Stephen Murray is most concerned about.

Murray is 43, with buzzed hair, a neatly trimmed goatee and tattoos covering his arms. One you can't miss reads: "Only God Can Judge." For many in this tight-knit community, he's seen as a savior. He's taken it upon himself to raise money and help other victims. A typical day for Murray starts just after 6 am., his phone buzzing with texts from desperate people who need help. He tries to prioritize the "asks" that he knows he can deliver on in any given day.

One afternoon at a storage unit outside Chico — one of four in the area he has crammed full of donations — Murray unloaded a pair of new mattresses, still wrapped in plastic and looking for a home.

"I don't know what I'm doing, I just know that people need me and need the support," Murray said. "They need to see a smiling face everyday and that's what I try to give them." 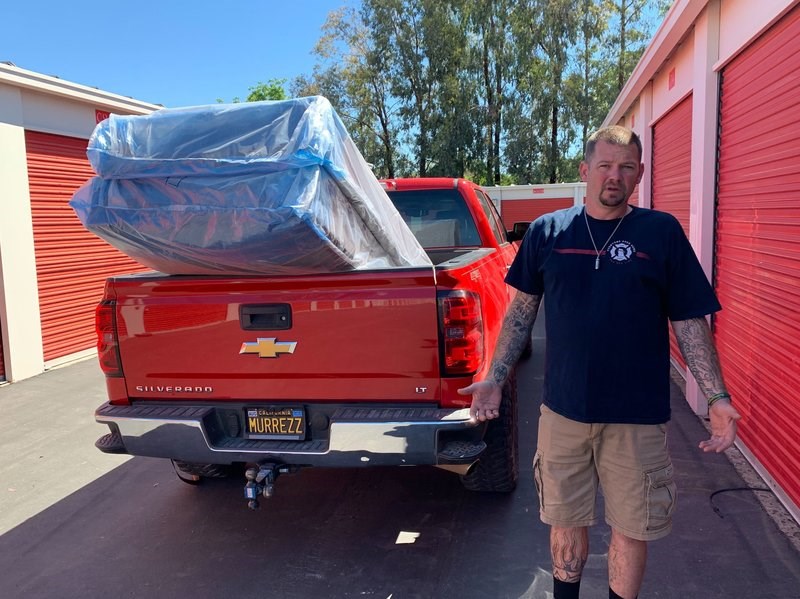 It seems like everyone knows Murray, who used to manage a mobile home community for seniors in Paradise that was leveled by the Camp Fire. Today he raises money for victims on various GoFundMe pages and is starting a non- profit to help survivors.

He also posts videos to Facebook Live at least once a day, asking for donations and updating the community on his efforts. These videos sometimes get up to a thousand views and scores of thankful comments. On a recent post, he streamed from a Home Depot parking lot asking for donations to help him build a ramp for a local woman who is in a wheelchair and suffered severe burns trying to escape the fire. In a later stream, he looks weary and tired and urges his followers to stay positive and work together.

"It's not like we were given a book that says when your house burns down, you lose your car and your job, here's what to do," Murray told NPR. "We're just kind of playing every day as it goes."

One day it's a Costco run to buy fans in bulk. The next day it's helping a former neighbor who's moving tow a camper up Interstate 5 to Oregon.

"It's mind blowing how some of these people are surviving and trying to get through life right now," Murray says. 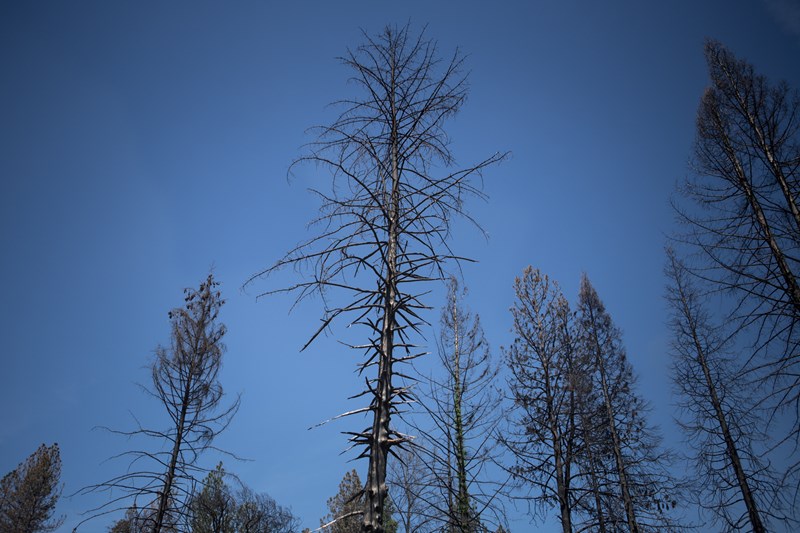 A burned tree stands in a neighborhood that was destroyed by the fire. Efforts to remove debris, including damaged trees, were delayed due to weather.

And Murray is one of them.

He and his young family have moved seven times in the last five months, from Sacramento, to Granite Bay and multiple places in Chico, plus Reno and Sparks in Nevada. They're currently camped out on his fiancee's stepfather's property about 20 miles north of Chico. Himself, his fiancee and their two young kids are all sleeping on the same king mattress.

It's clear that helping others is how he's handling the stress of his own personal crisis.

Many people who have had the means to leave Paradise after the fire have left. No one is sure exactly how many people remain — estimates range from the hundreds to a couple thousand. About ten percent of the homes in the area did not burn and many people have had to move back in because their insurance has run out.

For those who are left and want to see their town rebuilt, the past six months have been marked by one setback after another. First, bad weather slowed what's been a staggering debris removal effort — which officials say now could take up to three years to finish. Then came the news that the town's water supply was contaminated with cancer causing benzenes and other toxins, with estimates in the "years" to repair.

But if there's been one constant nightmare throughout this entire disaster it's the housing crisis.

Proposals to build FEMA trailer parks in the Chico area initially faced resistance from neighbors. Only one large site to house 400 trailers in the nearby town of Gridley is currently under construction. Local officials have scrambled to find any available space in any commercial campground or RV park or in lots that were spared by the fire in Paradise.

A proposal to build tiny homes did win recent approval in Chico. The mayor of Chico told NPR that they are scrambling to find housing where they can, and having to make up emergency housing plans as they go. "As scary as that sounds it's just a world that we have to get used to," says Mayor Randall Stone.

Fire survivors like Dominica Sprague know it will take years before Paradise is rebuilt, if it's rebuilt at all. 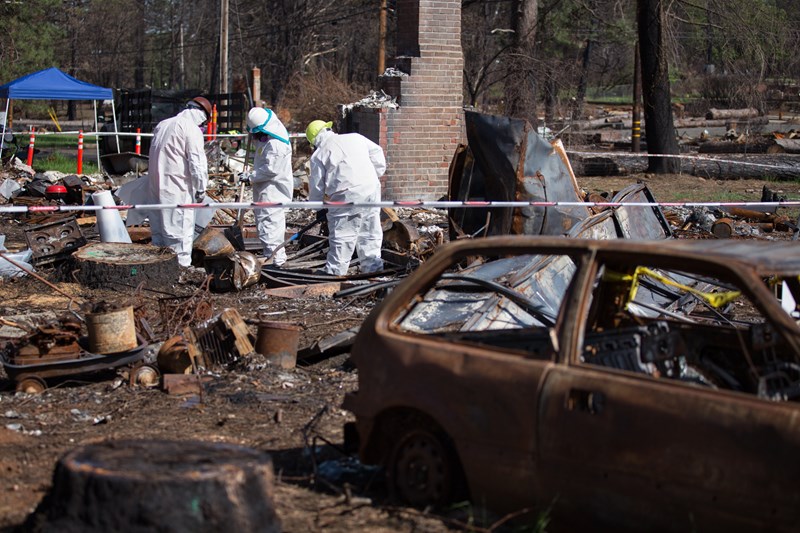 The deadly blaze has prompted tough questions about whether towns like Paradise that were built out into overgrown, high risk forests should even be rebuilt in this era of mega fires and climate change.

Sprague has more pressing issues on her mind, and probably isn't going to be able to wait to see whether or how Paradise gets redesigned.

"I understand you want the town back, I get that, I want it back too," she says. "But it will never be the way it was."

Meantime, she's looked everywhere in the area for an affordable place to rent. There is nothing for families like hers on a fixed income, she says. 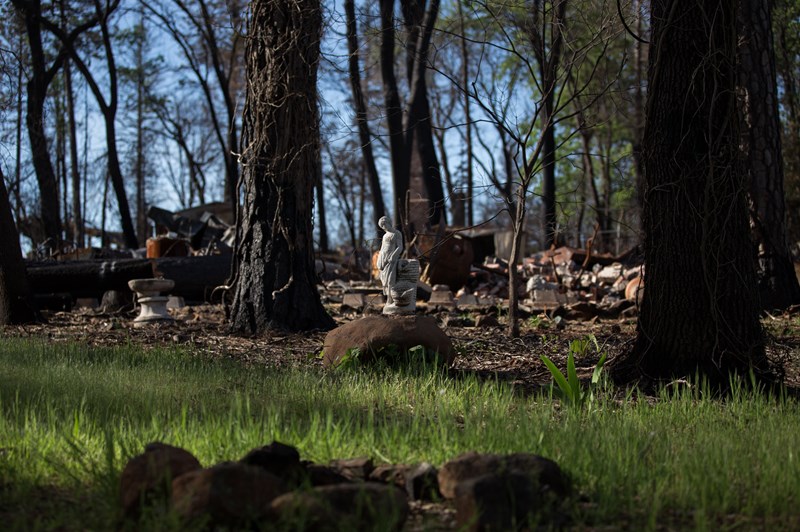 Grass and flowers have begun to grow back around debris in a neighborhood off Bille Road in Paradise. Some official estimates say the debris removal could take years.

Her plan is to leave California as soon as possible.

She's hoping to move to Arkansas. She's got family there and maybe a job. But first she's got to come up with the money to fix her Chevy suburban. It needs new brakes and transmission work.