Lawmakers needed an entire chamber, a balcony, and a long hallway on Tuesday morning to hold all the people who wanted to speak about when law-enforcement officers should be allowed to use deadly force.

Several family members of shooting victims waited in line during the three-hour hearing to speak in front of lawmakers:

“Yeah, my name is Stevante Clark, of the Stephon Clark family …”

Every year, it seems there’s a bill or two in the Legislature grips the Capitol in a way other measures don’t. For example: a vaccine mandate for school children in 2015, and the 2017 “sanctuary state” bill. This year, it’s the debate over when police can use lethal force.

Listen to Ben Adler explain what happened at the AB 392 hearing Tuesday:

That bill, AB 392, passed its first committee vote in the California Legislature on Tuesday — but not before it persevered through an emotional discussion.

In addition to grieving family members and community activists, the bill’s backers brought former law enforcement officers who now advocate for police reform. The measure by Democratic Assembly member Shirley Weber of San Diego would strengthen the legal standard for when officers can use deadly force from “reasonable” to “necessary.”

Former Los Angeles Police Department officer Cheryl Dorsey, who is now a police reform consultant, argued the bill is needed because some of her former colleagues neglect their training.

“Officers are using deadly force as a first resort — when they can’t catch someone, when someone is failing to comply — as opposed to a last resort, which is what officers are taught to do, after you’ve done everything that you have available to you,” Dorsey said. 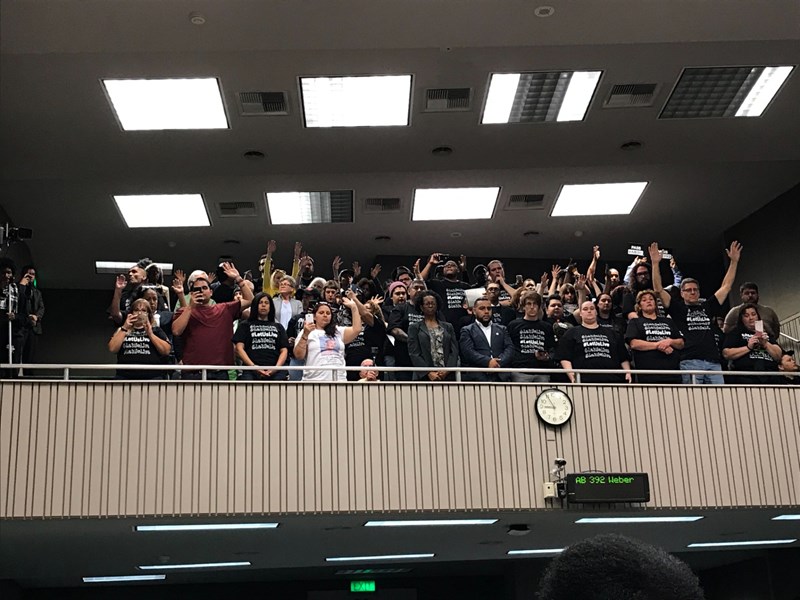 Citizens stand and sit in the balcony at a legislative hearing on AB 392 on April 9, 2019. The bill would change the rules governing use of deadly force by police officers in California.Ben Adler / Capital Public Radio

Jeff Noble, a use-of-force expert who previously worked as a deputy chief in the Irvine Police Department, argued the bill won’t put officers in harm’s way.

Opponents made their own legal and emotional arguments, including Sacramento County Sheriff’s Deputy Julie Robertson, who was wounded last year trying to protect her partner, 27-year-old Mark Stasyuk. He died when they were ambushed by a shooter at an auto parts store.

“At one point during the firefight, the gunman began shooting with only his back exposed to me,” Robertson said during testimony on Tuesday. “I recall in that moment thinking, ‘If I were to shoot him in the back, I would be the next officer in the news being scrutinized for my actions — despite the fact that he just murdered my partner, shot one of the store clerks, and also shot me.’”

AB 392 is opposed by law enforcement groups, which have introduced their own proposal.

“It thrusts the analysis from an objectively ‘reasonable’ standard to an after-the-fact subjective standard, with the benefit of 20/20 hindsight,” she said.

When it was lawmakers’ turn to weigh in, several shared personal stories that shaped their views of the bill.

Democrat Assembly member Sydney Kamlager-Dove of Los Angeles said she once returned home after her alarm went off to find officers inside — and feared that she — or her tall, dark husband — could be shot inside their own house.

“I will be supporting this bill. And I will be urging — urging — law enforcement to come to consensus, because this hurts. It hurts us all much more than it should,” Kamlager-Dove said while fighting back tears. 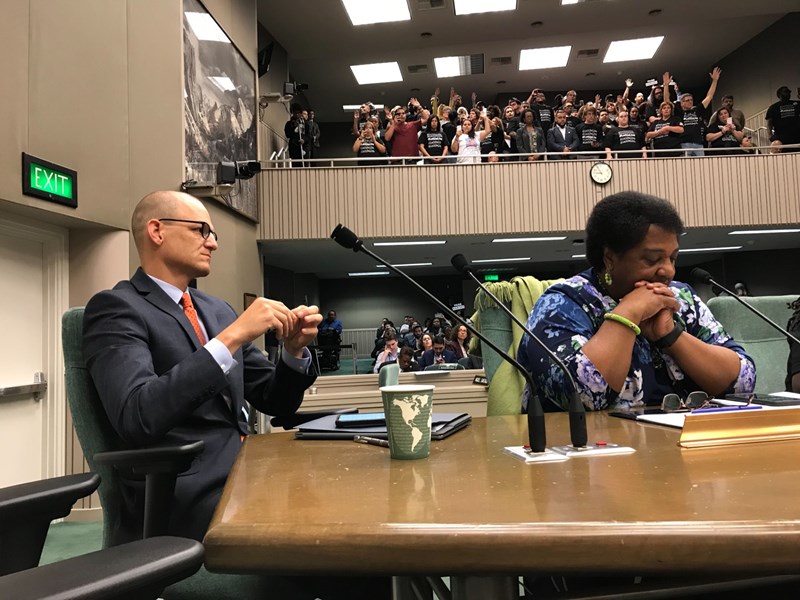 Assemblymembers Kevin McCarty, left, and Shirley Weber, left, the coauthors of AB 392, which would change the rules governing when police officers can use deadly force in California.Ben Adler / Capital Public Radio

The committee’s top Republican, retired California Highway Patrol sergeant Tom Lackey of Palmdale argued that no one can truly understand the decisions officers must make without living through those moments themselves.

“If we need to make some adjustments, let’s make those adjustments,” he said. “But anything that changes the word ‘reasonable’ and the ability to defend oneself is unreasonable.”

Some Democrats made clear that, while they believe something must change, the bill as written needs more work.

“The pendulum has swung too far in one direction, such that we aren’t protecting and holding accountable those who are taking life from our community members,” she said. “I do have serious concerns that the text of this language swings the pendulum too far in the other direction.”

Her view appears to have carried the day — at least for now: Instead of the expected motion to send the bill straight to the Assembly floor for a vote, it’s instead heading to the Rules Committee, where it’ll hang out while supporters and opponents work to find that precarious point where the pendulum holds steady.