In a patch of forest a few miles from Lake Tahoe’s shore, Susie Kocher and her family are crunching through the snow to find a Christmas tree.

She cuts down her own every year, going on a quarter-century, and this time she wants one with enough branches to put on “a ton” of ornaments. When her family finally finds the perfect tree, her grandson yells “Timber!” as it crashes into a few feet of snow.

“Basically, we have a family party every year,” she said of the tree hunt. “We invite them up and we have a potluck, and then get in the cars and drive to the permit location. People were huffing and puffing through the snow looking for the tree.”

Kocher bought a permit for $10 from the Lake Tahoe Basin Management Unit, which sold out its 2,000 permits in a matter of days this year. Nearly three-quarters of California’s national forests allow people to cut down Christmas trees from forest land. Christmas tree zones are purposefully staged near roads, so visitors don’t have to deal with extra snowy conditions.

"It's a great win-win solution,” said Kocher, who is also a forest advisor for the University of California Cooperative Extension for the Lake Tahoe area. “You get the public out in the forest, you do good work reducing the density of the trees."

In fact, Kocher thinks the tree-cutting program could be ramped up even more to further benefit forests.

“By removing some of the smaller trees, we are doing some of the work,” Kocher said. She says the larger trees grow, the more human resources, equipment and funds are needed to remove them, and that funds collected can be used for other forest-thinning projects. 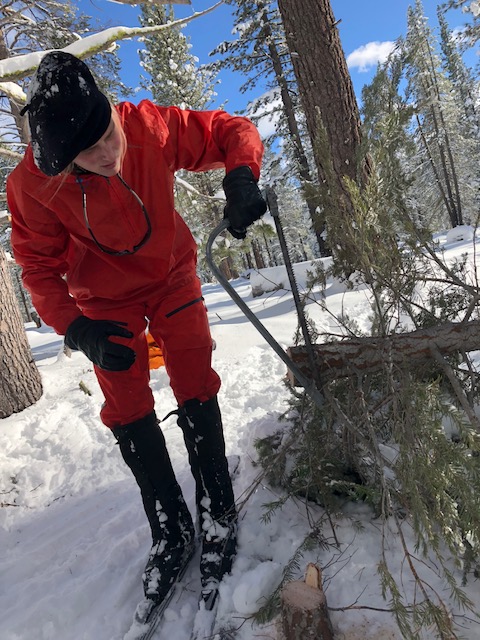 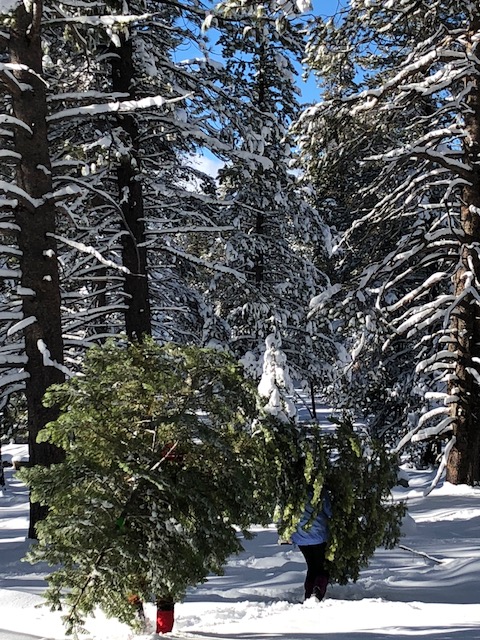 Susie Kocher has cut her own Christmas tree down every year for nearly 25 years. This year, she had help from her family, including her son Freeman George. Courtesy of Susie Kocher

But not everyone thinks that Christmas Tree permits are a realistic solution to managing forests.

“It’s great to have the masses come up during the holiday season full of mirth and cheer,” said Joseph Flannery with the Tahoe National Forest. “But I don’t think there’s the infrastructure in place to really make a dent in the hazardous fuels reduction needed.”

For example, there’s an acreage near Truckee on the Tahoe National Forest where 50,000 trees could be removed, according to Flannery. It’s on about 2,000 acres in a wildfire zone. But there are issues with getting that many people into the area, because of winter conditions and the administrative needs it would take to accommodate that volume of visitors.

"To create a more resilient forest, you’d have to remove all 50,000, and this year we sold 300 permits in Truckee,” Flannery said of the program, which limits the number of trees that Tahoe sells. “If we were to sell 50,000 permits, I just don't think it'd be feasible for 50,000 people to be driving this neighborhood to go collect trees."

Flannery says one way to increase the number of trees sold is by working with groups that could cut lots of trees and then offer them to the public. The Tahoe National Forest sold around 1,000 permits this year and plans on increasing sales next year and investing in an online reservation system. 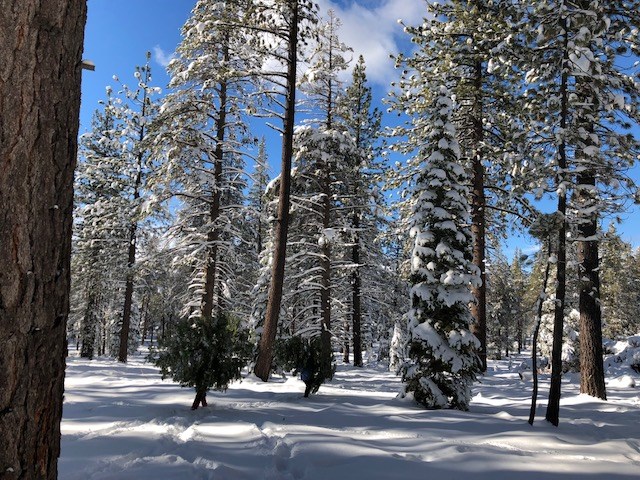 Another area grappling with forest management is the Eldorado National Forest, which sold out of its 4,500 Christmas Tree permits in 2018. Spokesperson Jennifer Chapman says the agency found problems with visitors cutting on private land and following guidelines.

“A lot of times, people find a tree that is taller than their living room and they’ll just take the top half of the tree and leave a four-foot stump,” Chapman said. “We still have a lot of education to do.”

She says the goal is to connect people to the land while clearing out some trees as “an added benefit.” If the program ramps up, it would be for the benefit of visitors, however, and not necessarily to clear out more small trees as a thinning tool to prevent fires.

The Plumas National Forest distributes between 9,000 and 11,000 permits a year, and it has no cap on the number it would sell.

"We have lots and lots and lots of small trees, but is it making a dent in thinning issue that we have? Not so much,” said Plumas National Forest Public Information Officer Lee Anne Schramel.

She also says people want the prettiest trees and may shun the Charlie Browns of the forest.

“[The prettiest trees people choose] are the ones that have their branches in the open and surrounded by sunlight not the crowded dense thickets that we need to remove,” Schramel said.