Should You Raise The Local Sales Tax? Voters In These Five Sacramento Area Cities And Counties Will Decide This Election.

A quarter-cent here, a half-cent there, a full cent over there: There are five sales tax measures before voters in the Sacramento region on Tuesday.

Those in favor of the taxes say they are needed to improve services. Opponents say governments are now being forced to pay the price after years of generous union contracts.

If they all pass, an estimated $135 million would go to the various government coffers each year.

Measure B in Roseville

In Roseville, where shopping is a key component of the economy, supporters of the half-cent Measure B sales tax blame Amazon and other online retailers for the city’s lackluster sales tax forecast: an increase by $2 million in 2018, which is smaller compared to previous years.

Mayor Susan Rohan discussed the measure while sitting outside a bustling coffee shop at a Roseville shopping center.

"We are looking at this from the standpoint of planning ahead, recognizing a trend and making sure that the city is going to have the revenue that it needs to have in order to deliver the sort of lifestyle that we've enjoyed in the past," Rohan said.

But Placer County Supervisor Kirk Uhler, speaking a short time later at the same coffee shop, said sales tax revenue had increased by $8 million each of the last two years and has doubled in the last decade. He said residents are being asked to pay for generous employee compensation packages that have increased at twice the rate of inflation.

"This is not about loss in sales tax revenue,” Uhler argued. “This is about excessive spending, and unfortunately spending on costs that will go on into the future.”

Uhler says Roseville’s pension and retiree health care obligations are less than 30 percent funded. “The city has not taken their pension obligations seriously,” he said.

According to Rohan, Measure B would likely raise between $16 million and $19 million annually. About $2.5 million, or 15 percent, would go to pension and retirement benefits in the first year.

Uhler said the average salary and benefits per employee a decade ago was $111,000.

CalPERS says Roseville is scheduled to face an increase in pension payments by $4 million next year. It also says the city’s percentage of salary contributions for pensions ranks 17th in the state.

Roseville is behind, among others the San Francisco Bay Area Rapid Transit, North Tahoe Fire Protection, and the Twin Rivers Unified School District, which is tied for first on the list at 28.762 percent.

In Yuba County, a similar sales tax, Measure K, would levy one penny for public safety and essential services for an entire decade.

Sheriff Wendell Anderson said he would like to spend his department's share of the $4.9 million revenue increase on more officers, homelessness, and more code enforcement.

"I've lived here my entire life and, due to various reasons, the quality of life in my opinion has just declined," said Anderson, who wrote the ballot argument in favor of the measure. 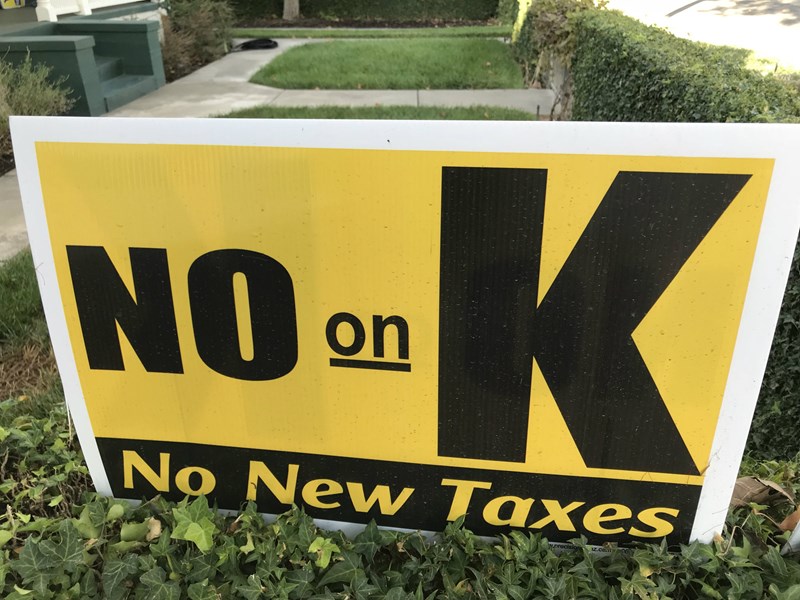 In Yuba County, Measure K would levy one penny for public safety and essential services for an entire decade.Bob Moffitt / Capital Public Radio

Lou Binninger oversees a graffiti-removal program in the county. He is against Measure K and other tax measures like it and wrote the opposition language in the ballot guide.

"They [governments] have agreed with the employee unions to pay defined benefit pensions that we can't afford,” he said. “When a person retires and gets 70, 80, 90 percent of their salary for the rest of their life, there's no way you can afford that plus the current employee in that position."

The Howard Jarvis Taxpayers Association has notified the county of a possibile lawsuit because of the ballot language. The group says the language indicates a specific use of the tax, which would require two-thirds of voter approval instead of a simple majority. The county says the language meets all legal requirements.

Measure U in Sacramento

City of Sacramento voters will also consider a full-cent sales tax, a permanent extension and doubling of the half-cent Measure U tax approved by voters in 2012.

Back then, council members promised that Measure U would restore police officer positions, re-open fire stations, and fund swimming pool and library services until the economy rebounded from the Great Recession.

Mayor Darrell Steinberg says voters have the chance to make economic development a priority in poor neighborhoods. "The combination of real public capital — combined with the private sector, the neighborhoods, business and labor — we can grow in ways that are going to make this city the cosmopolitan city we want it to be with more amenities," Steinberg said.

But Craig Powell with the watchdog group Eye On Sacramento wonders how much of the new Measure U will go to pensions.

"There's no legal requirement on how it's spent,” Powell said, adding that it could be “ vacuumed up to pay the legal bills of the city first and foremost before it does any discretionary spending like these various projects that the mayor has in mind."

Steinberg says the city has negotiated significant increases to the amount new employees contribute to their own benefits. CalPERS says the city's pension bill will increase by $13.6 million next year.

While some proponents are minimizing the idea that tax money would go for pensions, the proponents of Measure N in West Sacramento freely admit that's where at least some of their quarter-cent sales tax increase would go.

Quirina Orozco, the city's vice mayor, says the city has negotiated increased employee contributions to their own pensions. But she also says the city negotiated a $1.4 million increase to police officer salaries if Measure N passes.

"I think it's a good opportunity for our city to get ahead and move our city forward,” she said. “We have made tremendous strides over the last several years, and I'm confident that the passage of this quarter-cent sales tax increase will allow us to invest in the economic development and community improvements, as well as compensate our officers appropriately."

According to CalPERS, the city faces a $1.1 million increase in pension expenditures next year.

Folsom has a half-cent sales tax measure to raise $8.4 million a year for 10 years.

In 2016, Capital Public Radio, Cal Matters and the Los Angeles Times reported on the pension problems facing the state, “A series of pension enhancements, beginning with a 1999 law known as SB 400, has created a huge gap between the state’s obligations to current and future retirees and the capacity of public pension funds to pay them.”

Yosemite plans to drop its reservation system in summer 2023