Some fruit and vegetable vendors at Sacramento farmers markets are adjusting to a new reality this week.

Under a quarantine, they need to cover produce they bring to market — if it's a fruit or vegetable favored by a specific breed of fruit fly.

Here’s what to know about the pest plaguing the area and how it’s affecting growers.

What will be different at farmers markets, and why?

If you visit a Sacramento-area farmers market, such as the market at Cesar Chavez Plaza a few blocks from the state Capitol, you’ll likely see stalls with fruits and vegetables covered with plastic sheeting or mesh, or kept in plastic bins with clear lids.

That’s because a big chunk of Sacramento County — and a little slice of Yolo County — are under quarantine. County agriculture officials detected enough of a certain kind of fruit fly, known as the “oriental” fruit fly, that it triggered a quarantine by the California Department of Food and Agriculture. The agency says if this pest were to spread it could ravage California’s produce sector, and this little fly likes to feast on more than 200 kinds of fruit, vegetables and plants.

What steps are vendors taking to adapt?

Stephen Martinelli and his daughter Stephanie, who grow pears in Hood on the Delta, got crafty.

They draped mesh material over wire hoops, making a little tent over their fruit that shoppers can slip their hands underneath.

Martinelli described it as "inconvenient," but he gets why it's happening.

"They're worried about you coming in from outside the quarantine area and coming with your fruit and then oriental fruit fly hitchhikes a way out and then it spreads when you go leave,” he said.

Greg Beals of Beals’ Farm in Placerville has also started selling his fruit under mesh nets.

“Yesterday’s market was terrible, because I had it under plastic, and people couldn’t tell how gorgeous those pears were,” he said. “So I drove from Placerville back down to Joann’s Fabric in Folsom and found the fabric. And now everybody here is asking, ‘Where’d you get it, Greg? Where’d you get it?’”

On top of saving his produce, Beals has a personal reason for not wanting any fruit flies coming back with him to his ranch in El Dorado County: His daughter, who works for the agriculture commissioner, monitors pests for that county.

“I really don’t want her to come to my ranch and find a fly!” he said.

How is the quarantine affecting sales?

This is the first week of "covered markets" in Sacramento, so the impact is just beginning to be felt. Some produce sellers say they're having to work harder to get shoppers to stop, because being able to see and touch the fruit is a big part of the appeal.

Magda Morgan has sold fruit for Twin Peaks Orchard in the foothills for 30 years, and this is her first quarantine. She and her daughter, Amy Espinoza, were selling plums, pears, nectarines and jujubes at the Cesar Chavez Plaza farmers market Wednesday — all covered with mesh. 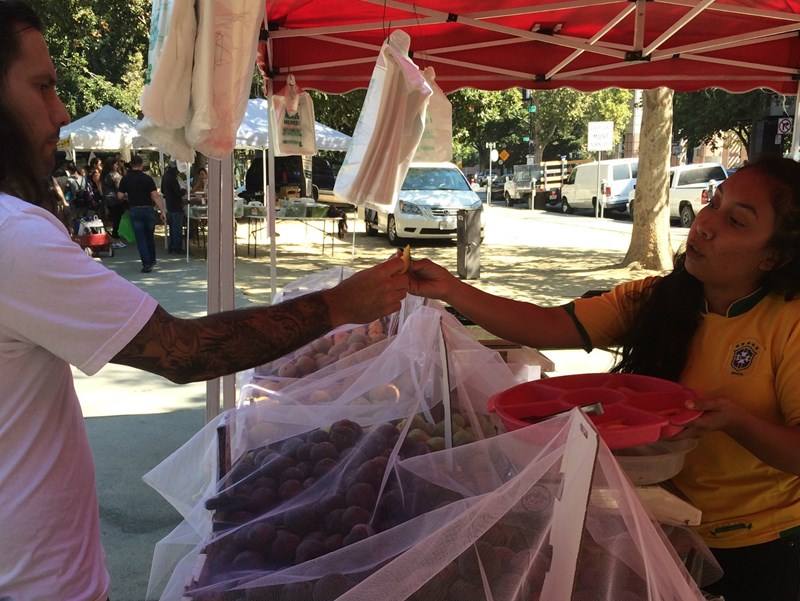 Espinoza said she talked to a lot of puzzled shoppers.

“I have to explain that to them that it's not necessarily in the fruit,” she said. “Because they're like, ‘Oh, is your fruit contaminated?’ And we're like, ‘No, the fruit is fine but we have to protect it from flies flying in the area.’ They get it, though, with some patience. Word will spread, eventually, that we're trying to do our best as farmers."

How will this affect vendors going forward?

State agriculture officials are warning the quarantine could last into early spring. Between now and then, there are several seasons, and each grower will face a different situation depending on what they grow.

One vendor who only had summer squash covered says they're OK for now, but when apples come in, they'll have to cover them and they don't know how that will go.

Stephen Martinelli and his daughter Stephanie who grow pears in Hood said the quarantine is going to slow sales until people get used to it. A lot of vendors echoed that sentiment. Several say they're counting on their regulars, who know them and their produce, to keep sales going until the quarantine ends.