While Jan gets ready for work — driving an Uber in San Francisco for the next 12 hours — his 4-year-old daughter Shukula barricades the front door of their two-bedroom apartment in Antioch, a far-flung Bay Area suburb east of Oakland.

“I need to work. Need to make some money,” Jan, 34, playfully tells his daughter. “No, you cannot,” replies Shukula, an impish smile spreading across her face.

That satisfies Shukula. She and the rest of Jan’s family — 9-year-old Sameera, 5-year old Mirwais and 9-month-old Wais, carried by his mother — follow Jan out to his car. He’ll be back at 2 or 3 a.m., long after his kids have fallen asleep.

When Jan and his family fled Afghanistan in 2015, he knew adjusting to a new life in California wasn’t going to be easy. His wife speaks very little English, and even after working as an interpreter with U.S. troops, his job prospects were limited.

But he never dreamed California was going to be this expensive.

The state’s skyrocketing housing costs have created a harsh new reality for refugees on the ground, many of whom are going to extraordinary lengths just to afford rent. The cost of living has increased so much in recent years that refugee resettlement agencies working in California are rethinking their strategies for relocating clients — and whether the state is a good fit for some refugees in the first place.

“I heard a lot about California out there in Afghanistan,” says Jan, who embedded with American soldiers from the Bay Area and other parts of the state. “They were saying California is nice. But trust me, I didn’t know anything about the rent and all these bills.”

California has long been a landing spot for refugees like Jan. Waves of Vietnamese, Iranian, Central American and other immigrants have resettled here over the past few decades, escaping persecution and turmoil in their home countries. More than 700,000 refugees have come to California since the mid 1970s, including more than 30,000 in the last five years, according to state statistics.

That history is partly why so many Californians pride themselves on their welcoming attitude toward newcomers displaced from their native countries. While refugee arrivals dipped dramatically last year under new Trump administration policies, the state’s progressive political leadership has repeatedly branded California as the refugee-friendly antidote to Trump, challenging the president’s actions to reduce refugee admissions and passing a “California Welcomes Refugees” legislative package last year.

But Californians’ welcoming attitude only goes so far.

“This is a really hard place to come, just because of the cost of living, especially the cost of housing,” says Avi Rose, executive director of Jewish Family and Community Services East Bay, the nonprofit that assisted Jan. 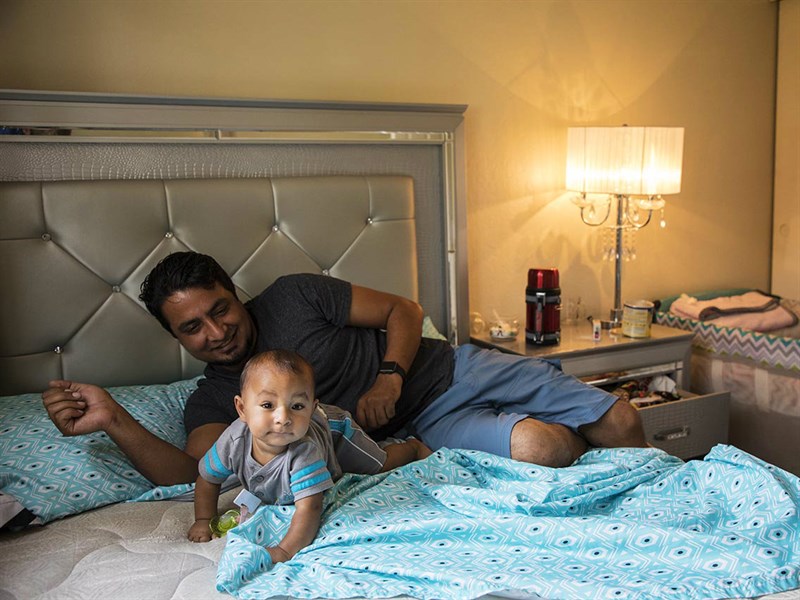 Most refugee resettlement agencies no longer place families in San Francisco because of the city’s high housing costs. In San Diego, long a leading destination for refugees, one resettlement agency was accused of placing families in apartments that did not have enough sleeping space and advising refugees to lie to landlords about the number of people in their family.

Last year, Jewish Family and Community Services East Bay resettled 183 refugees in the Bay Area, the vast majority coming from Afghanistan. Rose says his agency is moving more and more of those clients inland, away from pricier coastal cities.

That may mean cheaper rents, but it also means refugees may be farther from communities that share their language and culture.

“It’s particularly a problem with women, because the women are home usually with the kids,” says Rose. “They’re more likely to be isolated, less likely to be picking up English. It’s hard anyway, but it’s harder if you’re isolated geographically.”

That’s part of the reason Jan stays in the Bay Area, despite the high price tag. His brother lives close by, and there are other Afghani families in his apartment complex. That makes things easier on his wife, who doesn’t speak English very well and does not have a driver’s license.

Urinating in a bottle to save money

It’s the Fourth of July, and Jan is dressed for the occasion. He has a polo shirt with a small American flag embroidered on the chest.

His Uber’s patriotism is less subtle. It has a bald eagle decal on the top of the windshield. Another decal with the motto of one of the military units Jan worked with in Afghanistan is tacked on the back.

Beneath his car seat is a large plastic bottle. Jan doesn’t have much time for bathroom breaks during his Uber rides. It’s especially difficult to find a free restroom in San Francisco, where restaurants and gas stations typically only allow access to paying customers because of the city’s large homeless population.

So Jan will often pee in the bottle, typically in the backseat of his car, which has tinted windows.

Even though he worked with American troops and says he saw live combat, Jan is not eligible for veterans’ benefits. Neither are any of the other roughly 10,000 holders of “special immigrant visas” in California, a program designed for Iraqis and Afghanis who worked with the U.S. military.

It is frequently not safe for natives who worked with American forces to remain in their home country.

Little support from government, and nothing coming anytime soon

Special immigrant visa-holders and other refugees don’t get much in the way of government support. The federal government provides a little more than $1,000 in one-time cash assistance for each refugee family member, regardless of where that family is resettling.

So an Afghani family resettling in California gets the same amount per person as another family that relocates in Idaho or Texas, which have significantly cheaper costs of living. That cash assistance is supposed to pay for a security deposit and three months of rent.

Refugees are also eligible for safety net programs like food stamps, welfare and free health insurance for the poor. Jan’s family is on Medi-Cal, the state’s low-income health insurance program. He says the family used to be on food stamps, but in the month his eligibility was recertified his income exceeded the program’s limit. 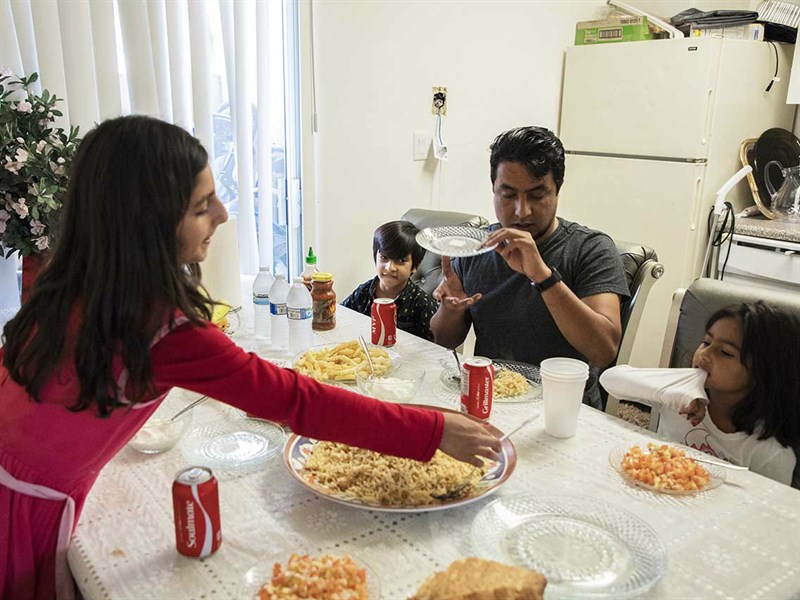 Nonprofit resettlement agencies provide important support in the way of English classes, locating refugee-friendly landlords and helping navigate school and government bureaucracies. But they typically don’t provide much in the way of direct cash assistance.

“Housing is a crisis for everyone in California frankly — seniors, veterans, folks who are disabled,” says Kevin McCarty, a Democratic state legislator from Sacramento who says the federal refugee benefits are probably insufficient. “But it’s especially hard when these refugee families are trying to make a go of it in their first few months here.”

McCarty has led the charge in the state Legislature to provide more state government support for refugees.

“There are so many people in California hurting for housing, I think we need to work on housing for everybody,” says McCarty. “I don’t see in the immediate future additional dollars for housing allotment for refugees.”

Happy to be out of danger, but a tough road ahead

Jan admits that every now and then, he’ll wonder whether he made the right decision to leave Afghanistan.

It was never safe for him and his family. But after working with American troops for five years, he landed a pretty good job with a private security company in his homeland, where he could work from home a good amount. He had a large house, much larger than the two-bedroom, one-bathroom place in Antioch. 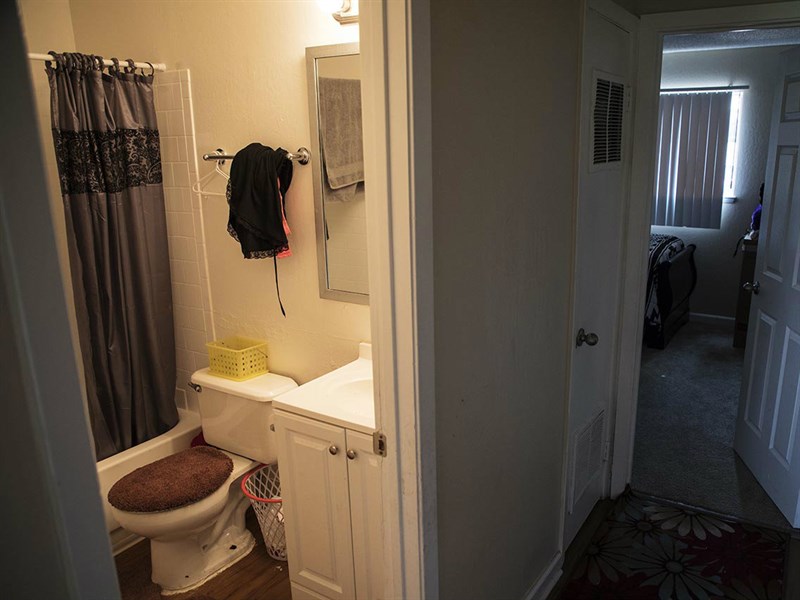 The bathroom the six family members share in their Antioch apartment. Robbie Short for CALmatters

But then he thinks about the real reason he says he decided to leave Afghanistan — what happened to his newborn daughter.

When Jan’s 1-month-old daughter started having trouble breathing, Jan and his wife took her to a public hospital in Kabul. Jan soon became convinced his daughter was receiving poor treatment because the hospital staff knew he had worked with American forces.

“I would say to the doctor, ‘Can you please tell me what’s going on with her?” says Jan. “And he was like, ‘Oh, she will be good, no problem.’ And then he would just walk away from me.”

Jan said he had to bribe nurses to give his daughter medical care. After 20 days in the hospital, he got a call from his wife. His daughter had passed away.

“As soon as I saw that I was like, ‘I’m not staying in this country anymore.’”

As he drives his Uber around San Francisco on July 4, he picks up two passengers by the ferry terminal. They’re Iranian refugees who recently moved to Texas, fleeing religious persecution.

They’re here on vacation, and start chatting in Farsi with Jan, one of the four languages he speaks. In English, they answer questions about how cheap the cost of living is in San Antonio. Jan says it’s not the first time he’s picked up fellow refugees vacationing from out of state.

Later that weekend, he decides not to take another day off the rest of the month. He can’t afford another penalty for paying his rent late. 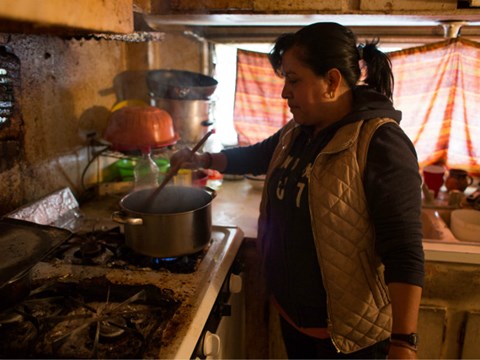 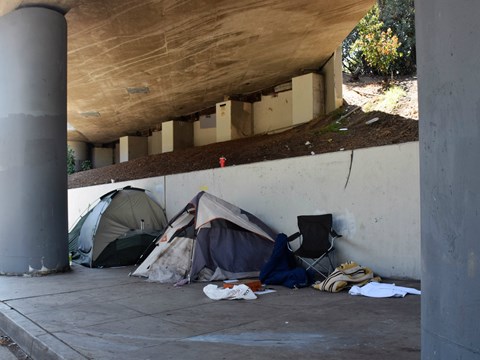