When Yosemite Met Starbucks: How The National Park Is Rethinking Its Identity Amid Tourism, Commercialization And ‘Selfie Traps’

Yosemite Falls is perhaps one of the most iconic spots the park. The waterfall cascades down the mountain — twice. It’s majestic. But across the street is the Yosemite Valley Lodge, and inside is a cafe opened earlier this year that epitomizes corporate America.

That’s how a barista welcomed me as I approached the counter of Yosemite’s first Starbucks. It’s next to the food court here, and while there’s no logo on the outside, inside it smells and looks very familiar. I’ve had a range of emotions about a chain opening up — but that didn’t stop me from ordering an iced vanilla latte.

Commercialization is changing Yosemite. More than four million people visit the park every year, and its identity is changing — some say not always for the better. How can we share Yosemite with the world while not ruining it?

The whole idea of a Starbucks made some people really mad. “I don’t feel that you should drive to Yosemite and say, ‘Oh my gosh, I’m going to go get a latte,’” said Fresno resident Kristy Page.

More than 27,000 people signed a petition opposing the Starbucks, which replaced an existing coffee shop. Freddy Brewster started it. He used to be a trail guide in the park for a nonprofit, and he described the campaign as “a shot across the bow to the park service to let them know people are paying attention to what’s going on.”

But the park service was also wary of Starbucks and had a few requirements for the store. “For example, there is no sign on the outside,” said Yosemite public information officer Scott Gediman. “We specifically wanted it to have it as unobtrusive as possible. Certainly we’re not hiding it, but it wasn’t appropriate to put a big sign up.”

Yosemite’s concessionaire is Aramark, which operates the Starbucks. It’s a massive company that provides food services to colleges, hospitals and concert venues. For the company, the contract with Yosemite is an opportunity to make a lot of money. For the park, it means rundown buildings get remodeled, which it otherwise couldn’t afford to do on its own.

Starbucks is a very visible way Yosemite is changing, but what's not obvious is what’s happening behind the scenes to improve the park’s sense of place.

That’s what UC Merced professor Catherine Keske studies. While hiking along the lower Yosemite Fall Trail, she ran into a large group of international tourists posing in front of the waterfall. You might call the scene a “selfie trap.” 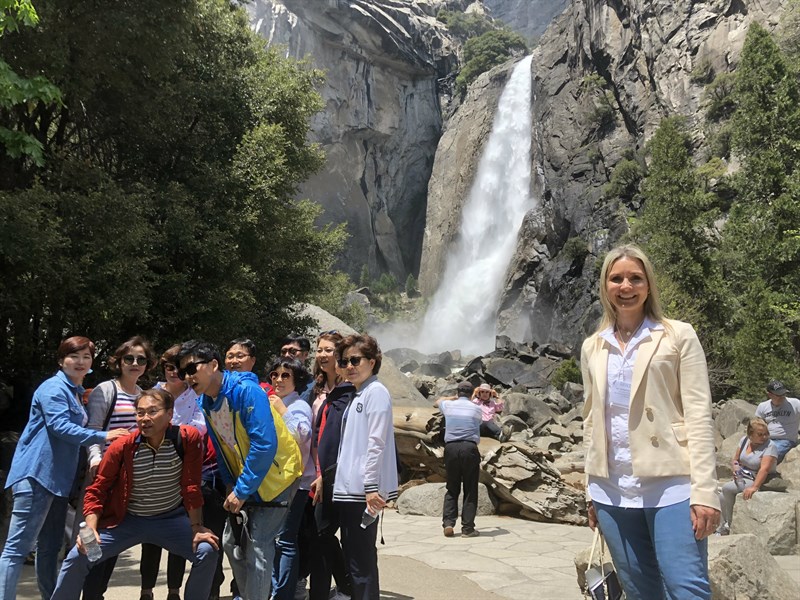 UC Merced professor Catherine Keske and a group of international tourists in front of Yosemite Falls — what some might call a “selfie trap.” Ezra David Romero / Capital Public Radio

“For a lot of people, this is probably their first time to Yosemite and perhaps it’ll be the only time that they come,” Keske said.

She wants to know how the visit creates memories and affects their perception of the park.

“We know there are a lot of crowds in Yosemite, but yet every year we continue to have more and more people,” Keske said.

“So, how does that affect sense of place?”

YosemiteLand is all about exploring how the region’s identity is changing as tourism, technology, fire and traffic alter the landscape. Subscribe wherever you listen to podcasts, or visit CapRadio.org/YosemiteLand.