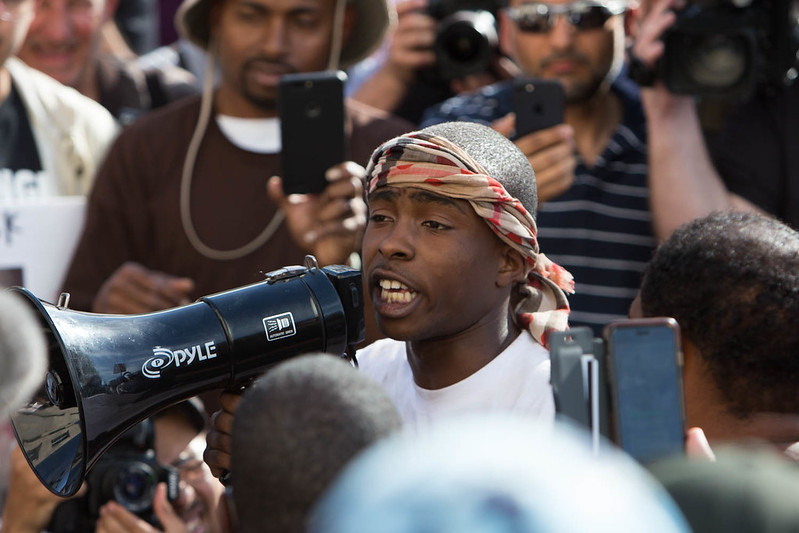 Early Thursday, crews attached green cloth to hundreds of feet of temporary chain link fence around Golden 1 Center. In mid-afternoon, about three dozen police donned helmets with shield and waited for what they believed would be a third attempt to enter the arena by people protesting the Stephon Clark shooting.

Despite the precautions, thousands still came to the arena.
Ame Mathies is a season ticket holder. She says she was going to see this game.

"I understand totally their message. I know the pain. We've had years of pain like this. But, I'm trying to move on," she said.

Some, like Mark Honeycut, thought about not coming. He has to travel two-and-a-half hours to games.

But, the demonstrators never came to the arena. Two blocks away, Black Lives Matter leaders and Clark's brother called on protestors to leave the Kings game alone.

On Wednesday, the Kings announced a partnership with the Build Black Coalition and Black Lives Matter.

The Kings promise to make a sizeable investment in poor communities as well as create a scholarship fund for Stephon Clark's two young children.

The downtown protests have ended without any arrests or incidents, according to the Sacramento Police Department.
Kings fans were able to enter the game without disruption, although Capital Public Radio reporters suggest that attendance might not be as high as usual.

After blocking 8th Street at I and J for over an hour, the protest for Stephon Clark is moving back to the Sacramento County District Attorney’s Office, where it began at 3 p.m.

And now it looks like the protest is winding down for the day. After blocking 8th St at I, then J streets fe well over an hour, crowd now heading back to @SacCountyDA’s office where the protest began more than 3 hours ago. pic.twitter.com/ZtLOmwDfob

Around 200 protesters are gathered at 8th and J streets in downtown Sacramento.

The group moved on from the federal courthouse after learning Rev. Al Sharpton was headed home and would not be appearing as previously reported. They marched up I Street, holding for a period of time at the intersection of I and 8th streets, where they blocked evening-commute traffic, including the light-rail. Despite verbal confrontations with police, the protests have remained peaceful.

Fans have been able to enter the Golden 1 Center without incident.

Very noteworthy how both @SacPolice and #BlackLivesMatter organizers are working to de-escalate situations before they get out of hand. Earlier, police retreated from a standoff. Now, organizers called a breakout group of protesters moving amid cars back into the main crowd. pic.twitter.com/C8X00ViGiO

Fans are entering @Golden1Center without a hitch since Kings deal with Stephon Clark protestors. More at @CapRadioNews pic.twitter.com/IZ3XnqgvnX

CapRadio’s Ben Adler reports that Black Lives Matter’s Tanya Faison has announced that Rev. Al Sharpton will not be speaking at the federal courthouse, and has actually left Sacramento.

So now @tanyafaison tells #BlackLivesMatter protesters at the federal courthouse who came to see Al Sharpton that he’s actually on a flight home. (Whoops.) She suggests protesters don’t try to block fans entering the Kings game but instead block I Street here at 5th in rush hour.

Meanwhile, some protesters have moved to Golden 1 Center as fans arrive before tonight's Kings game, scheduled to tip off at 7 p.m.

Stephon Clark’s brother Ste’Vante Clark has taken over the activist’s megaphone and is urging them to stop blocking traffic and stop criticizing Mayor Darrell Steinberg.

On Tuesday, Ste’Vante Clark disrupted city council’s open forum, taking over the mic and delivering an emotional rant, asking for the city to build more services in South Sacramento.

The Rev. Al Sharpton is now expected to speak at the federal courthouse at 4 p.m., according to an announcement from Sacramento Black Lives Matter chapter founder Tanya Faison to protesters in front of the DA’s office. Demonstrators there are expected to march to the courthouse.

#BlackLivesMatter #StephonClark protest holding steady here at federal courthouse. We’re told Al Sharpton will be here but no sign of him yet. Only one block of I Street is closed, between 5th and 6th. I-5 onramps are currently open. pic.twitter.com/7JOs4Jlv85

Sacramento Black Lives Matter chapter founder Tanya Faison is at the DA’s office. She says she doesn’t think that the protest will be marching through the streets tonight, but that “nothing that we do is ever planned.”

And with a chant of “Say his name! (#StephonClark!)” the #BlackLivesMatter protest outside the @SacCountyDA’s office is under way pic.twitter.com/Viz00tYgUD

Protests of the Stephon Clark shooting are scheduled to continue for a third-straight day on Thursday.

Activists will again target Sacramento’s top prosecutor, District Attorney Anne Marie Schubert. They want to her to charge the two officers that shot Clark with murder.

Near the DA’s office, police presence and security is high at the Golden 1 Center, where protesters have blocked fans from entering games twice in the past week.

The protests come after an emotional funeral where family, community leaders and Rev. Al Sharpton spoke in memory of Clark.

Follow this story for live updates throughout the evening.