“The California Dream of two or three generations ago was, `I’m going to move from a place that’s cold and flat to a place where there’s lots of opportunity,’” said Joel Kotkin, a presidential fellow in Urban Futures at  Chapman University in Orange. “`I’ll get a job in an aerospace factory, in an oil company. I’ll buy a house with a pool. I’ll die and go to heaven. And I’ll do it all in good weather.’”

Today the weather remains. But access to the California dream is being choked off.

Stratospheric housing costs, the exit of key companies and the failure to replace the jobs that left with them have downsized the state’s middle class.

Since 1970, California’s share of the middle class fell from 60 percent to just over half the population. That trend almost mirrors patterns across the country. The number of middle-income Americans slipped from 61 percent in 1971 to 50 percent in 2015, according to the Pew Research Center.

In California, some have risen to the upper class and others have slid down. And some have left the state.

Between 2007 and 2016, California lost 1 million more domestic residents than have come into the state, according to the IRS. Many are moving to Texas, Arizona, Nevada and Oregon.

“California opened their doors and basically kicked us out,” Kelly Rudiger said. “We couldn’t afford to live there with almost half of our income paying for our housing, our property taxes, our utilities so my husband and I both being full-time employees, we could keep up but we could never get ahead.” 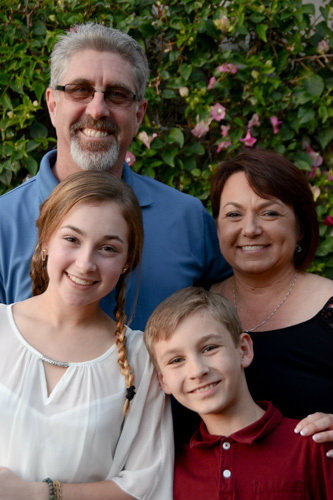 The Rudiger family -- Tony, back left; Kelly, back right; and their children Renae and Branden Bingham -- moved to Texas in 2017 because San Diego was no longer affordable for their middle class family.  Photo credit: Kelly Rudiger

Rudiger and her husband, Tony, moved their two children to Texas last year.

She said her middle class income goes a lot further in Texas than in California.

The Public Policy Institute of California classifies middle income earners  as those making between $49,716 and $174,006 based on 2017 calculations.

Kotkin said California families used to pay three times their income for a home in 1970. Sometime over the next decade, it changed and now that figure has jumped to as high as 10 times.

“Who has got that kind of money?” asked Kotkin. “Where I live, all the older people keep complaining, `My kids keep visiting me just waiting for me to drop dead so they can have the house.’ ”

“Even though as a whole, our economy is successful in terms of what it’s producing and the amount of wealth it’s producing, we’re not seeing that translate into incomes that will support families here in San Diego and across California,” he said.

And he believes that is not economically sustainable.

“When people have stable, middle-class incomes, it means they have money in their pocket to consume all kinds of goods, whether that’s purchasing housing, buying new clothes, buying cars, buying refrigerators,” Brownell said. “Our economy is driven by consumer spending.”

Kotkin said California’s middle class started to dwindle when the Cold War ended in the 1990s, devastating the state’s aerospace industry. California has lost 280,000 aerospace jobs over the last 30 years, according to the book “Blue Sky Metropolis: The Aerospace Century in Southern California.”

“Toyota, Occidental Petroleum, Nissan, companies that employed a large number of middle class people, are going,” Kotkin said. “These were companies that had a lot of good paying jobs — $80,000, $100,000, $120,000 — enough to support a middle class lifestyle.”

And he said many companies that remain are not expanding because of California’s land, energy, housing and regulatory costs.

The Center on Policy Initiative’s Brownell said the companies that are expanding are contributing to the state’s income inequality.

“Here in California, we’ve had great success in creating highly skilled, high paying jobs in the tech industry in Silicon Valley and in San Diego the biotech industry,” Brownell said. “A lot of those really successful and well-paying industries have built into them a structural demand for low-wage work as well, the nannies, the restaurant workers and the drycleaners.”

Brownell said it is important to note that even people earning more than workers in low-wage jobs are struggling to survive.

Sharon Mintz runs a floral arrangement business in San Diego. She said she offers free meals to her employees and has increased their pay from $15 to $20 an hour over the past few years but still cannot hold on to them.

“It works and then the rent goes up,” Mintz said. “And then we offer a little bit more and then groceries go up. It feels like we’re always trying to catch up.”

Brownell said a middle class revival lies in the hands of government, strong unions and companies.

He said policymakers need to encourage the creation of quality jobs in the state. Unions set standards for wage and working conditions. And Brownell said companies with healthy profits should pay their employees more.

“The more prosperous a company becomes, the more of an obligation it has to share its success across the company,” Brownell said.

Without any fixes, Kotkin said California is headed away from the enchantment of the 1950s toward a more primitive time.

“Today, we have a society which over time is becoming more and more feudal with the very rich, very successful — some of the richest people in the history of the world — at the very top, and then a diminishing middle class,” Kotkin said. “And what’s more frightening is you have young people, some of them with college educations working at Uber, working at Starbucks, essentially barely making it.”