Who wants to grab a broom, some mismatched shoes and a 40-pound chunk of granite?

The Wine Country Curling Club hopes that you will — and soon. The group has been holding a "Learn to Curl Night" every week at the Skatetown in Roseville in anticipation of the 2018 Winter Olympics in Pyeongchang, South Korea. Club members say their ranks swelled from about 60 to 100 people four years ago, and they hope to see an even larger increase this year.

Makenzie Shivers and her dad, Jeff Shivers, are from the Sierra foothill town of Rescue and attended a learn-to-curl event.

"My dad watches curling every day. He always says he'd like to try it," she said.

So, she made her dad a "learn-to-curl" Christmas gift card and put it in an envelope with a bunch of rocks. (Her mom Jacqueline Shivers, says the rocks actually had nothing to do with curling.) "He tries to guess his gifts," she said. 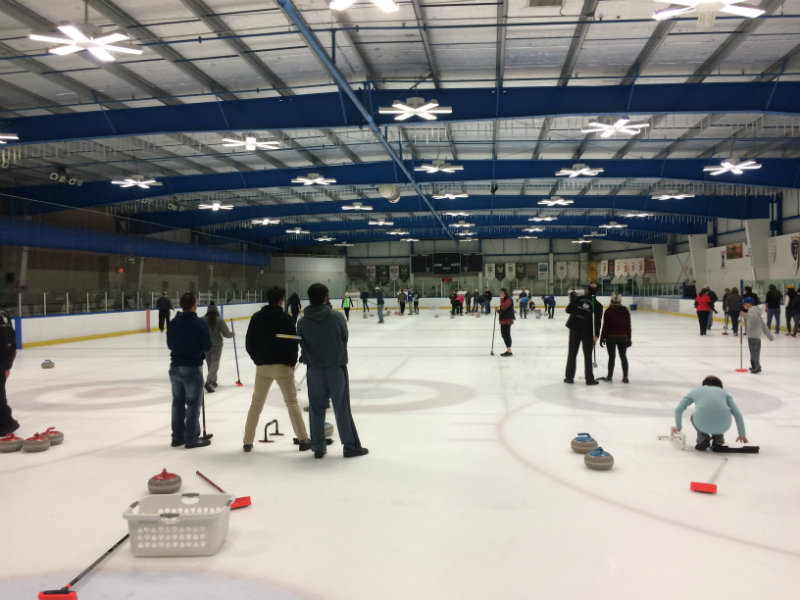 The Wine Country Curling Club has been holding a "Learn To Curl Night" every week at the Skatetown in Roseville in anticipation of the 2018 Winter Olympics in Pyeongchang, South Korea. Bob Moffitt / Capital Public Radio

Evan Elliott is tall, bespectacled, bearded, beanied and bats about curling. He handled the safety briefing at Skatetown.

"Don't pick up the rock” unless you want to risk crushing a few toes, he said. The other piece of sage advice: "Tuck your chin" if you're going to fall.

That was followed by a dissertation on why water droplets are sprinkled on the ice before the curlers arrive; the droplets freeze and keep the rock from suction-cupping to the ground.

And then, it’s off to the rink.

Camren Spangler is Jeff Shivers’ instructor. Every shot begins with one foot on a starting block, similar to one you would find at a track and field event. The block is called a "hack."

“Super important,” he told the group of 30. “Step into the hack first.”

Teflon is slippery. So is ice. Jeff Shivers put too much weight on the teflon and wobbled before correcting himself. He crouched, leaned on a stabilizer made from several pieces of PVC pipe that have been glued together, and then pushed the rock forward.

The stone makes a surprisingly quiet grinding noise as it slides across the ice.

Jeff Shiver’s first foray: victory. I asked him if it was a total victory or a moral victory. “I didn't fall. So, it was a physical victory,” he said.

Soon, it was my turn. Fellow learn-to-curlers Nancy and Mark Glatt watched as I stepped on the slider first, then started to crouch.

"No no! Stand up!” Nancy Glatt yelled at me. “You're going to kill yourself, buddy. Get off the slippy. Off the slider. Hack first."

(Got it. Hack first, then slider, then broom, and off I went.) 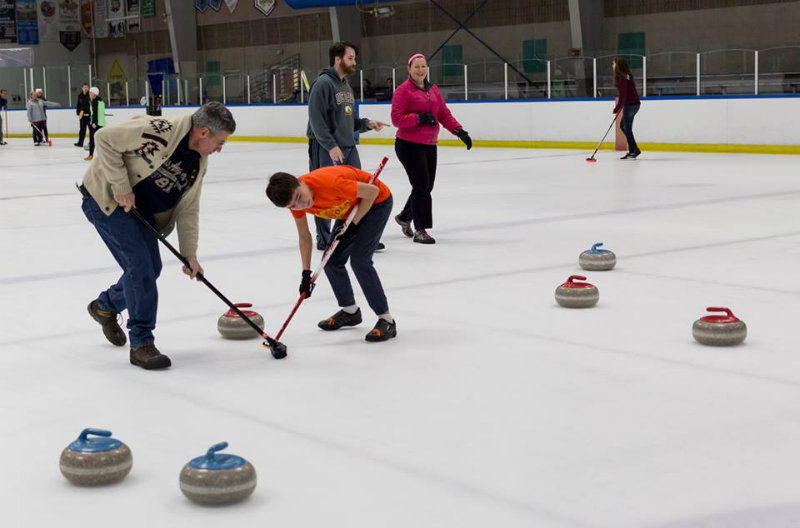 Elliott did the play-by-play: "Pushing out and a big weight throw. It may take out that rock which is gonna look cool, but it's also a free guard violation."

Lessons abound: Turns out, you may not launch a stone at maximum velocity to wipe out another stone until later in the match. Or, as Elliott put it: “The first two rocks can't be removed from play until the fifth rock thrown."

I might have avoided such a faux pas had I asked Larissa Spangler. She had the task of leading this team of 8-, 10- and 47-year-olds. She looked worried as an opposing player released a rock — until the rocks clanked together.

"Yes!" she said. “They were trying to go for a takeout, which means knocking that stone out but it was too light, there was not enough weight, so it moved ours forward. Now, I think I'm gonna set up a guard to make it harder for them to get towards the center."

Next, it was my turn to sweep a path for the rock, and Nancy Glatt's turn to yell at her new friends.

I asked her if she’s enjoying this. Her response:

Instructor Katie Feldman said sweeping also includes watching where you're going. I brushed a stone in passing, which is a rule violation.

“You did touch that rock,” Feldman said. “That would have been a burned stone.”

Burned stones are removed from play. Curlers are on the honor system. So, no “accidental” touching to remove a bothersome stone.

Spangler said bad things like burnt stones happen, but never on purpose, and you never hope for something bad to happen.

“You never root for the other person's rock to go out. You never do that. Ever,” she said.

Nancy Glatt missed that part of the introductory talk. “Sweep sweep, yeah, baby!” she hollered. And, as an opponent’s stone slid away, she issued a “buh-bye!"

She seemed slightly disturbed when told taunting is frowned upon.

Olympic curling starts Feb. 8, the day before the opening ceremonies. Mixed doubles is an event for the first time.

But curling has been a paralympic sport for years. A teammate held Jared Peppers' wheelchair as he pushed and turned a rock with a stick that's like an outdoor shuffleboard cue.

“I gotta work on my form,” he said. “You can release it to [10 o’clock to turn counter clockwise or (2 o’clock] to turn clockwise." 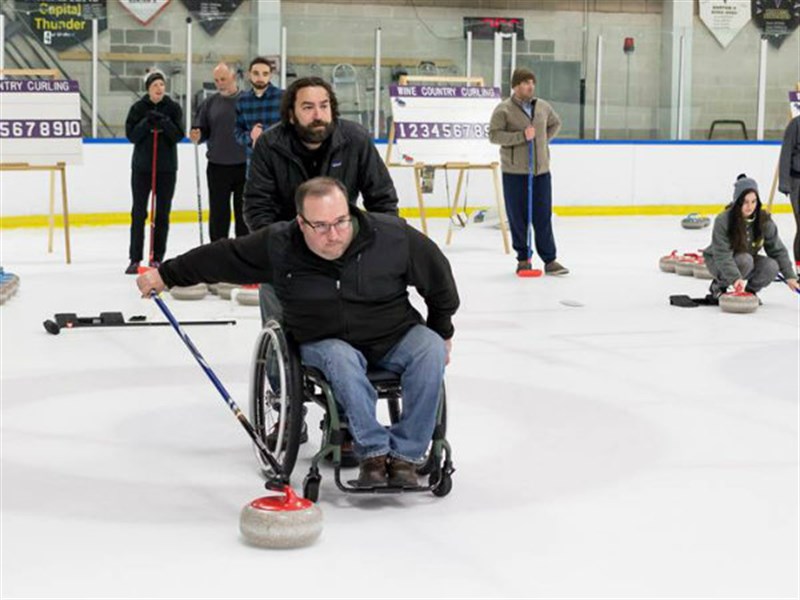 Randy Cohen holds Jared Peppers' chair as Peppers prepares to curl his stone. Because Peppers does not sweep for teammates, they do not sweep for him. Bob Moffitt / Capital Public Radio

He says friends recommended he try the sport. I asked him if he’ll be back. “I hope so,” he said.

The winners buys drinks, also called "broom stacking." You can guess how team Free Beer did.

The Shivers family is now known as the Stone Crushers. Jacqueline Shivers scored first and her dad had the winning shot.

"It curled right around the guard,” he said, “and knocked their's out.”

Call that a win for the Wine Country Curling Club, and for the sport. 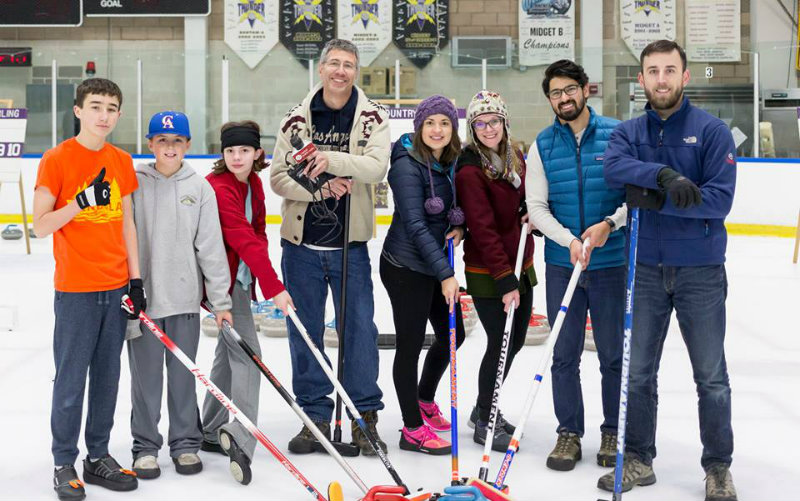