Pharmacists Poised To Ease Physician Shortage, If Only They Could Get Paid For It

Behind the cash registers in an expansive blue-roofed pharmacy about 30 miles outside of Bakersfield, two huge machines are whirring away, filling little plastic bottles with pills, tablets and capsules of all sizes and colors.

“These are robots, auto-fill robots,” says Brian Komoto, the CEO of Komoto Pharmacy in downtown Delano. “If [pharmacists] want this prescription, they scan it, it shows what the tablet should look like so they can compare, and then they cap it.”

A pharmacist and entrepreneur, Komoto’s worked hard to make his pharmacy stand out. He offers wheelchairs, walkers and other aids that typically aren’t available at retail pharmacies—and he was an early adopter of those fast-moving, prescription-filling robots that improve efficiency behind the scenes.

“We try to think of: How do we raise our game? I want to be the Disneyland of pharmacy if I could,” he laughs.

Komoto is particularly excited about a new opportunity that could allow pharmacists across the state to up their game. Thanks to a law enacted in 2014, pharmacists have been upgraded from medical professionals to providers. They’re now in a position to manage some of patients’ medication-related needs, which would allow doctors to spend more time on other medical issues.

Physician shortages are a national problem. By some estimates, the United States will need at least 40,000 more doctors by 2030. The problem is even more pronounced in the San Joaquin Valley, which is already home to 35 percent fewer primary care doctors than the federal government recommends. 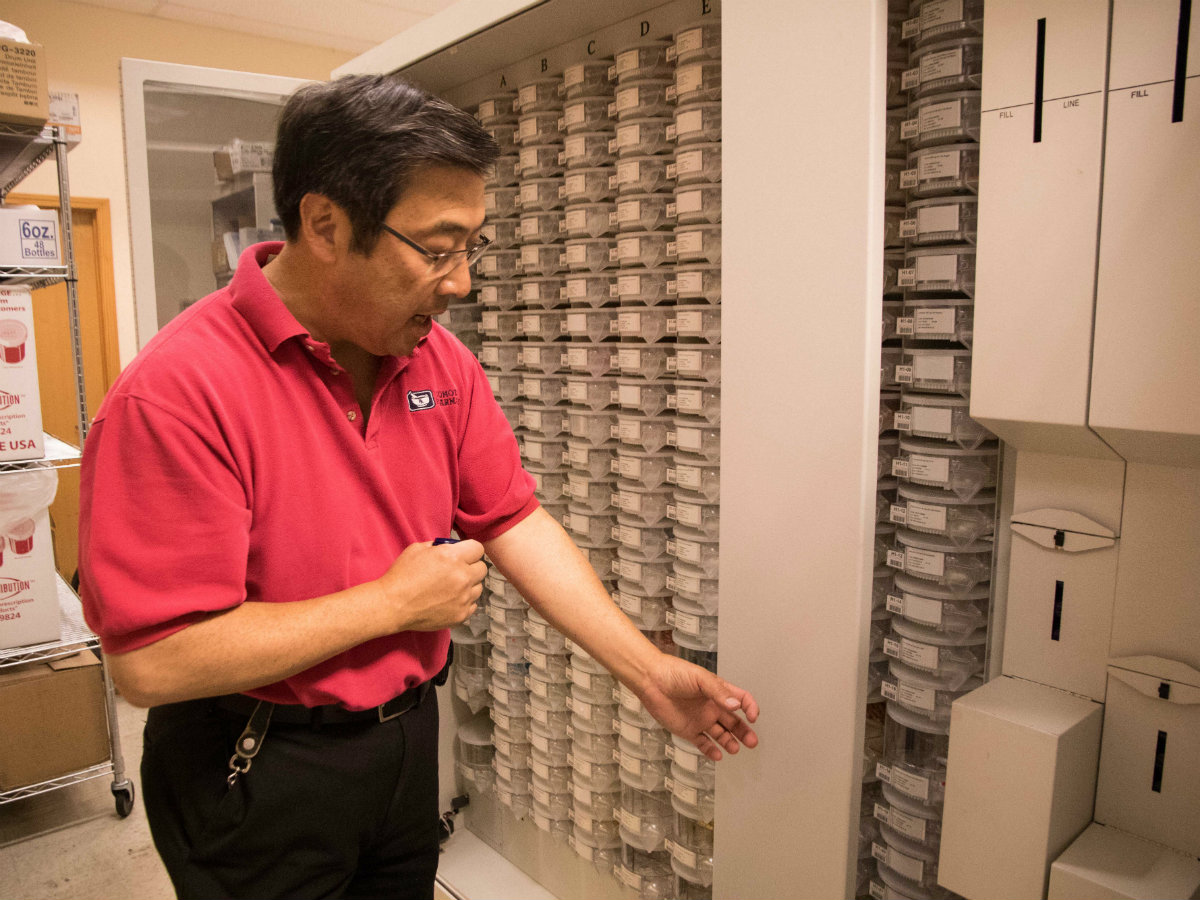 In anticipation of being reimbursed for the new responsibilities authorized by SB 493, Brian Komoto is already creating space for private patient consultations in Komoto Pharmacy in Delano. (Kerry Klein / Valley Public Radio)

But Lisa Kroon, chair of the department of clinical pharmacy at UC San Francisco, says one major obstacle still stands in their way: Money.

“We are not recognized by Medicare, or CMS, and that limits us in terms of billing for our professional services,” she says. And until that gets resolved, most pharmacists won’t be embracing their new role.

At a basic level, Senate Bill 493 sets out to make better use of what many say is the most accessible health care practitioner out there. After all, asks Virginia Herold, executive officer of the California Board of Pharmacy, what other practitioner can you see in your neighborhood, without an appointment, regardless of insurance?

“I think their role in the health care field is tremendously underutilized,” she says. “It's not just what I'm saying, it's part of what led to the enactment of SB 493.”

Because of this law, pharmacists can now offer a handful of drugs without a prescription, including travel medications and immunizations. And it led to other laws that allow pharmacists to furnish birth control and the opioid overdose drug naloxone.

With some more qualifications training, pharmacists can also apply for an additional license to become an “Advanced Practice Pharmacist.” Those elevated pharmacists can work more closely with patients to monitor diseases and help manage drug side effects and complications.

Herold says SB 493 came about in anticipation of a run on doctors from the Affordable Care Act.

“The whole point in having pharmacists involved in this is to help take care of some of the things that pharmacists are trained to do,” she says, “and to keep the primary care providers focused on the things that they are required and can do themselves.”

If pharmacists can see patients for medication-related requests that would normally require a primary care appointment, this could ease doctors’ patient loads. But this doesn’t mean pharmacists will replace doctors. The goal is for pharmacists to play a more integral role in managing patients alongside other providers.

Jennifer Toy, a professor at the UCSF School of Pharmacy and a pharmacist at Kaweah Delta Medical Center in Visalia, says many hospital-based pharmacists already have protocols that allow them to work in tandem with doctors and other providers.

SB 493 now authorizes pharmacists to furnish some medications without a prescription and work directly with patients to manage their medications. In some settings, pharmacists are already permitted this expanded scope of practice—including Jennifer Toy, a pharmacist at Kaweah Delta Medical Center shown here demonstrating how to use an insulin pen. (Courtesy Matt Heinsen)

Some places poised to benefit most from this law are underserved areas where there’s typically fewer providers, fewer hospitals, and patients with a high burden of chronic disease.

“In areas where the physician shortage is harder hit than some other areas, such as the Central Valley, I think those are going to be probably the places that’re most likely to be positively impacted,” says Stanley Snowden, a pharmacist at Community Regional Medical Center and a professor at California Health Sciences University’s College of Pharmacy in Fresno.

And yet, no matter how promising SB 493 appears to be, pharmacists still can’t get paid for their expanded responsibilities. They can’t bill private insurance plans for them, and can’t get reimbursed by the government.

Another state law passed last year does authorize pharmacists to be reimbursed through Medi-Cal, but it can’t go into effect until the state develops a policy proposal and gets it approved by the federal government. A state representative explained it’s likely their submission won’t be ready until at least mid-2018.

One of those pharmacists works for Brian Komoto, who’s already preparing for taking on pharmacy patients. Eventually, he thinks they’ll have the space to take on two patients at a time in their Delano pharmacy. But only once they can start getting paid for their work.