In February, a huge hole opened in the Lake Oroville main spillway. The cause of the hole is still undetermined. The ensuing closure of the main gates and use of the emergency spillway for the first time ever caused damage to the hillside, erosion toward the spillway structure and thousands of people to evacuate.

The California Department of Water Resources feared catastrophic flooding and chose to once again release water down the main spillway.

State and federal agencies devised a plan to quickly repair or replace the structures at the lake.

Most, but not all, of the repair work is scheduled to end within a month. Here's how crews are working to rebuild the spillways.

A Spillway In Four Parts

Kiewit Construction says by the time construction on the main chute ends this year, a 3,000 ft ramp will connect the gates at the top to the energy diversion blocks at the bottom.

Even though concrete pours will stop Nov. 1 on the main spillway, more concrete will be required next year.

The top 730 feet is the original chute and will remain for one more winter and will then be replaced.

Three new sections below are under construction.

Section three measures 1050 feet and includes the lower of the two significantly-damaged areas. 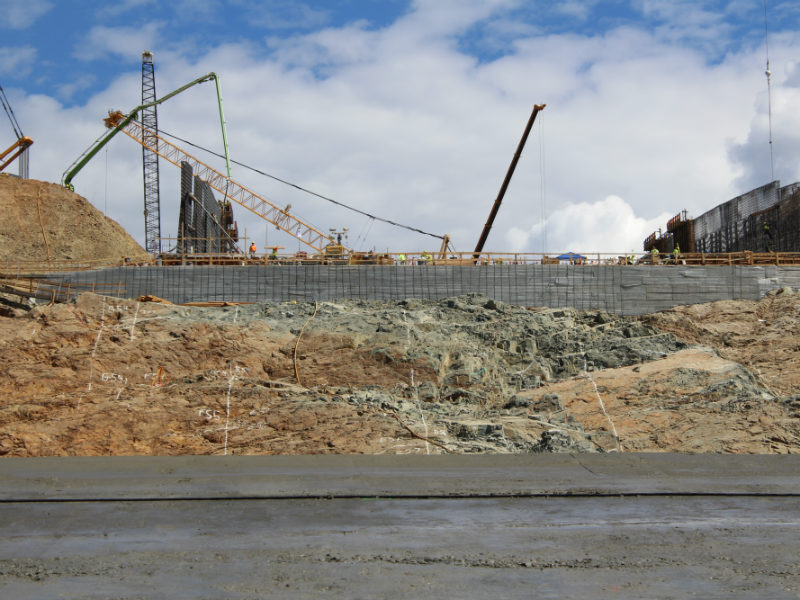 About 500 feet remains between the bottom of section two and the top of section three. Bob Moffitt / Capital Public Radio News.

Section four is 350 feet long and includes the energy diffusion blocks at the bottom. Those blocks will be resurfaced next year.

Although there is a gap of several inches between sections three and four, Jeff Petersen, who is the Oroville Project Leader, says it won't be there when the work is done.

"Anchors connect all that concrete so it's all anchored back down to the rock and the RCC will butt into that and tie in with more anchors. So, it just provides a real solid connection.

But it's a temporary fix.

"It will be a perfectly smooth." he says. "It will be smoother than what you see here because this isn't the final lift."

Section three will be topped with two-and-a half feet of rebar-enforced structural concrete next year.

The gap between sections three and four is nothing compared to the 500 feet of bare rock that is still exposed where the spillway originally gave way in February.

Crews are filling that void at five feet per day.

That's when the concrete trucks started to make round-the-clock deliveries. 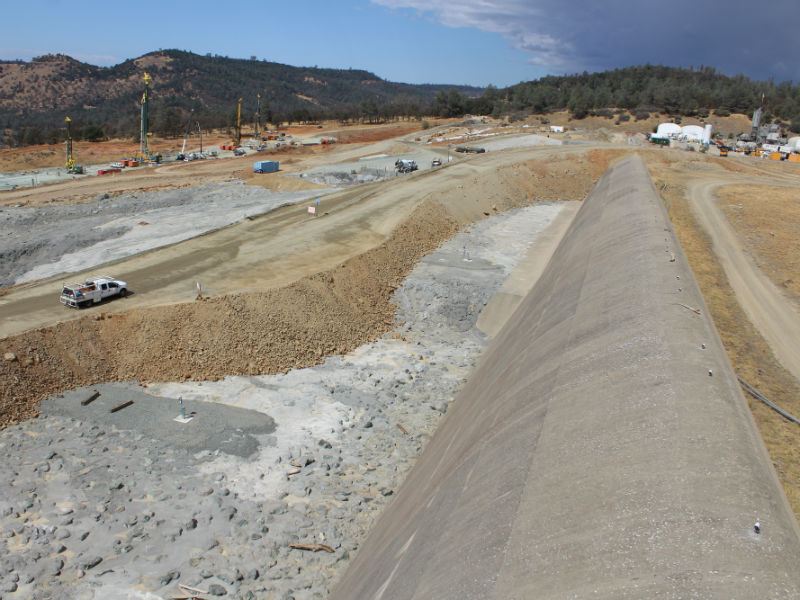 Petersen says that concrete will remain as a temporary splash pad if the emergency spillway is needed again this winter.

"The concrete you see down here was all placed in February during the event and we won't touch that."

They won't touch that...for now. A new landing pad is scheduled for next year.

Like the spillway, it will measure 1,450 feet long. The pad would have berms on each side, 10 feet tall and 15 feet wide, and would direct water to a low-lying area in the rock formation below and then to the diversion pool below that.

First, crews must drill 75 feet down into solid rock to create the forms for a cutoff wall.

Petersen says crews must create forms for the wall, "The starter wall is cast concrete and you can see the round indentations in it. That provides a guide, like a drill-bit guide for the three-foot-diameter drill to get in the right locations and the right alignment."

The cutoff wall could be complete by late December or early January. 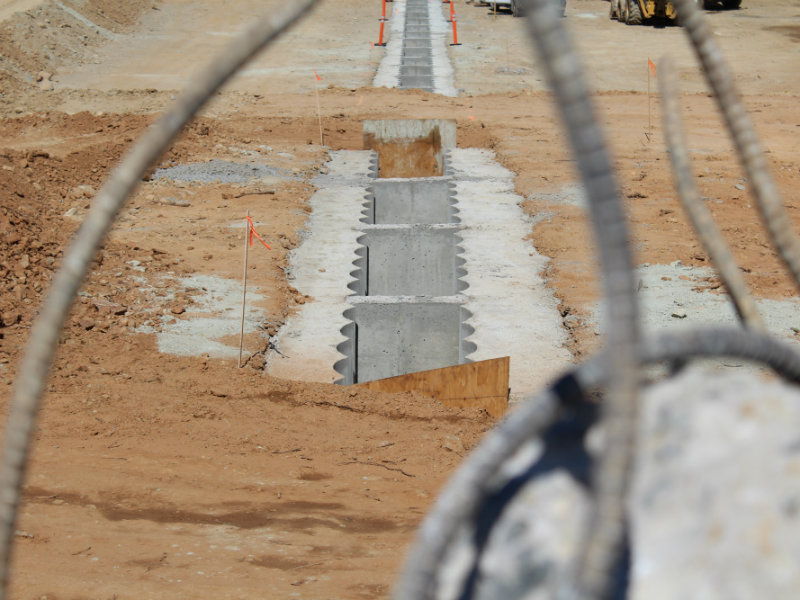 There are no plans to build a complete concrete emergency chute similar to the main spillway.

The old Lake Oroville main spillway and the new spillway both have the same enemy: water.

For every 30 feet of the new surface, there is a 6" drainage pipe four-to-13 feet below the surface. Petersen says new technology should prevent any water from getting through the concrete from the top.

"It flows from the middle out, the water does. If water went down through the slab, it would collect it. That's not likely because a new technology in this construction is the water-stop joint and you can see it in this white vinyl. That water stop is at every joint. So, water can't really get down there." 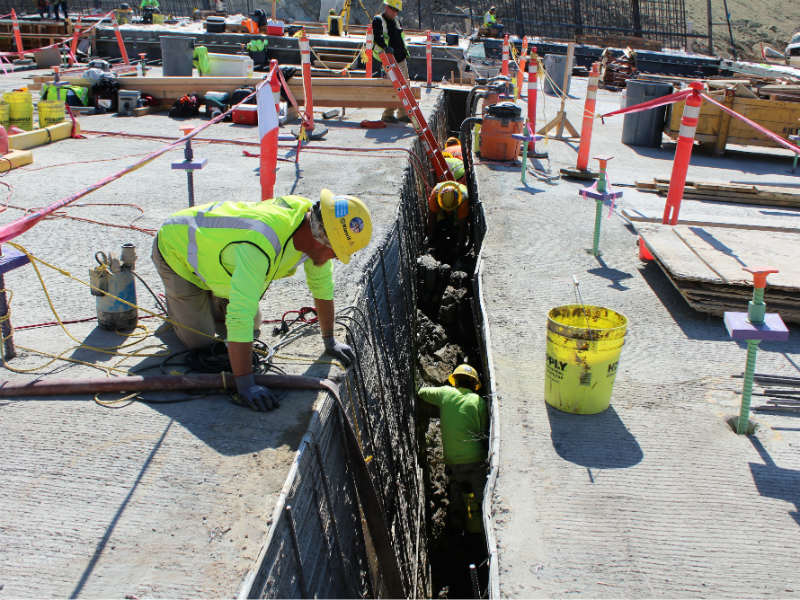 That's not to say water absolutely won't make it to the drains.

"Over time," Petersen says, "a slab separates or cracks or whatever happens to the concrete in the years ahead, the drainage system collects the water that goes through."

The new pipe is durable plastic and the California Department of Water Resources says there are more of them than were under the old spillway.

The pipe under the old spillway was made of clay.

When groundwater pushes its way up through cracks in the rock, Petersen says the drainage system can handle that too.

"The drainage system connects to the rock and the slab. So it would collect water coming up also, gets in the pipe, and goes back out to the sides, then those sides follow the chute walls and the water comes back into the chute." 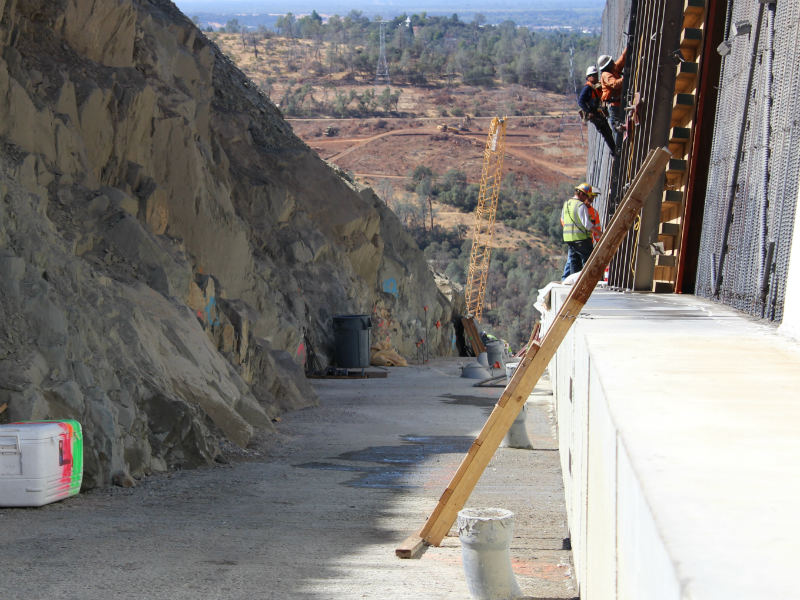 The white pipes coming out of the drainage system will connect with pipes that will feed the water into the main spillway.  Bob Moffitt / Capital Public Radio

Fifty six piezometers are being placed all around the site at places selected by engineers to monitor water pressure under the concrete.

All told, there are about three miles of pipe under the spillway.

Kiewit Construction is erecting 3,000 feet of walls on each side of the Lake Oroville main spillway.

The sections of walls are in various stages of completion. Some are finished. Others are wooden frames covered by wire mesh.

Petersen says the interior wall is a roller-compacted concrete that is finished with a type of concrete called shotcrete. 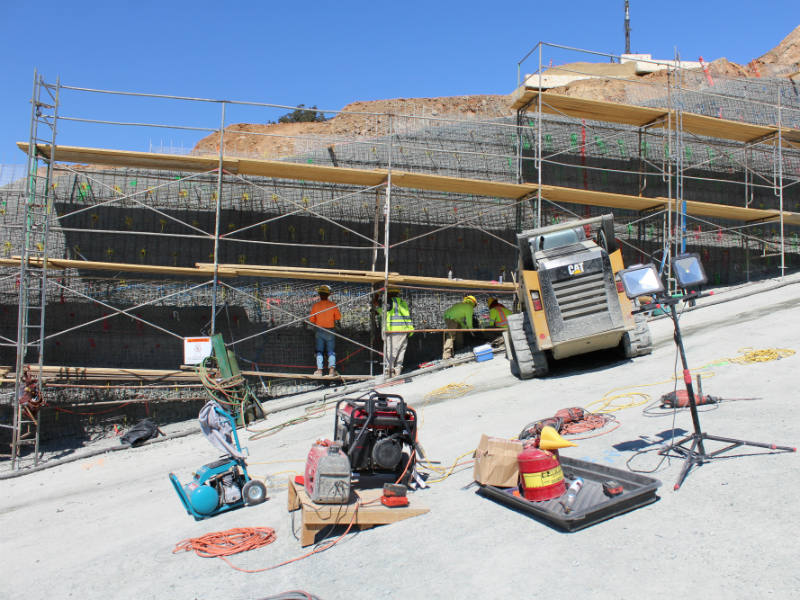 Crews work on a slope of 4:1. They must erect scaffolding and a frame of wire and wood for the walls at the Oroville main spillway.  Bob Moffitt / Capital Public Radio News

"High air pressure blows it onto the wall. It's very similar to a swimming pool construction," he says."Then they just use a trowel finish with good piano wire guides to get the concrete to the smooth finish they want

He says the walls must allow water to flow with minimal resistance.

"This has to be what they call the high velocity concrete finish, so smoothness is very important. They don't want any turbulence on the water to cause extra erosion."

The California Department of Water Resources says the walls must be able to withstand 100,000 cfs traveling 78 mph. 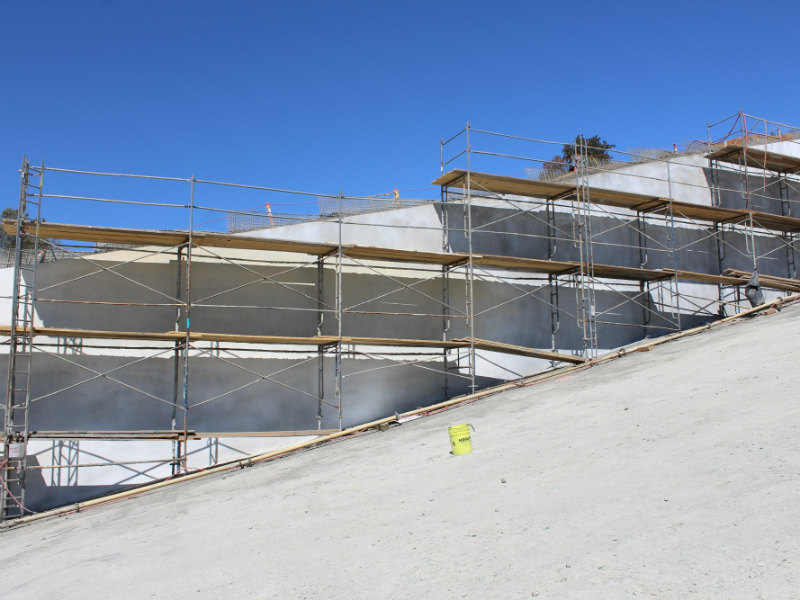 It's may appear rough, but this wall of finished shotcrete is smooth to the touch. Bob Moffitt / Capital Public Radio

Permanent walls that use rebar-enforced structural concrete take six months to build and the middle section of the spillway was only recently cleared to begin construction. That would have put wall construction into next April, well into the rainy season.

DWR says it has used the main spillway 26 times in the past 48 years.

Crews in the mid 1960's were not using liquid nitrogen to make structural concrete for the Lake Oroville main spillway. But workers replacing the damaged spillway are.

Petersen says this is not your grandfather's concrete.

"This concrete with the chemicals we have now is actually called erosion-resistant concrete. And so, it holds up a lot better to erosion over time and this is the concrete that has the extreme temperature control. So, at the batch plant, we make it with ice. We cool it off with liquid nitrogen and then we bring it out here. It has to be 50 degrees on the grade." 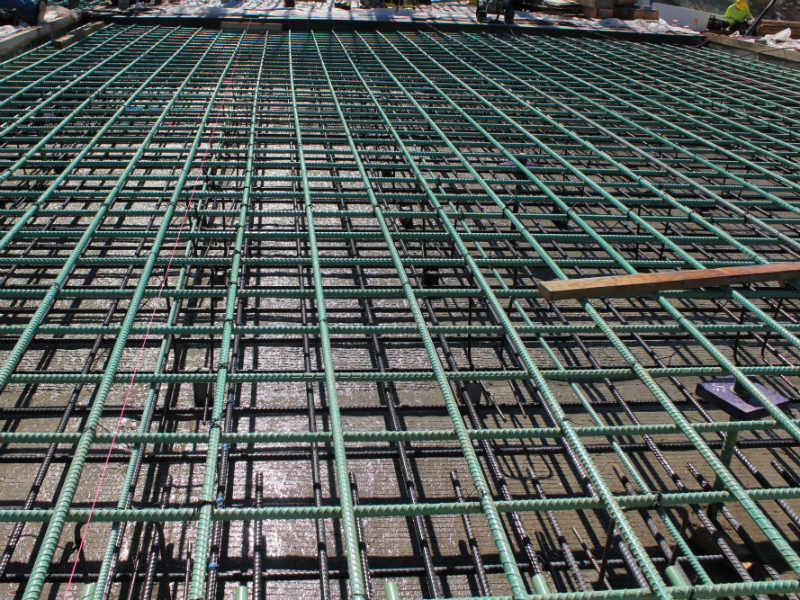 One section of the new spillway consists of a different type of concrete that allows heavy machinery to work on it immediately. A vibratory single-drum compaction roller helps jiggle it into a solid.

"It's not that liquid. Roller compacted concrete isn't liquid like you're used to seeing concrete come out of a concrete truck. It's damp. It really just looks like wet base rock. But, the fill feels like you're walking on Jell-O until it cures."

One other change compared to fifty years ago is how the concrete is poured.

Roller compacted concrete has no score lines or sections until the top ten feet.

And the erosion resistant structural concrete is poured in thirty-foot-wide squares parallel to the sides of the spillway. The original spillway was poured in a herringbone pattern.

DWR estimates the cost of the spillway projects at $275 million. The total recovery effort is estimated to cost about $500 million.