Jeff Hall is an inmate at California State Prison, Solano, in Vacaville. He was sentenced to life without parole for a murder he committed in Santa Clara when he was 18. 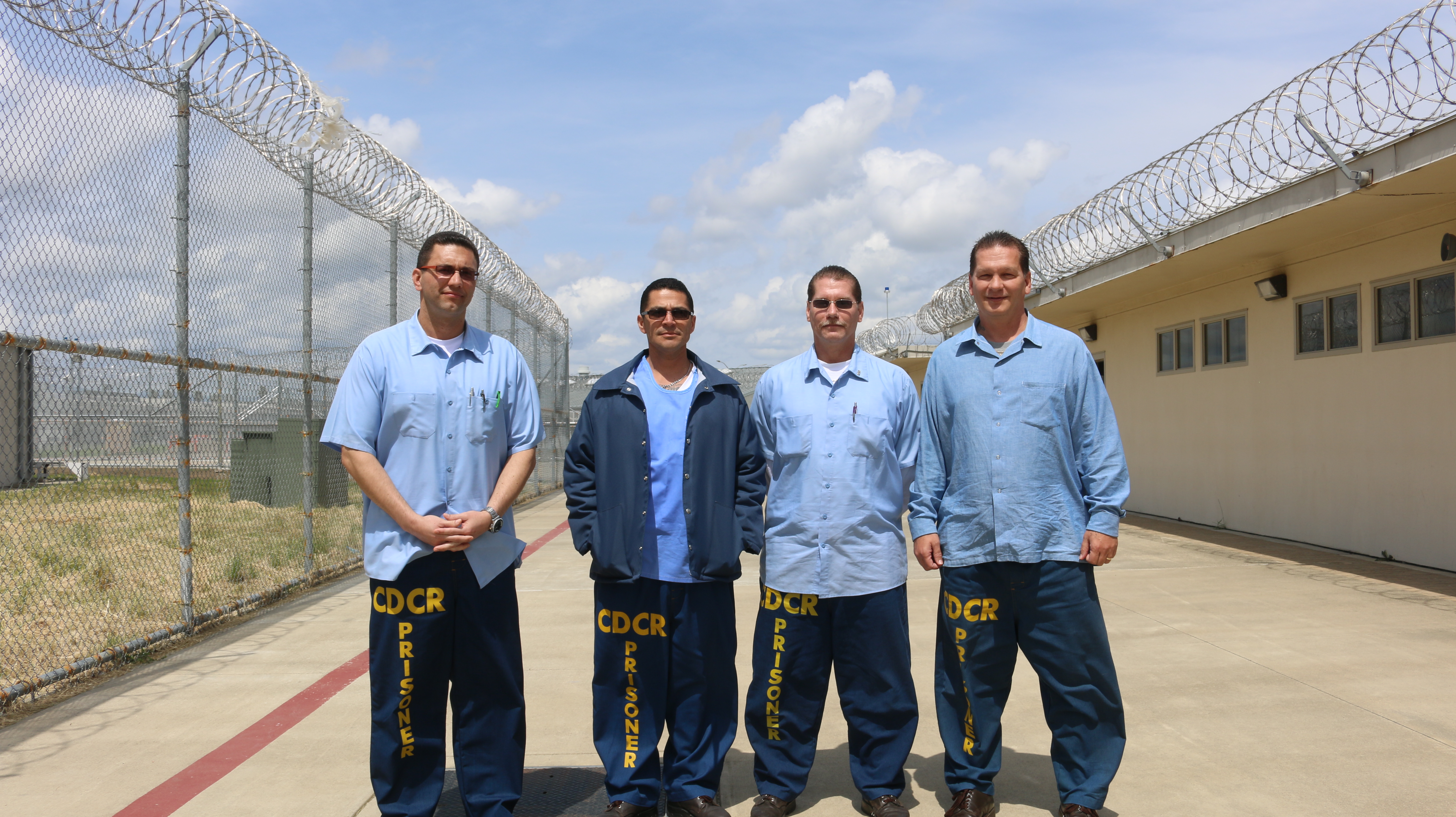 Inmates on the Level II side of Solano State Prison. From left to right: Daniel Hopper, Carlos Leon, and brothers Lance and John Badgett. They all were sentenced to life with the possibility of parole. (Sally Schilling / Capital Public Radio)

Now, the California Department of Corrections, or CDCR, is trying out a new rule that says life-without-parole inmates like Hall can move down one more level, if they have a record of good behavior and pass a review. And for inmates sentenced to life with the possibility of parole, they can move down to Level I, if the facility has a secured perimeter. 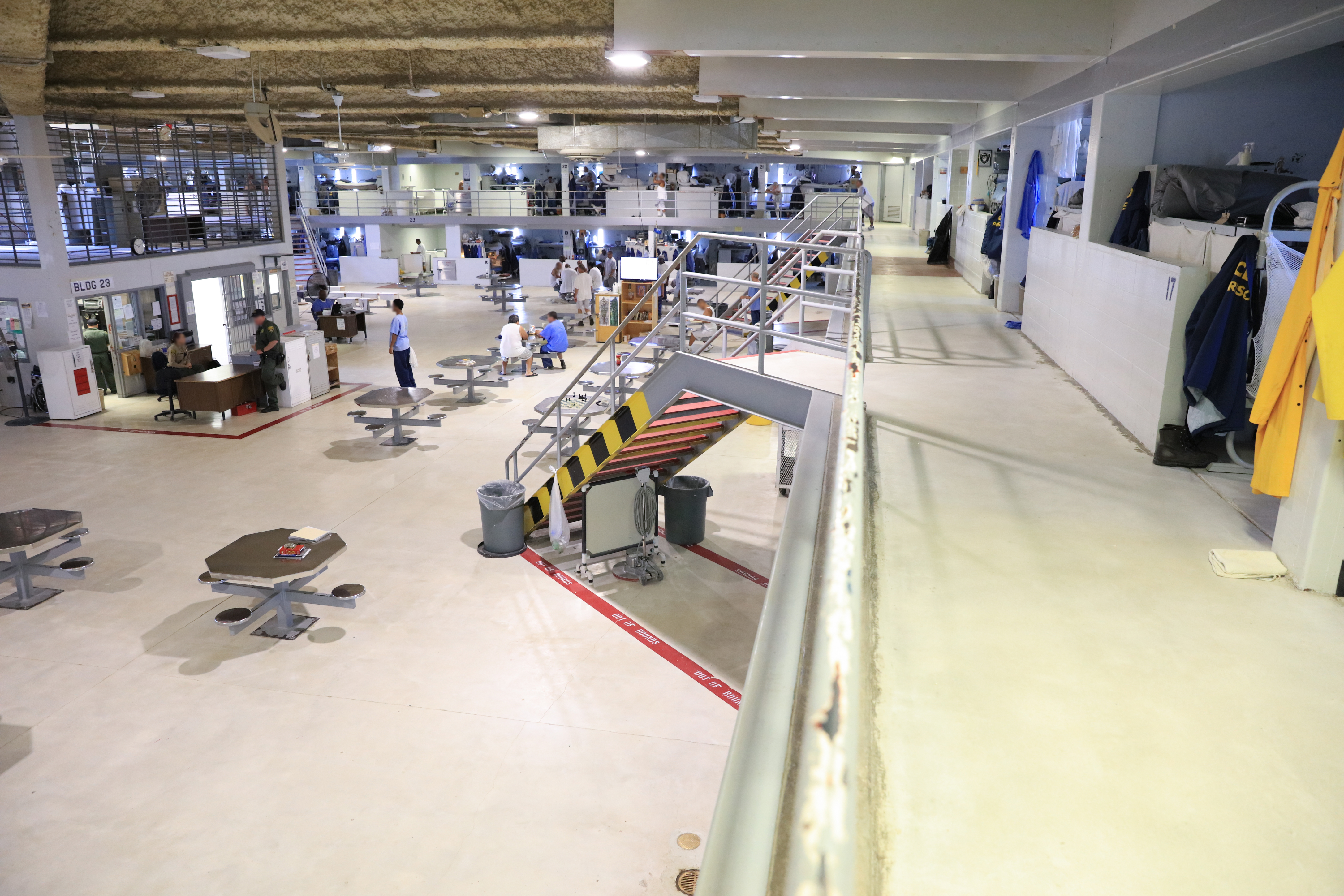 Lieutenant John Ojo says California State Prison, Solano, in Vacaville, has levels II and III, and the difference is “night and day.”

The living arrangements differ, and so do the social norms. 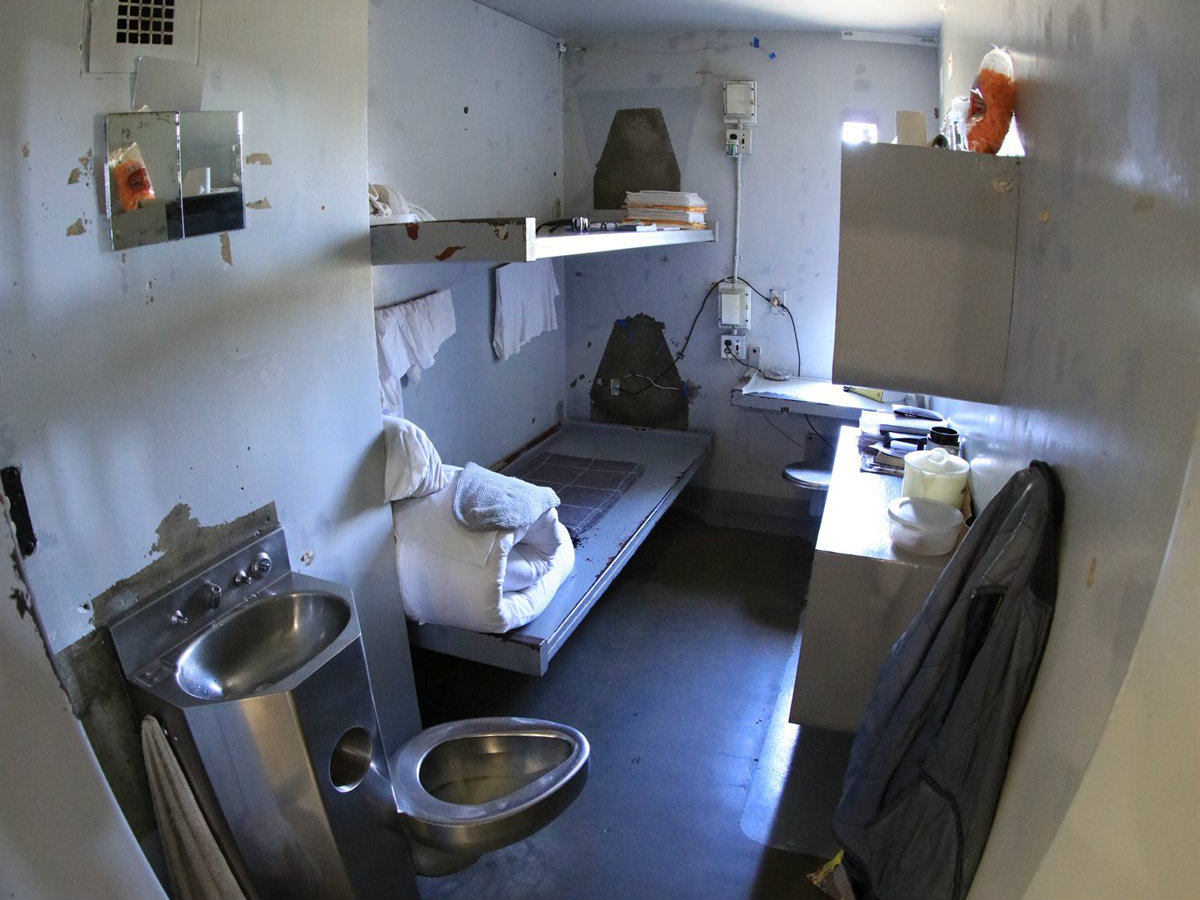 Daniel Hopper, a Latino inmate at CSP Solano, remembers when he moved to a Level III.

He came from a Level IV prison where you couldn't use a drinking fountain at the same time as an inmate of another race.

“First day there on the yard I’m drinking water and a black guy comes up next to me and starts drinking water,” Hopper recalls. “And I remember pulling back.”

Some other inmates were standing behind him.

“I was like, ‘Are you sure? You ain’t gonna get me stabbed?,” he laughed, remembering the culture shock.

Last year, California had more than 34,000 inmates who have life with parole and about 5,000 without parole.

According to the Sentencing Project, California is just about tied with Utah for the highest percentage of prisoners with life sentences, about 30 percent of the population. 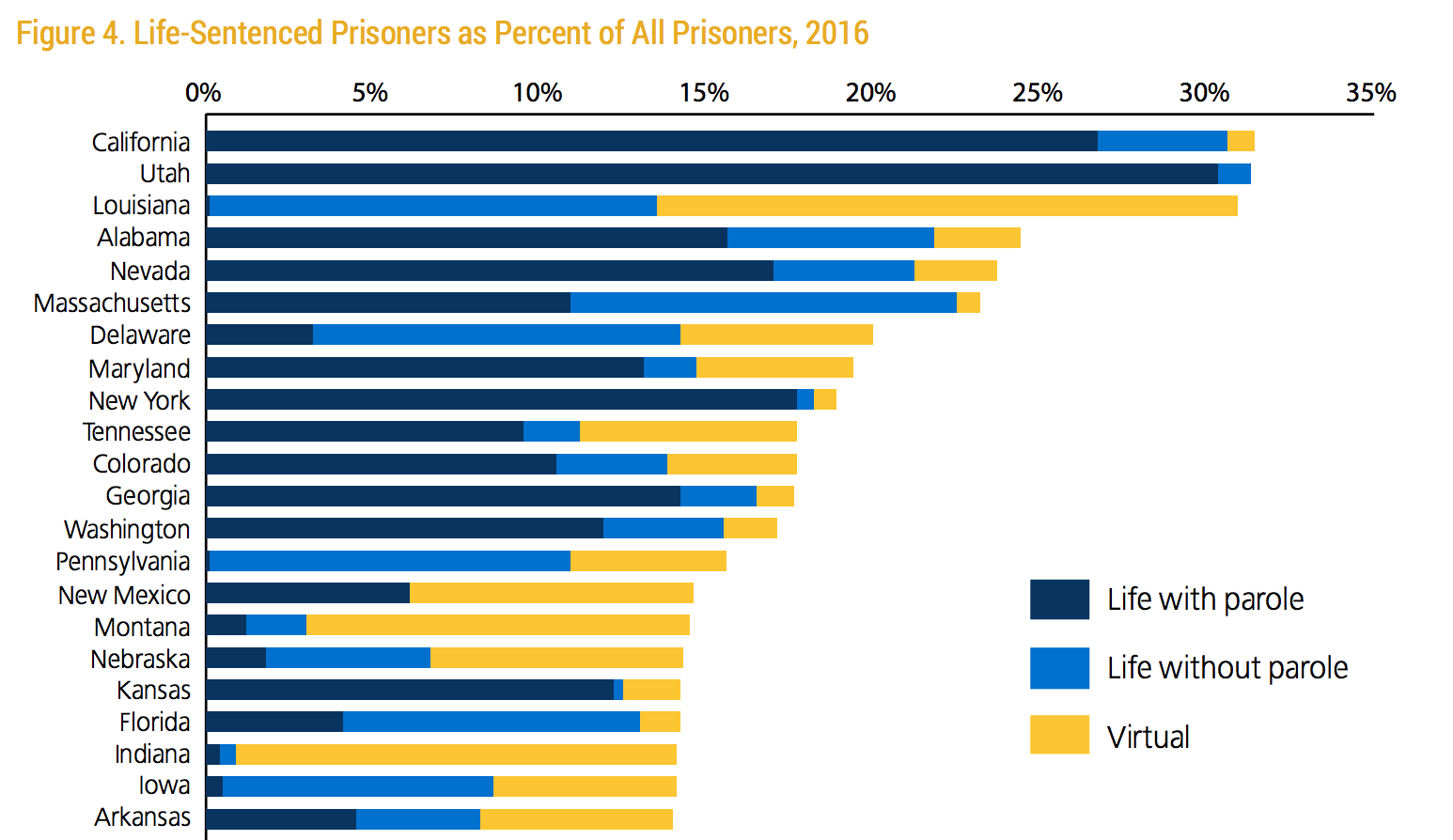 Proportion of states' inmate populations that are serving life sentences, with or without parole, or virtual life sentences, longer terms that inmates will not outlive. (Credit: The Sentencing Project)

In 2010, CDCR commissioned a group of University of California researchers to review its inmate classification system. The group found that the system “appears to trap well-behaving inmates in higher housing levels.” They also found that these inmates had more behavior problems when housed at higher security levels.

Krissi Khokhobashvili, a public information officer for CDCR, says the department has an obligation to house inmates in the lowest level possible while maintaining safety.

California’s prisons used to be too overcrowded to attain this goal, Khokhobashvili says, but after prison realignment, and changes in sentencing laws, the department is now able to work on it.

“Our population has changed and we no longer have those inmates who are serving really short sentences, so we need to make those opportunities available for people who have the longer sentences,” she says.

Nina Salarno with Crime Victims United says the department needs to be more thoughtful in dealing with these high-level offenders, who can pose safety risks to other inmates and officers.

“There’s mostly concerns for the officers inside,” Salarno says. “There’s a high rate of assault that goes on in prisons and now you’re taking people, especially those with life without possibility of parole, they really have nothing to lose.” 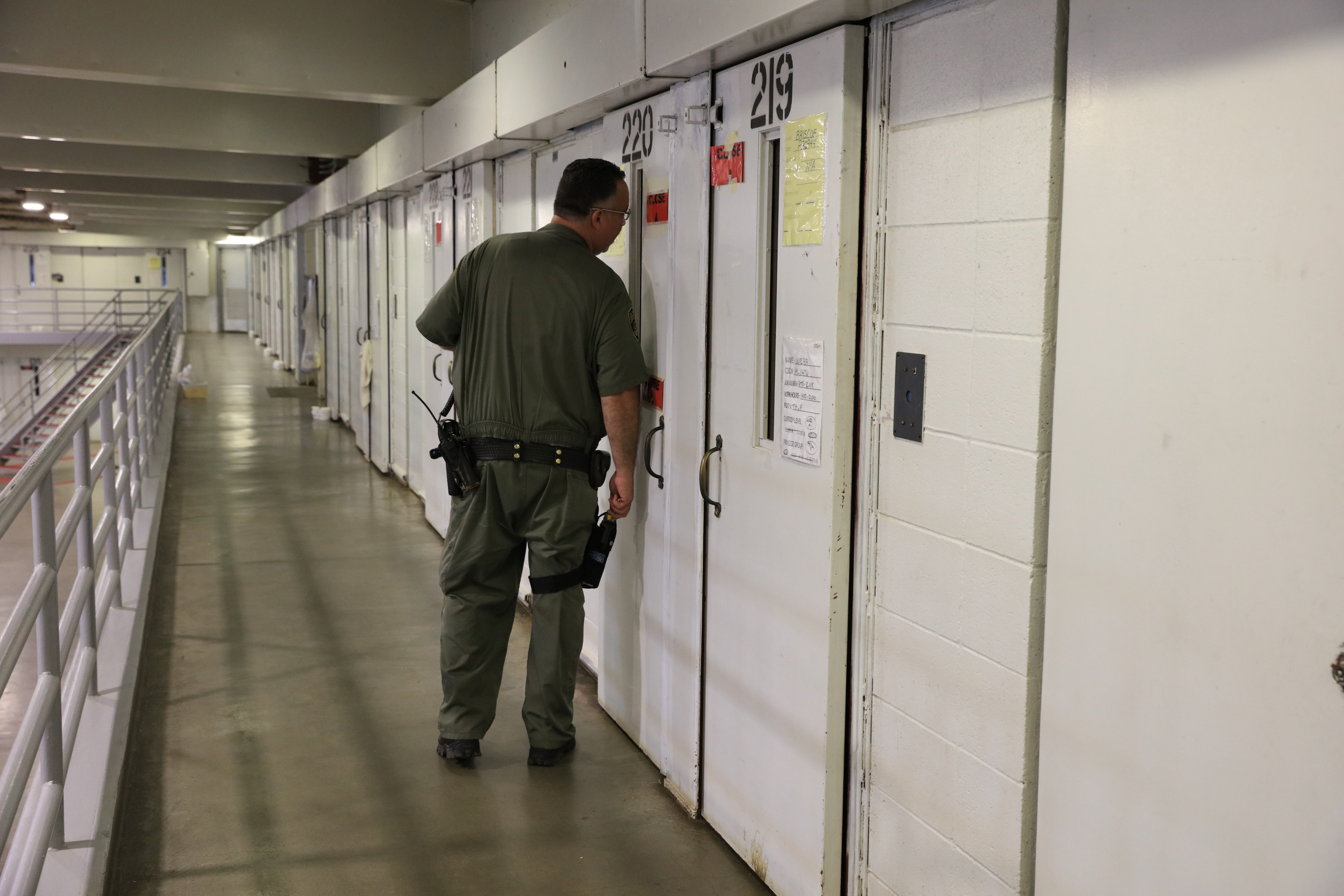 CapRadio contacted the California Correctional Peace Officers Association several times for comment on this story, but did not get a response.

When CapRadio spoke with inmate Hall in May, he was leading a program called “Man Up,” a support group that helps other inmates with character building and anger management.

He had just been granted a transfer to a Level II prison and was waiting for paperwork to be processed.

“All these years that I’ve spent working very, very hard to follow the rules and not get involved in all the nonsense of prison, I find it as a little reward,” Hall says.

He said he was looking forward to the change in lifestyle.

“The violence, the racial separation, all that stuff that persists on a Level III and a Level IV it’s really not who I am,” he says. “Prison has put me in a box I don’t want to be in. They’re recognizing that just because a person has life without the possibility of parole doesn’t necessarily mean I’m the same person I was when I was 18 to the person I am now where I’m 43.”

The new rule is currently being reviewed and will either be finalized or disapproved by the Office of Administrative Law later this month.