States And Cities Are Fighting Climate Change, With Or Without Nations

He drew a cheer when he mentioned NASA satellites that track global temperatures.
“If Trump turns off the satellites, California will launch its own damn satellite. We’re going to collect that data,” Brown said.
It’s not an empty threat.
California has long had its own array of ambitious climate change policies. In addition, the state is also one of hundreds of regional and local governments around the world who are collaborating in both formal and informal alliances to reduce greenhouse gas emissions. Scientists who study climate change say their efforts could match or exceed those of nations. 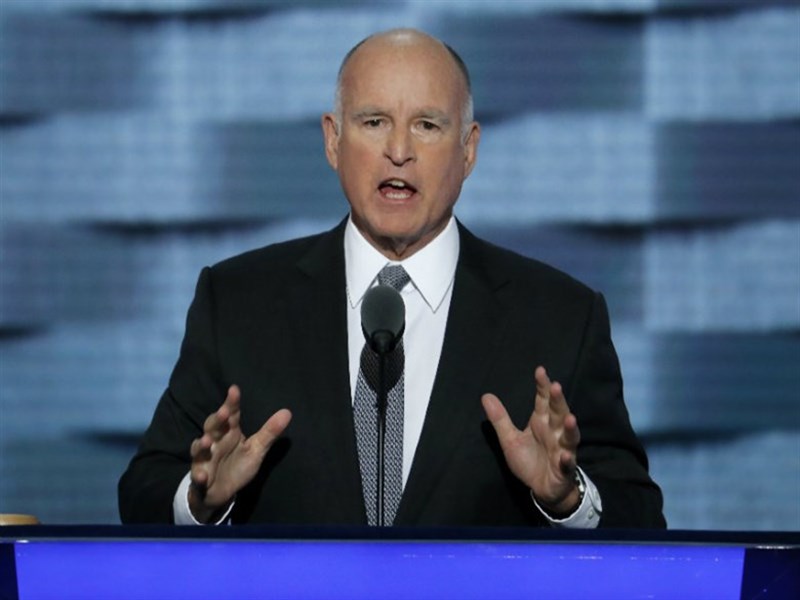 California Gov. Jerry Brown speaks during the third day of the Democratic National Convention in Philadelphia , Wednesday, July 27, 2016. (AP Photo/J. Scott Applewhite)
As national governments discussed a new United Nations climate change agreement two years ago, Brown was meeting with regional leaders at the same events. Months before the Paris Agreement, California and the German state Baden-Württemberg announced their own pact: The two regional governments would lead sub-national efforts to keep global warming below two degrees Celsius (a somewhat arbitrary temperature limit, which governments and climate scientists have generally targeted to prevent the worst effects of climate change).
“Looking around and seeing the Republican Party almost unanimous in its denial of the science and its refusal to taking even minimal steps to combat climate change,” Brown told Capital Public Radio in a recent interview, “Then we have to join with the willing, a coalition of the willing.”
Today, the Under2 Coalition counts more than 150 local and regional governments as members, including huge cities like Beijing and small, rural, developing counties like Laikipia, Kenya.
MILLIONS OF TREES
Laikipia Governor Richard Irungu bends down to water a knee-high sapling, newly-planted. A group of women who work on conservation sing in a local dialect behind him. It’s the launch of a major tree-planting initiative in the county; the goal is to install millions of new trees over the next five years.
As in most developing countries, emissions in Laikipia are expected to spike with population growth, as new residents clear more land for farms and cattle, and burn more wood and coal for fuel. Irungu says it’s difficult to tell poor farmers not to take those actions to improve their quality of life. 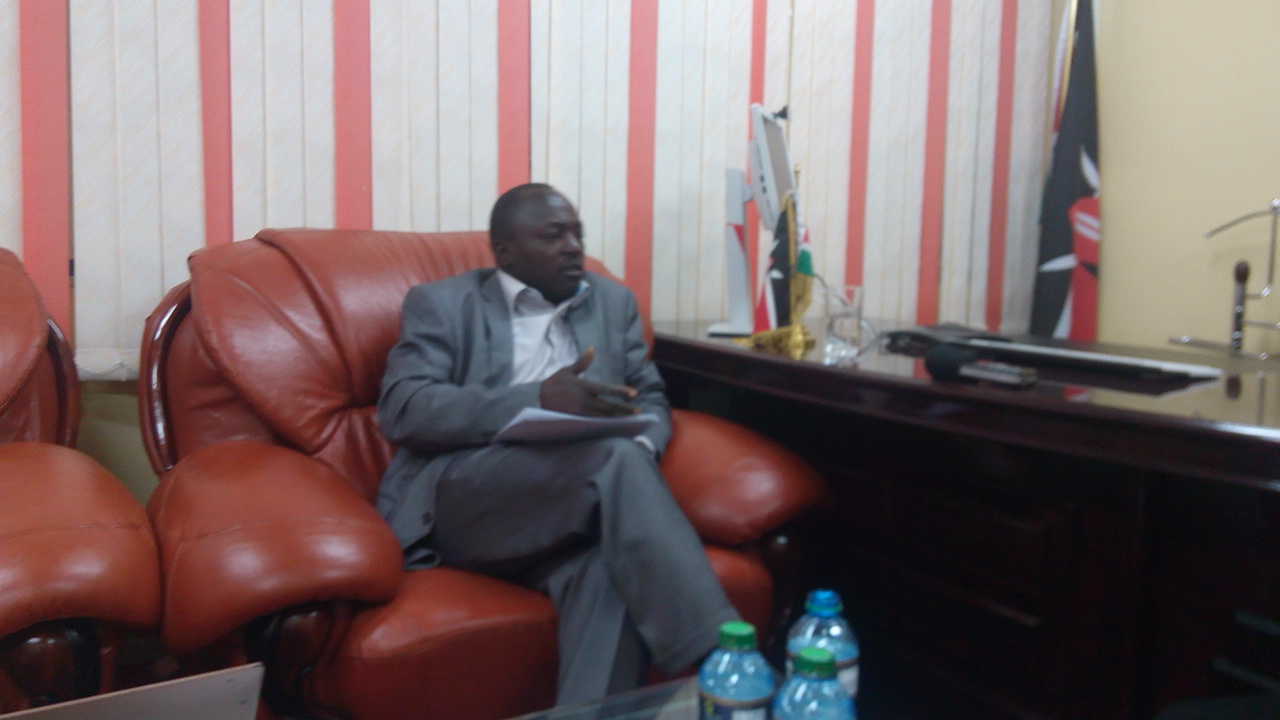 Laikipia Governor Richard Irungu. (Muchiri Gitonga / Courtesy)
“We are having all of these problems even convincing our farmers that there is a challenge of climate change,” Irungu says. But at the moment now people have started realizing that a change has come.”
Irungu hopes the tree-planting, which includes giving farmers new, high-value fruit trees, will help offset increasing emissions. And, the county has included the initiative as part of its plans to limit emissions, as a member of the Under2 Coalition.
In turn, California has helped the county take inventory of its emissions, a method of calculation the state hopes other, similar regions can also adopt.
A CONGLOMERATION OF ALLIANCES
Members of the coalition agree to share information about their climate change actions—what has worked and what hasn’t, and how regions have implemented new energy efficiency standards, building codes and clean transportation.
Other similar alliances to Under2 include Europe’s decade-old Covenant of Mayors; the Compact of Mayors, founded by then-New York Mayor Michael Bloomberg; the States and Regions Alliance; and the Carbon Neutral Cities Alliance, to name just a few.
“One of the largest attractions is that you can have mayors or governors come together and share what they’re doing,” says Angel Hsu, a Yale University scientist who studies sub-national climate change actions.
The Netherlands is helping San Francisco develop more energy-efficient buildings, while New York City credits Bogotá, Colombia for advice on installing charging stations for electric vehicles. California is consulting with nations, Mexico and China, as they set up their own cap-and-trade systems.
The U.N. lists more than 2,500 cities and 200 regions around the world that have committed to reduce greenhouse gas emissions.
“It’s major cities that are acting,” Hsu says. “If we sum up all of that activity, we’re talking about a significant portion of the global population.”
A couple years ago, Hsu studied pledges to act against global warming that states, cities and regions made at the New York Climate Summit, convened by then-U.N. Secretary Ban Ki-Moon.
She found their concrete commitments to reduce emissions could equal India’s total annual output and rival what nations pledged in the Paris Agreement. But, Hsu says the data also revealed a major problem.
BEDEVILED
“The devil is always in the details,” she says. “Whether they will actually be able to follow through on their plans and report back transparently to the public and to their citizens what they’ve been able to achieve and what their challenges are.”
Only five of 29 commitments had teeth, Hsu says. Most governments haven’t laid out how they’ll meet their goals—whether they’re practical or just aspirational—nor do they publicly share their emissions and reductions, as they occur.
For instance, Laikipia has committed to foregoing coal in favor of solar and wind energy, but Governor Irungu says it will need help.
“The initial capital is huge to our farmers, and, therefore, if we can also get technology support and we get financial support, we as a county can remain committed to reduce carbon emissions,” Irungu says.
Irungu is looking to Under2, but Ken Alex, who oversees the organization for Jerry Brown, says the organization has little, if any, stable funding.
“We’re learning, we’re building the airplane as we’re flying it,” Alex says. He notes the organization has more signatories than the Paris Agreement. “And oh by the way there are at least 10 languages.”
He counts one full-time employee working on it. Instead, Under2 has largely relied on informal arrangements.
For instance, a U.C. Berkeley professor who does work in Kenya helped Laikipia calculate its total emissions. Another class at Berkeley law school, made up of international students with law degrees in their home countries and taught by a former colleague of Alex’s, is scouting potential new allies.
Local governments have typically adopted climate change policies more quickly than countries, and the thought is if enough regions band together, they can push nations to act. Conversely, without a critical mass, Governor Brown says places that have commitments will waver.
“California can’t be an island,” Brown says. “If we keep imposing regulations and taxes and climate change strategies that create a competitive disadvantage, then we won’t sustain it, we will give up at some point. So we need allies. We need a world that is consistent with where California is going.”
These alliances could play a key role in creating that world, but Under2 is under two years old. With the clock ticking to curb emissions, it still has a lot to figure out, and quickly.
Follow us for more stories like this