UPDATE 8:15 p.m.: According to the Sacramento Municipal Utility District, just under 3,000 people were still without electricity Friday evening after storms knocked out power to more than 74,000 people earlier in the day.

Storms caused problems throughout California Friday, from power outages to flooding and travel delays. The National Weather Service predicted Friday morning that weather would ease Saturday, though river levels in the Sacramento area could continue to rise, threatening localized flooding.

The wettest storm of the system is expected to arrive Monday and Tuesday to the Sacramento region, bringing heavy rain and snow along the passes, as well as more high winds.

The National Weather Service says gusts are expected up to 55 miles an hour throughout the greater Sacramento region.

Earlier Friday, more than 74,000 SMUD customers were without power. Those numbers are now down to about 3,500 customers, according to SMUD.

At last check, 42 flights here in Sacramento have been canceled today and the airport recommends checking with your carrier for any updates.

In Southern California, a mudslide has shut down northbound Highway 101 near Ventura.

Also, a rockslide temporarily stopped traffic on I-5 going over the Grapevine into Los Angeles.

UPDATE 2:55 p.m.: 74,000 customers are without power in the Sacramento region Friday afternoon, according to SMUD.

SMUD did not immediately disclose when affected grids would be back online. 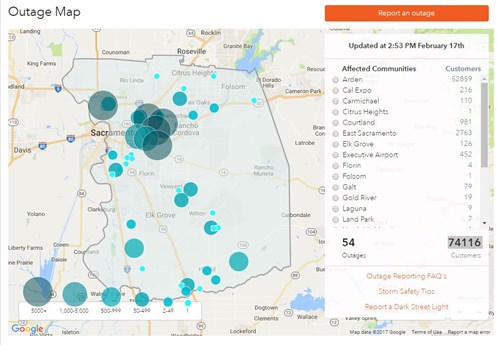 UPDATE: 2:46 p.m.: Another foot of snow is expected Saturday in the Sierra Nevada, where crews spent much of the last week clearing mudslides and rock slides that had closed state highways around Lake Tahoe during the last in a series of record-breaking winter storms.

The National Weather Service in Reno issued a winter weather advisory Friday through 10 a.m. Saturday throughout the region north and south of Tahoe.

A stronger storm is expected late Sunday into Monday when the weather service predicts a mix of "very heavy snow" and rain over the top of the Sierra along Interstate 80, and potentially "torrential rain" in Truckee, California.

Tahoe-area ski resorts have piled up dozens of feet of snow since Jan. 1. The Mt. Rose ski resort southwest of Reno already has broken the resort's season record with 47 feet.

Rain and wind wiped out play Friday in golf's Genesis Open at Riviera Country Club in Los Angeles, where a eucalyptus tree cracked beyond the 14th tee.

The Los Angeles Fire Department says another tree brought down power lines as it fell on a car, and a person was hospitalized for possible electric shock.

Another tree smashed a carport and vehicles in the Santa Barbara suburb of Goleta.

The Knott's Berry Farm amusement park in Orange County closed due to the weather.

Original post: (AP) - A powerful storm is beginning to move into California as the saturated state faces a new round of wet weather that could trigger flooding and debris flows.

The brunt of the storm is expected to affect Southern California starting around midday Friday and into Saturday.

The foothill city of Duarte east of Los Angeles has ordered a precautionary evacuation of some homes, and the Santa Anita race track has canceled horse racing for the day.

Forecasters say rain will also spread into Central California and up to the San Francisco Bay Area.

The far northern end of the state will not see significant precipitation from the storm, however.

The National Weather Service says only scattered light showers are occurring in the region north of Sacramento, where the damaged Oroville Dam continues to release water in advance of new storms.

With a look at this morning's models, we've increased the wind gust potential for Sacramento, Delta & down thru Modesto. #cawx pic.twitter.com/8FN9D3ARaL

Some very heavy rain over the next few days in S. CA. Possible flooding / flash flooding, strong winds, and mountain snow, too. Be safe!! pic.twitter.com/dzQSCVRIM2