Water in Sierra Snowpack At 173 Percent Of Normal

The February Sierra snowpack survey has scientists with the California Department of Water Resources optimistic about the state's water supply.

The manual reading at Phillips station near Echo Summit on Highway 50 shows the water content of the current pack is at 153 percent of the long-term normal.

"We are just so excited to see we've got a big snowpack and how that's going to fit in with the measurements we've been making for the past four years," says Frank Gehrke, the state's chief snow surveyor. "I mean, this is some of the best snow you can have and we're looking forward to more of it, of course." 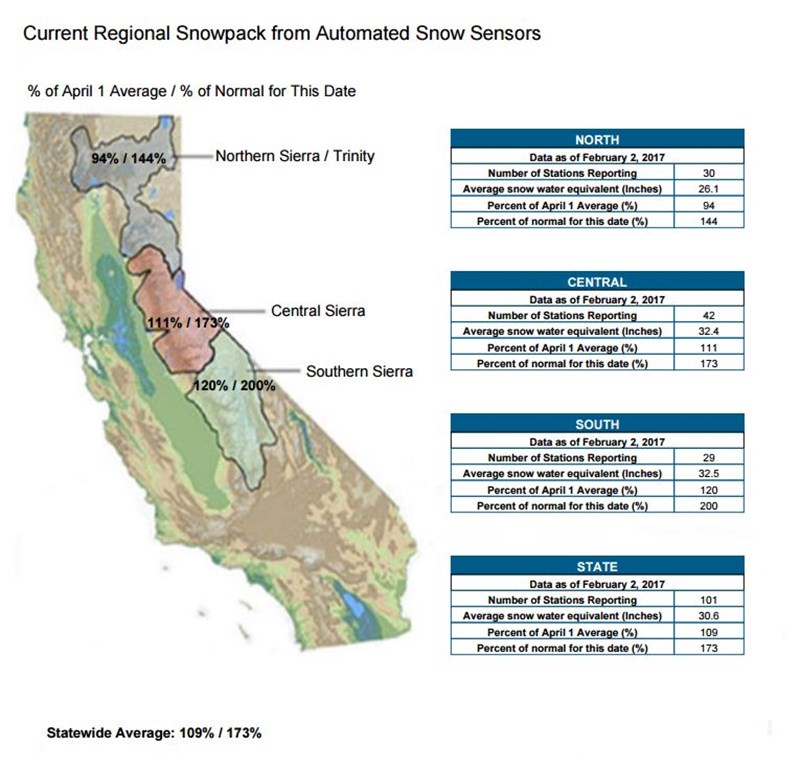 Those readings could also be good news for farmers who are worried about this year's water supply.

California relies heavily on Sierra runoff to feed the state's reservoirs into the summer months.

February is when the US Bureau of Reclamation makes its initial allocation - deciding how much water farmers will get from the federal Central Valley Project.

"Certainly we're optimistic that it could be a significantly better initial allocation than what we've seen in the last few years," says Mike Wade with the California Farm Water Coalition.

Wade also says 2017 might end up being remembered as a missed opportunity, for failing to invest in water storage projects.

"We've got another wet year now where we've got great opportunities to store water and keep it available for the coming years if they're dry and yet we don't have the storage needed to meet California's future," says Wade.

Frank Gehrke warned that the potential of the current snowpack to improve water supply could be diminished if cold and wet storms don't arrive through February and March.

Governor Jerry Brown's administration says it will wait until an April snow survey to decide whether to end the state's drought emergency.