Facebook is getting credit for a surge in voter registration activity among Californians this week.

On Monday, May 16, Californians who logged into their Facebook accounts received a reminder to register or to update their registration information through a link in their news feed. Nearly 200,000 completed transactions (first-time registrants and registration updates) were recorded on the Secretary of State's Office website on May 16 and the following day, May 17.

In a statement, Secretary of State Alex Padilla said the registration activity was the second highest in the nearly four-year history of the state’s online voter registration website.

“It shows the power of social media to spread the word,” says Sam Mahood, a spokesman with the Secretary of State’s Office.

Officials also highlighted one statistic -- 63 percent of those registration transactions were from Californians who are under 35 years old.

"It's long been shown that young people have the hardest time getting the vote out and they also have the lowest registration,” he says. “It's critical that young people are registering ahead of time and that they're actively engaged and participating."

It’s unclear whether the high registration activity will actually translate to higher voter turnout at the polls. But Mahood says registration is the first step to casting a ballot.

"Once you're registered, you're more likely to get outreach materials from the campaigns, you receive our sample ballot, our voter guide,” he says. “It's a very important first step." 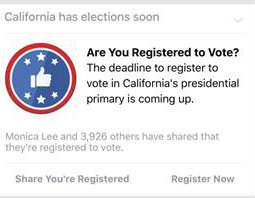 Facebook ran the registration reminder on May 16, one week before May 23, the deadline to register for California’s June 7 primary. Facebook officials say the reminder went out to Facebook users who will be 18 or older on election day.

This is the first year that Facebook released the the registration reminder feature. In the past, the company has done Election Day reminders, where users can get polling information location and show their friends that they have voted.

Alec Gerlach, a spokesman for Facebook, says the company came up with the registration reminder feature because politics and the 2016 Election was the most talked about topic on the website last year. This year looks to be keeping pace, he says.

“People are engaged, and we’re being responsive to how people are using Facebook,” Gerlach says. “We're able to do that and wanted to have an impact.”

Mindy Romero with the California Civic Engagement Project at UC Davis called the week’s number encouraging because it could potentially impact turnout especially among younger people.

"People who register close to an election tend to have a higher [voter turnout] rate, because they're registering specifically for that election or someone outreached to them," she says.

But Romero says while this week’s numbers are notable because of the sheer volume in just two days, California has actually been seeing an overall increase in online voter registration activity since January.

In the first four months of 2016, about 850,000 transactions occurred, something that has not happened since the system was implemented in 2012.

“What's been interesting is that it's been so early,” Romero says.

She says this year’s unique election cycle, with media coverage starting since last year and interesting politicians involved, combined with the convenience of the website has resulted in the overall increase.

For California’s June 7 primary election, registration and any updates to your voter registration information must be postmarked or submitted electronically by Monday, May 23.

Drew Sandsor contributed to this report.