UPDATE: 4:57 p.m.  There have been a dozen fires along the American River in Sacramento the last three weeks. Monday's fire presented some unique challenges.

The long reach of a Sacramento Fire Department water cannon kept the damage to about an acre. But, the water soaked the trees until the limbs could no longer bear the weight.

"Limbs started falling," he says. "It's very scary. You hear the cracking noise. The captains that are back there working the crews basically alerted everybody and everyone backed up." 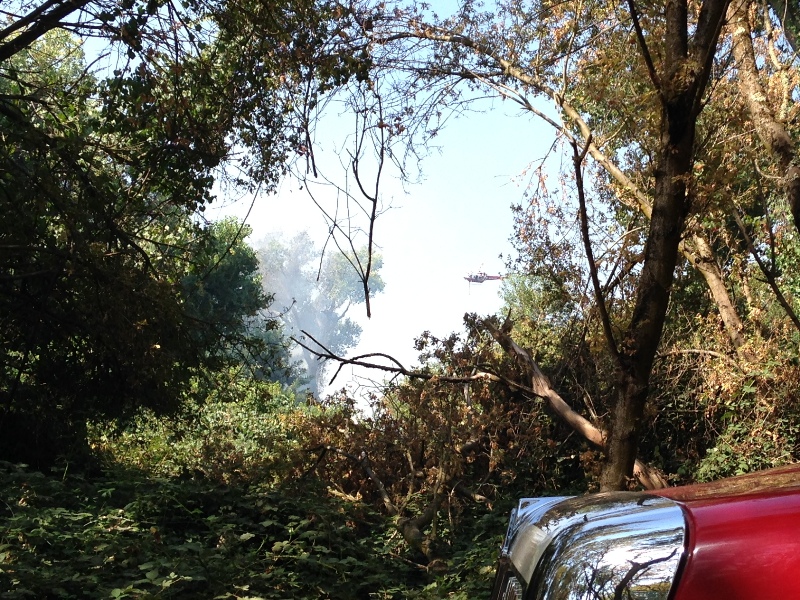 "After we backed up, we saw two more deadly-sized," he says. "I mean, these are not small branches. These are two and three feet across. The whole tops of trees falling."
Harvey says the danger on the ground and from above is top of mind.
"Obviously, we're extremely aware of that right now because of the fatality to the U.S. Forest Service firefighter who was killed by a falling tree," he says.

Chief Ranger Michael Doane of the Sacramento County Parks Department says this fire was similar to the others on the river in recent weeks -- all were caused by people.

"We believe that the majority of those were caused by arson because of the fact that it was spaced out," Doane says. "Fire started up the trail, then another fire started. But, some of the arsons that we've had this season have been caused as  the result of an illegal camp."

The blaze was first reported at about 9:30 a.m.

Some 10 fire trucks and a boat responded to the area to battle the blaze.

Crews were able to knock down the fire shortly after 10 a.m.

Employees in the area say they're worried w so many fires on the parkway this summer. Intentional or carelessness? pic.twitter.com/vSkmuRJ82A

.@sacfiredept working fire on American River up from the confluence pic.twitter.com/TkcPHgbcy8