Stories of high-profile celebrities, like Caitlyn Jenner, have catapulted transgender issues into the national spotlight. Still, the increased media coverage hasn’t provided a full picture of the challenges transgender men and women face on a daily basis.

Rates of unemployment, poverty and homelessness are higher in the transgender population. Discrimination is common and one study found that suicide attempts among the trans population is 41 percent, compared to the general population’s 4 percent.

These sobering statistics show there’s more work to be done, says Rachael Hudson, the operations manager at the Gender Health Center, a resource space for Sacramento’s LGBT community. The center has a special focus on helping transgender clients.

“We have had events for the transgender community where there’s been over 100 trans people there, so there’s hundreds of trans people in Sacramento, that I know of,” says Hudson.

Leon Burse, a student at Sacramento State and former member of the university’s women’s basketball team, says Jenner’s revelation and recognition has been positive, especially for athletes like himself.

Burse is entering his fifth year at Sacramento State. For the past four years, he played on the women’s basketball team, helping the Hornets tie for second place in their conference.

Burse says growing up, he knew he was different.

“For me, I feel as if I have a boy’s brain, but a female’s body,” he says. “And I just need to have everything on one accord.”

He says he grappled with depression over the years because of gender dysphoria, when a person experiences distresses because they feel their gender identity does not match their biological sex.

“I had a great team, I had a winning season, yet I was still unhappy,” he says.

Burse turned to the Gender Health Center for counseling. He says the information he received from the center helped him realize that he wanted to go through the physical process of transition.

“At the end of the year, I’m making myself happy,” says Burse. He says he’s gotten the support of both close family and friends after making the decision. 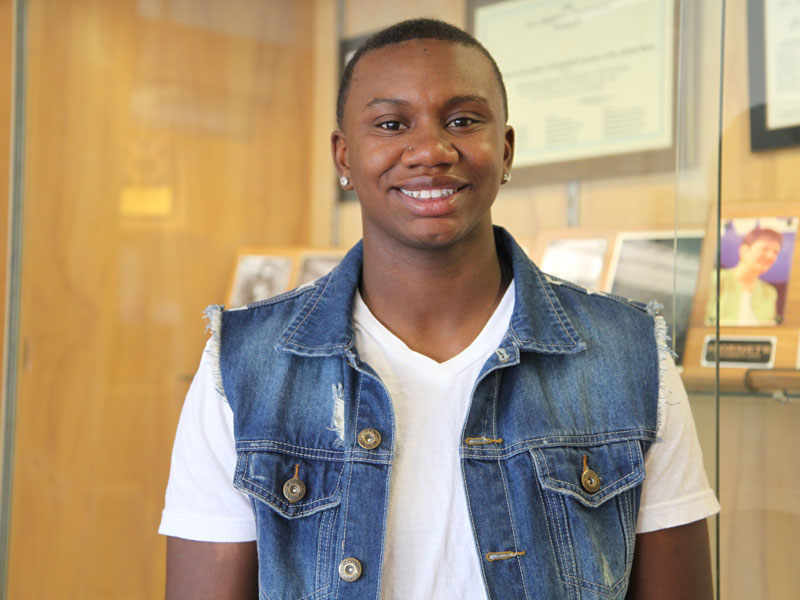 SacState student Leon Burse, who is transgender, is going through transition this year. Burse will intern at Sacramento's Gender Health Center, which helped him go through the process. Marnette Federis / Capital Public Radio

Services At The Gender Health Center

But others do not have the support system that Burse has. Hudson says many transgender men and women deal with isolation, discrimination and harassment.

“Getting on the bus to come to work, just walking down the street, that really is tough for people, and they need to talk to somebody about it,” says Hudson.

The Gender Health Center first opened its doors in 2010, primarily to offer mental health services.  Since then, the center has expanded its services beyond counseling. In 2010, the center saw just eight appointments a week. Today, there are about 250 appointments per week.

“Our numbers have grown exponentially,” says Ben Hudson, who is a transgender man and the center’s executive director.  “We serve, thousands of individuals a year. We serve transgender individuals coming from 26 different counties in northern California and central California.

Clients can get assistance on paperwork to change their gender. Twice a month, clients can come in, get blood work done and receive hormone prescriptions. Twice a week, the center has respite hours, meant to be a safe space for those who attend. It can be a casual group gathering or a place to go to if a person is in the midst of a mental health crisis.

Finding appropriate medical care can be difficult. Hudson explains that trans men and women often have difficulty finding doctors they can trust. Sometimes there are disputes when health insurance companies refuse to pay for hormones.

That discrimination can sometimes extend to the workplace. The unemployment rate within the group is twice that for those in the general population.

“If an employer sees somebody they see is gender variant or transgender, they usually don’t hire them,” says Rachael Hudson.

The center attempts to help with job searches, providing assessments and referrals to clients.

Ben Hudson, the center’s executive director, says these types of programs are critical for transgender people.

“Transgender individuals are an incredibly marginalized community,” says Ben Hudson, who is transgender and is married to Rachael Hudson. “Folks are experiencing high rates of suicidality, unemployment, substance abuse. The services are needed everywhere.”

Becoming The Man I’m Supposed To Be

The center also provides educational training for local businesses and schools. Ultimately, the center hopes to help clients find happiness by being themselves.

“That’s what being transgender is, to be that person who you are with your friends to everybody,” says Rachael Hudson.

In April, Burse started transition -- taking testosterone shots and scheduling a surgery to remove his breasts.

“You know, it’s all good to look the part of the man, but to actually be able to go outside without a shirt, is going to be like the greatest accomplishment, I got my name and gender changed on every paper work that’s possible,” he says. “I got my new social security card, so, my new license, I got all of that.”

Rachael Hudson says transition is different for everyone.

For Burse, transition has meant making difficult choices. He declined an invitation to play in front of scouts from national and international women’s basketball teams. It would have been a step towards playing professional basketball -- a dream he’s always had. But Burse is not looking back.

“This is going to make me closer to being the man I’m supposed to be,” says Burse. “So yea, I gave up the dream, but I don’t regret it.”

After recovering from surgery, Burse hopes to play for recreation leagues and eventually try out for men’s basketball teams.

Burse, who is majoring in social work, will be an intern at the Gender Health Center. He says he’s looking forward to helping others who are going through what he’s gone through.

“It’s a wonderful place to be involved with, just because you’re sharing the common interest of helping, but you’re also promoting that it’s ok to be who you are,” he says.