10:10 p.m. - The Wragg Fire quickly grew to 4,000 acres Wednesday evening, with mandatory evacuations and road closures in place. The Napa and Solano counties fire is 5 percent contained, with smokey skies across much of northern California.

Officials say 150 structures are threatened in the Quail Ridge community.

As of late Wednesday, there were 380 personnel assigned to the incident, which is being attacked by air and with ground crews.

6:42 p.m. - Fire officials say the Wragg Fire has grown to an estimated 1,000 acres as of 6:30 p.m. There are 10 air tankers and four helicopters working the incident, with ground crews being transported to the scene.

The fire is now 5 percent contained. 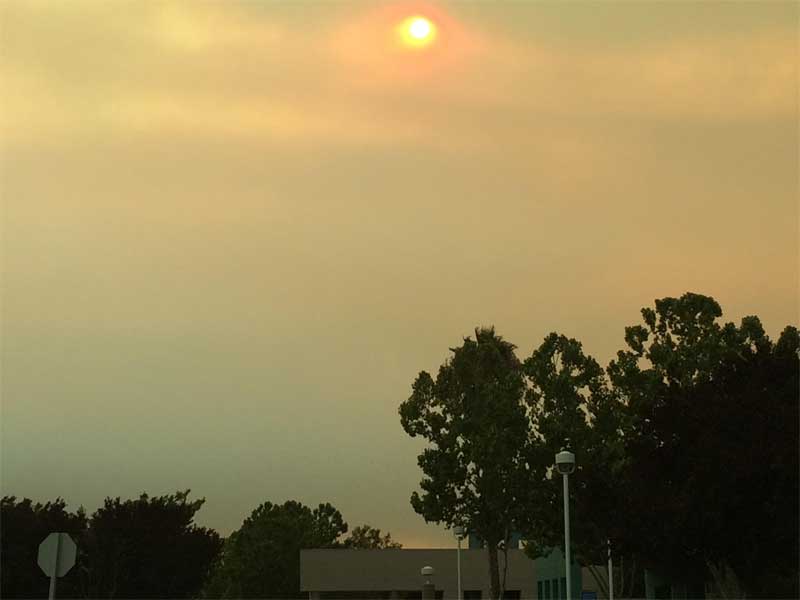 Smoke from the Wragg Fire has turned the skies above Davis a milky yellow tint. Photo courtesy Sarah Hoover.

6:25 p.m. - Smoke from the Wragg Fire is filling the sky near Davis, with some reports of ash falling in the area. The smoke plume is also visible on weather radar.

Driving to Davis? Turn those headlights on! smoke from #WraggFire making it look like early nightfall @CBSSacramento pic.twitter.com/ymEOSb0nQB

If I didn't know better, I would think rain on the way. Sky is completely grey in Davis with eerie red/orange glow over the city. #WraggFire

Not a storm.... The smoke plume from the #WraggFire on radar! #cawx pic.twitter.com/XKudrh2hAQ

5:25 p.m. - Cal Fire is working to contain a 700 acre fire burning near Lake Berryessa off Highway 128 in Napa County. Investigators have determined the fire was caused by a vehicle accident.

The agency says the fire is traveling at a rapid rate of spread due to erratic winds, brush covered, rugged and steep terrain, with difficult access. The fire was 0 percent contained as of 5:30 p.m.

Cal Fire says crews and air resources are working on perimeter control and containment. Evacuations are in effect, in the area of Cold Canyon for hikers.

Highways 128 is closed in the fire area.

The fire is threatening structures in the Mix Canyon area.

Investigators have determined the cause of the #WraggFire near Lake Berryessa was a result of a vehicle accident.

For the latest on the #WraggFire south of Lake Berryessa & Hwy 128 (in Napa & Solano counties) visit http://t.co/VgqT7DfpEI