Several area campgrounds are still evacuated, and Highways 4 and 89 remain closed in the Monitor Pass area.

Several campgrounds along Highway 4 to the north end of Markleeville remain evacuated. For the safety of the public and active fire suppression activities, Highways 4 and 89 in the Monitor Pass area remain closed, as do the Turtle Rock and Indian Creek campgrounds. Markleeville residents remain under an evacuation advisory issued by Alpine County Sherriff’s office. No mandatory evacuations are in effect at this time.

Twelve helicopters and 8 air tankers support the suppression effort on the fires, dropping retardant, ferrying equipment and supplies, transporting firefighters, and providing essential surveillance of areas far inside the perimeter not safely accessible by foot. Other key resources include 19 engines, 10 water tenders, and 19 crews. There are approximately 500 personnel assigned to the fire.

Firefighters made significant progress around the entire fire perimeter, with their priority being the line along the north of State Highway 89. The primary tactical priority is to prevent the fire from reaching Markleeville. The next priorities are to buttress the lines along Wolf Creek and the Leviathan Mine reclamation site.

The fire was ignited by lightning, that occurred in previous storms in the weeks before, yet remained undetected until Friday, June 19th. 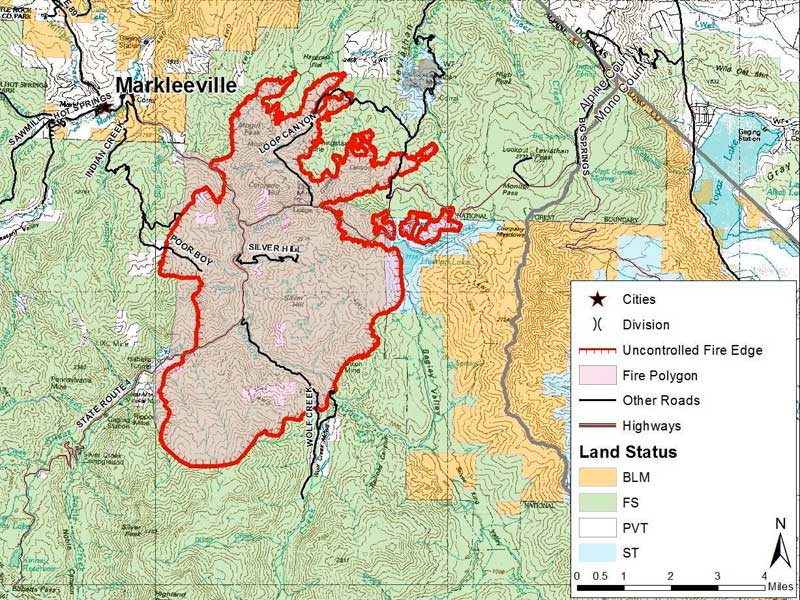 3:20 p.m. - The Washington Fire southeast of Markleeville in Alpine County has grown to 16,544 acres and it is spreading to the north and east.

Denise Alonzo with the U.S. Forest Service said the wildfire has spread rapidly due to erratic and strong winds.

"And the winds really pushed this fire around through the fuel, which is really dry, because of four years of drought,” said Alonzo. “It's burning quickly through heavy timber."

Alonzo said that the 500 firefighters are making progress. And, they've gotten a bit of a break with lighter winds Tuesday.

But she said, there is no containment yet.

"Unfortunately, it's kind of spreading up slope in all directions,” said Alonzo. “But we do have 17 engines, 11 helicopters, 8 air tankers, water tenders, 15 hand crews, and 22 overhead, working to try and contain this fire and stop the spread."

Alonzo said the weather forecast for the weekend includes the potential for stronger winds which could make it harder for crews to get a handle on the wildfire.

She said Highways 4 and 89 in the Monitor Pass area remain closed. And the Turtle Rock and Indian Creek campgrounds are closed. As a precaution, Markleeville residences have been advised to prepare for an evacuation. But Alonzo said as of Tuesday afternoon, there were no mandatory evacuations in effect for Markleeville.

“The tactical priority is to prevent the fire from reaching Markleeville,” said Alonzo.

10:20 a.m. - A wildfire near the Sierra Nevada town of Markleeville has burned 16,544 acres and is zero percent contained.

The fire was sparked by lightning on June 19 at around 7 p.m. Officials reduced the fire's containment to zero due to winds. Crews were also unable to battle the blaze initially due to it burning in unsafe areas.

One firefighter reportedly suffered a heat-related injury. That firefighter was treated and is recovering.

No mandatory evacuations are in effect for Markleeville, but some campgrounds are closed. Highways 4 and 89 in the Monitor Pass area remain shut down.

About 500 personnel are assigned to the fire.