UPDATE: Gov. Jerry Brown got his conservative revenue estimates. Democratic lawmakers got money for some of their top priorities. And California now has a state budget deal.

Less than 24 hours after lawmakers passed a budget that relied on higher revenue projections, Gov. Brown came out with Democratic legislative leaders to make this announcement:

“Very happy to report that after some rather strenuous negotiations, that we reached a sound agreement on the budget,” the governor said at a Capitol news conference Tuesday. 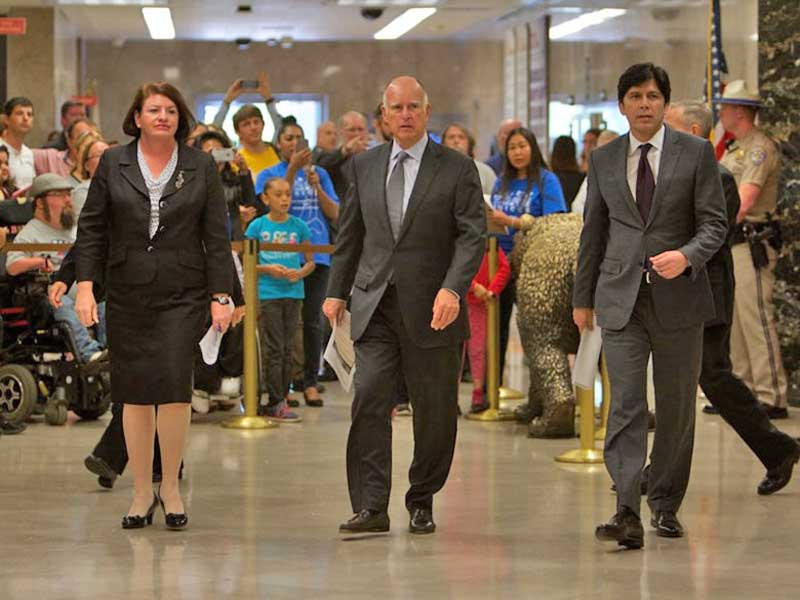 “Other than the budget the Assembly and Senate passed yesterday, this is the best budget that we have seen in years,” says Assembly Speaker Toni Atkins.

Senate President Pro Tem Kevin de León says the budget deal strikes a responsible balance “between strengthening our long-term fiscal foundation and investing right now in the economy of today and the workforce of tomorrow.”

Assembly Republican Leader Kristin Olsen says it’s too soon to say if her caucus will back the agreement.

“We’re very pleased that he held the Democrats to that lower, more conservative revenue projection,“ Olsen says. “The downside is he agreed to new, ongoing spending in the budget.”

Left out of the agreement: money to end a rule that limits aid for children born into the welfare system and higher rates for Medi-Cal providers. But the governor did announce that he’s calling a special session of the Legislature to stabilize the Medi-Cal system – and a separate special session on road and highway funding. Both will likely bring proposals for new taxes or fees.

The $115 billion general fund spending plan relies on the governor’s conservative revenue estimates. But it also includes money for some of the lawmakers’ top priorities, including child care and higher education. The governor called negotiations "strenuous," but says the budget is sound.

"All in all, I’d say it’s been difficult but very productive, and certainly I’m glad that we got this far," says Brown.

Under the deal, the state will begin providing health care to children living in California illegally. It also offers the UC and CSU systems more money if they enroll more California students. Lawmakers are expected to vote on the deal by the end of the week.

The governor also announced he’s calling two special sessions of the Legislature -- one to raise money for road and highway projects, and another to sustainably fund Medi-Cal.

UPDATE: 1:30 p.m. Gov. Jerry Brown and California lawmakers announced a budget deal Tuesday afternoon. As part of the deal, Brown is calling the Legislature into two special sessions to determine funding for transportation and Medi-Cal.

According to a press release from Brown's office, the budget deal is "consistent with prudent May Revision revenue estimates."

.@toniatkins: Other than the #cabudget that the #caleg passed yesterday, this deal is "the best we've seen in years" pic.twitter.com/nYK8FMcC3g

Original Post: When Gov. Jerry Brown announces a state budget deal with California lawmakers – which could come as soon as this afternoon – he will also announce that he’s calling the Legislature into two special sessions designed to pass targeted taxes and fees.

One of the special sessions would be designed to raise money for road and highway funding – a goal highlighted by the governor in his January inaugural address. Proposals from lawmakers this year have ranged from vehicle fee and gas tax increases to surcharges for zero-emission vehicles.

The other special session would deal with taxes on managed care organizations (health insurers) and tobacco products. The money would be used to restore Medi-Cal provider rates that were cut during the recession.

The governor has called a press conference at 1:30 p.m. Tuesday at the state Capitol.