(AP) -- State and local roads leading to wineries south of Napa, around the community of Carneros, we're closer to the quake's suspected origin and showed more damage than elsewhere. By the middle of the afternoon, road crews had patched a section of state Highway 121 where the roadbed had shifted, cracking open the surface. Nearby, crews repaired a local road where the roadbed had dropped several inches.

Off that road, vintner Richard Ward of Saintsbury winery oversaw workers righting giant toppled barrels and rescuing a 500-pound grape de-stemmer that the quake had thrown to the ground.

"That's what happens when you're a mile from the epicenter," he said, turning to point toward hills where the quake apparently started.

Ward lost 300 to 400 bottles in the winery's basement. The grape harvest was supposed to have started overnight tonight, but would now be pushed off a few days, he said. Had the harvest started last night, the quake would have caught the workers in the wine buildings, with the heavy barrels, when it struck, Ward said.

California emergency management officials say they believe they "have a handle" on the damage from the earthquake that struck the Napa region early Sunday morning.

"While it was bad, it wasn't as bad as it could be - and it was very manageable from a regional perspective," said California Office of Emergency Services Director Mark Ghilarducci.

At the peak of what Ghilarducci called the "dark period," the period immediately following the quake when first responders and emergency managers were sizing up the damage, 70,000 people were without power. As of mid-afternoon, power had been restored to all but 20,000.

More than 170 people were injured in the quake, which struck at 3:24 a.m. Sunday six miles southwest of Napa, but no one has died. About 100 homes have been "red-tagged" so far or designated unsafe to enter. Ghilarducci said all bridges in the area have been checked and are secure with no damage.

"By midday, we got a better sense of really what was happening," Ghilarducci said at a mid-afternoon media briefing on the quake. "It took roughly half a day to get our hands around the complexity of the event. "

State Geologist John Parrish said the earthquake measured magnitude 6.1. He said even though it was a strong quake, the damage wasn't as bad as it could have been because of where it struck.

"The geology of the area is pretty much soft muds, and that tended to dampen the surface shaking and the surface waves that went through the area," Parrish said. "And with that lack of ground motion, we got less shaking onto the structures and had more of a confined damage area to the Napa/American Canyon area, with little damage going beyond that."

Parrish said the quake struck on the West Napa fault. He said there have already been between 50 and 60 aftershocks, none larger than magnitude 3.6. Parrish said it's unlikely there will be any larger aftershocks, but the smaller ones will likely continue for weeks.

The most significant damage was in downtown Napa, but there was some damage to older buildings in downtown Vallejo too. Ghilarducci says the quake was felt as far north as Ukiah and as far south as Salinas.

(AP) -- Pacific Gas and Electric Co. has reduced the number of customers without power to about 17,000, spokesman Jeff Smith said. Right after the earthquake hit 12 hours ago, about 70,000 people were without power, he said.

There have been "no reports of significant damage" to the company's equipment, Smith said. Crews are continuing to assess the situation, he added.

If customers smell gas or experience an emergency, they should call the company immediately, Smith said.

Customers should not try to turn their gas on themselves, he said. Customers should call Pacific Gas and Electric "to get your gas back on" to avoid a potentially dangerous. 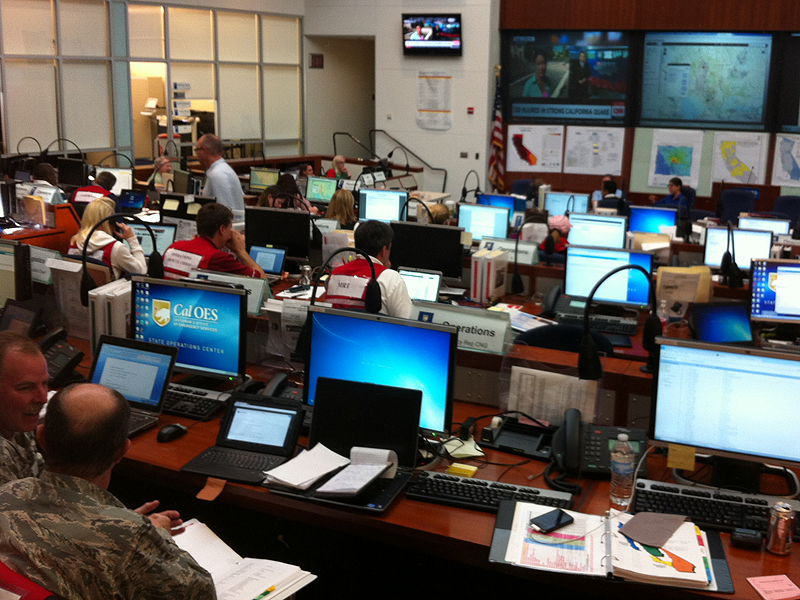 (AP) -- The California Department of Transportation has inspected San Francisco Bay Area state highways and structures and says all damage appears to be minor, following the 6.0-magnitude quake in Napa.

The agency says bridges and roadways are open and safe for travel.

U.S. Sen. Barbara Boxer, D-Calif., said in a statement that she will be sending staffers to hard-hit Napa on Monday and said: "I will be talking to local officials about how we can help ensure that residents, businesses and communities have the resources they need to recover and rebuild."

Queen of the Valley Medical Center in Napa, which treated 120 people, has some damage from the earthquake. That included burst pipes in a non-patient area, ceiling tiles falling off in office areas and minor structural damage to an outbuilding.

Spokeswoman Vanessa DeGier said: "We are open 24 hours a day and so some of our staff did sustain some injuries," which she characterized as minor.

Gracie Ramirez, 19, was at Queen of the Valley Medical Center in Napa to visit her sister-in-law, Connie Navarro, who gave birth to a boy about 10 minutes before the quake struck.

Ramirez said: "The nurses were grabbing the baby and, you know, trying to check all his fingers and toes, and then 'boom.'

"The computers fell, the hospital was a mess, they told me that one of the nurses was injured because a computer fell on her."

Napa Public Works Director Jack LaRochelle says it could take as long as a week to repair 60 water mains that broke or sprung leaks. He says residents serviced by mains that had to be shut down for repairs could be without water in their homes for that long.

LaRochelle stressed that it was still safe to drink from municipal taps, and the water plants for the city were not damaged.

A youngster rides his scooter over a sidewalk buckled by an earthquake Sunday, Aug. 24, 2014, in Napa, Calif. A large earthquake caused significant damage and left at least three critically injured in California's northern Bay Area early Sunday, igniting fires, sending at least 87 people to a hospital, knocking out power to tens of thousands and sending residents running out of their homes in the darkness. Rich Pedroncelli / AP 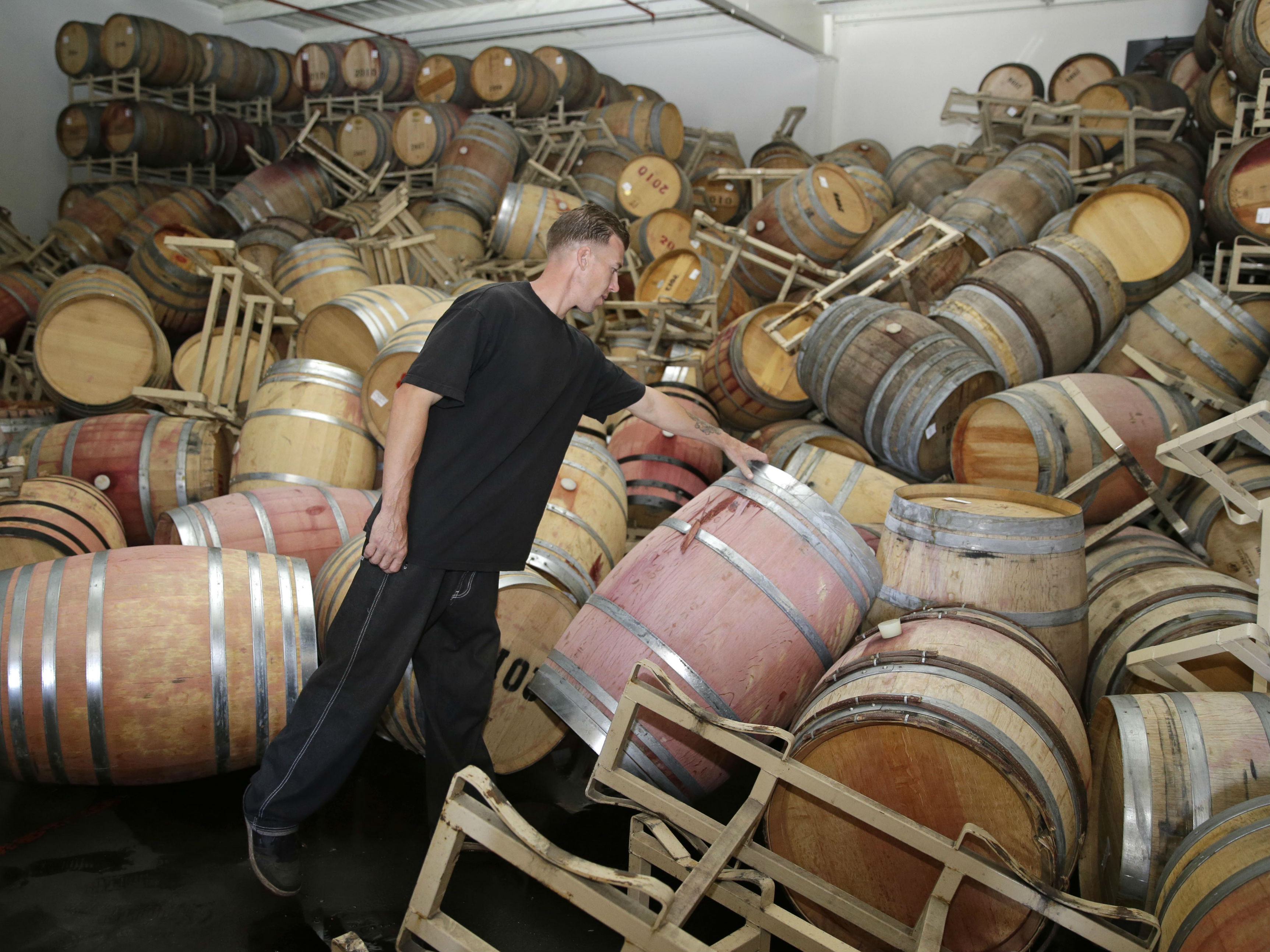 (AP) — Officials in the city of Napa say 15 to 16 buildings are no longer inhabitable after Sunday's magnitude-6.0 earthquake, and there is only limited access to numerous other structures.

Parness says the buildings to which only limited access is being granted mostly suffered broken windows.

The magnitude-6.0 earthquake that struck at 3:20 a.m. Sunday about 6 miles from the city of Napa ruptured water mains and gas lines, left two adults and a child critically injured, upended bottles and casks at some of Napa Valley's famed wineries and sent residents running out of their homes.

The earthquake is the largest to shake the Bay Area since the 6.9-magnitude Loma Prieta quake in 1989.

(AP) — Gov. Jerry Brown has declared a state of emergency for the part of California's wine country hard-hit by a large earthquake.

The governor issued a proclamation directing state agencies to help respond to the 6.0-magnitude quake that struck early Sunday about 6 miles from the city of Napa.

Callanan says three people are reported to be in critical condition, including a young child who was struck by part of a fireplace and airlifted to a specialty hospital for a neurological evaluation.

(AP) — Three people were seriously injured after a large earthquake caused significant damage in California's northern Bay Area, and nearly 90 patients have been treated at one hospital.

The city of Napa in California wine country said in a statement Sunday that two adults and one child have critical injuries and Queen of the Valley hospital in Napa has treated 87 people. Hospital spokesman Vanessa DeGier says most patients have cuts, bumps, bruises.

The earthquake struck just before 3:30 a.m. about 4 miles northwest of American Canyon, which is about 6 miles southwest of Napa.

Thousands are without power, buildings and roadways have been damaged, and water and gas breaks have been reported.

(AP) — Injuries are being reported after a large earthquake rolled through California's northern Bay Area early today, damaging some buildings and knocking out power to thousands.

The extent of the damage isn't clear but Napa Division Fire Chief John Callanan says two major injuries have been reported, and hospitals have been very busy with moderate injuries.

Napa Fire Capt. Doug Bridewell says the quake has caused fires and collapses. He himself had to climb over fallen furniture in his home to check on his family before reporting to duty. He says it was the worst shaking he'd ever been in.

The shaking emptied cabinets in homes and store shelves, set off car alarms and had residents of neighboring Sonoma County running out of their houses.

USGS says it's the largest earthquake to shake the Bay Area since the 6.9 magnitude Loma Prieta quake in 1989. 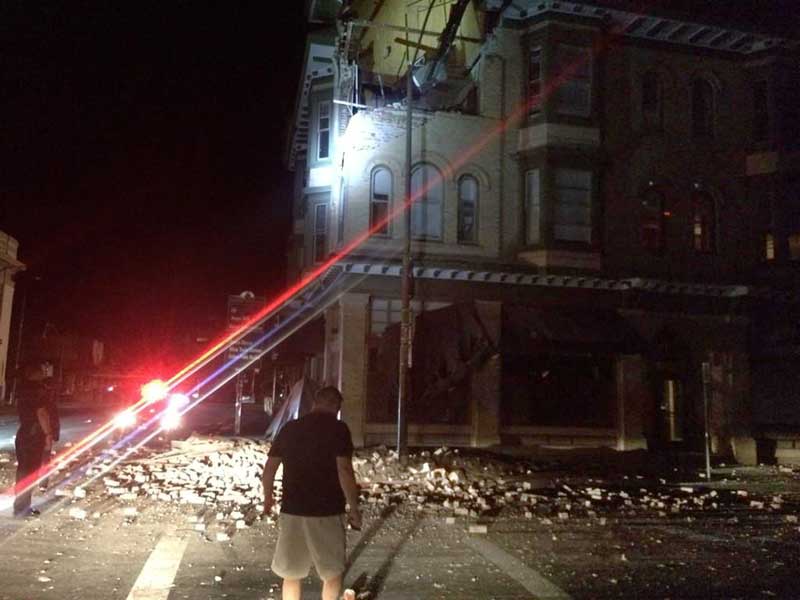 This photo provided by Lyall Davenport shows damage to a building in Napa, Calif. early Sunday, Aug. 24, 2014. Officials say an earthquake with a preliminary magnitude of 6.0 has been reported in California's northern San Francisco Bay area. Lyall Davenport / AP 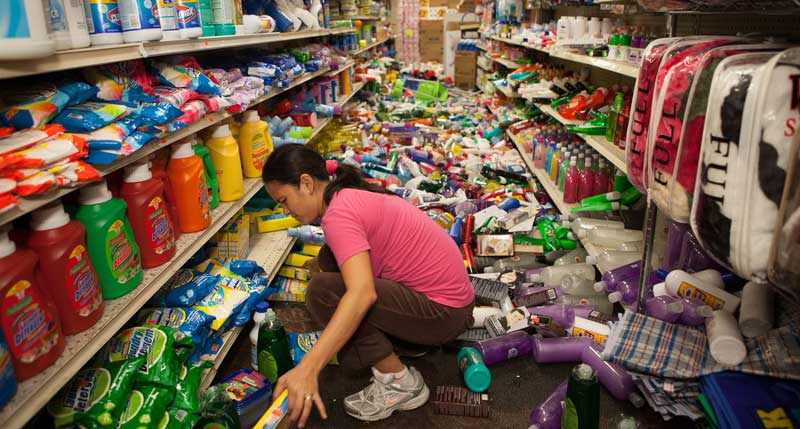 Nina Quidit cleans up the Dollar Plus and Party Supplies Store in American Canyon, after an earthquake on Sunday, Aug. 24, 2014. Quidit and her husband were woken up in the early morning hours by the store's alarm company and immediately drove in to begin cleaning up. Alex Washburn / AP

(From NPR and AP reports)

The USGS says the epicenter was just north of the Bay area, near Sonoma Valley and Napa Valley and American Canyon. The quake struck at a depth of 6.7 miles, USGS says, and numerous small aftershocks have occurred in the Napa wine country. 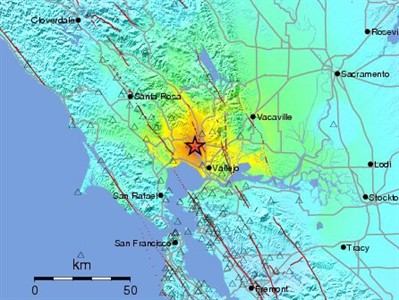 Leslie Gordon of the USGS says the tremor struck at just before 3:30 a.m. Sunday about 10 miles northwest of American Canyon, which is about six miles southwest of Napa, California, and about 50 miles west-southwest of Sacramento.

The USGS says it's the largest earthquake to shake the Bay Area since the 1989 6.9 magnitude Loma Prieta quake.

The shaking set off car alarms and had residents of neighboring Sonoma County running out of their houses in the middle of night. Officials say widespread power outages have been reported in Sonoma County.

Electric and gas utility PG&E's website shows that thousands of people in the area in and around the epicenter are experiencing outages.

A member of Napa County dispatch tells The Associated Press that there has been one report of structural damage, but additional details were not available.

There was no immediate report of injuries.

Update 4:35 a.m.: From all the reports we’ve heard over the last hour-plus, it’s apparent that the worst of the damage from this morning’s quake is focused in the city of Napa and surrounding communities.

Unconfirmed reports — unconfirmed — relayed by KCBS say there’s been some road and possible bridge damage on Highway 12 in Napa and Highway 37 in Vallejo.

KCBS reporter Curtis Kim went on the air with a report that the CHP was closing one of the Highway 37 bridges in Vallejo. We’re not sure from the report which bridge it is.  More from KQED.