The senator was taken into custody on suspicion of driving under the influence early Friday morning.

"I am truly and profoundly sorry for the unacceptably poor personal judgment which I demonstrated last night. As someone who cares deeply about the public safety, I sincerely apologize to my family, my constituents and my colleagues in the Senate for breaching the trust they’ve all placed in me.  I accept complete personal responsibility for my actions and any punishments that ultimately come my way as a result of this incident. I will also engage in immediate, corrective actions to ensure this kind of personal conduct is never repeated."

"My reaction to the events of the prior evening are extreme disappointment," Steinberg said after the Senate adjourned on Friday -- without Hueso in attendance. "It’s a lapse of personal judgment and I’m only glad that no one was hurt."

Asked about the photo that appears to show Sen. Hueso, Sen. Ricardo Lara (D-Bell Gardens) and several Assembly members drinking on a Capitol balcony late Thursday night, Steinberg responded: "The picture speaks for itself. Obviously, the whole situation, I’m not happy about."

Hueso was arrested while driving a state-owned Ford Fusion. Steinberg said lawmakers who live outside the Sacramento region have access to state-owned pool cars while they're in town. He also pointed out that the Capitol's Sergeant-at-Arms Special Services Department are available to provide members with vehicle transportation.

(AP) -- Democratic state Sen. Ben Hueso says he will try to prove his innocence hours after being arrested for drunken driving in the state capital.

Hueso emerged from Sacramento County Jail about 11:45 a.m. Friday and told reporters "the process isn't over."

He would not comment on what he was doing in the hours before his DUI arrest near midtown Sacramento at 2:39 a.m. Friday.

He wore black slacks, a red-and-white pinstriped dress shirt and black shoes as he walked from the jail to a waiting black van.

With a serious look and speaking softly, Hueso told reporters that he will "pursue my innocence."

Update at 11:40 A.M.: Listen to CHP Officer Julie Powell's statement on Hueso's arrest by clicking the "play" button above. Here's the transcript:

"On August 22nd, 2014, at approximately 0224 hours, a state of California-owned white Ford Fusion was observed traveling northbound on a one-way, southbound-only city street in Sacramento, CA.

At this time, officers from the CHP South Sac area were traveling southbound on 15th St. and observed the Ford make a U-turn and proceed southbound.

A traffic stop was initiated and the driver of the Ford stopped in a parking lot at 15th St. and X St.

"Upon contacting the driver and solo occupant, the officer observed objective signs and symptoms of alcohol intoxication.

Mr. Hueso was subsequently arrested without incident for a violation of California Vehicle Code Section 23-152-A, misdemeanor driving under the influence. He was booked into the Sacramento County jail at 0327 hours."

A deleted tweet from Asm. Lorena Gonzalez (D-San Diego) obtained by Capital Public Radio appears to show Hueso and several other lawmakers drinking on a balcony just off the Assembly chambers Thursday at 11:19 p.m.

.@sacsheriff: Hueso arrested by CHP at 2:39AM at 15th & X Streets in midtown Sacramento. He was booked into custody at 3:54AM.

The California Highway Patrol says it has arrested California state Sen. Ben Hueso (D-San Diego) on suspicion of driving under the influence.

Hueso was booked into the Sacramento County jail at 3:27am Friday morning.

The California Highway Patrol's South Sacramento division is listed as the arresting agency.

According to the Sacramento County Sheriff's Department, Hueso faces misdemeanor charges for driving under the influence of alcohol and driving with a blood alcohol content of 0.08 percent or more. His bail was set at $1,482.

Sen. Hueso's office did not immediately return a request for comment.

Hueso is serving his first term in the Senate after winning a special election in March of 2013 and chairs the Senate Veterans Affairs Committee. Before that, he was a member of the Assembly since December 2010 and chaired the Assembly Water, Parks and Wildlife Committee. 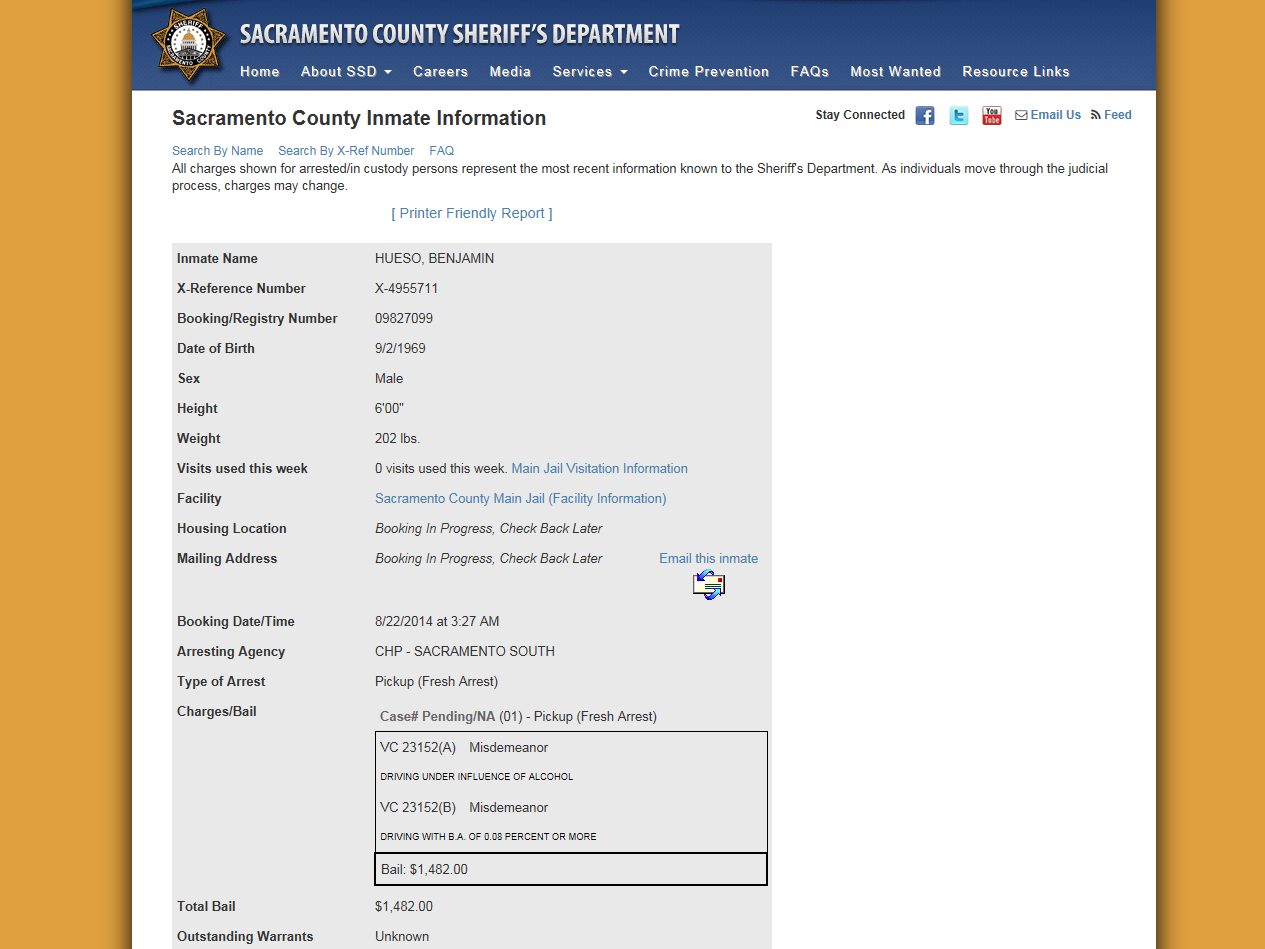