As the news of Robin Williams’ death settles in, a local comedian and two journalists talk about their interactions with the man.

Jensen is a Sacramento comic and shared the bill with Williams a handful of times.

“His notes are often notes that would be useless to anyone but him,” said Jensen. He said Williams would often recommend comics throw a voice in here or make this character Russian.

“I can’t do a Russian accent,” said Jensen. “The most flattering thing would be that he knew your bits.”

Jensen does a few atheist jokes and he said Williams would request them specifically. Jensen recalled one time when he was working on a “bit” about a guy who had a verse from Leviticus tattooed on his arm and he really wanted Williams to hear it. After Jensen’s set he ran into Williams on his way in. Williams had tried to make it in but someone else requested his attention.

“He was very generous that way,” said Jensen.

Jensen said Williams asked him to perform the joke right there in the parking lot; for just him and one other person. So he did.

Jensen’s Facebook profile picture is one of him and Williams. Jensen looks extremely happy and Williams’ is resting his head on Jensen’s chest.

“Robin always looked sad,” Jensen said, referencing Williams’ look in the photo. “When he’s not actively engaged in a manic impersonation or something, his relaxed face looks very sad. I think that was the magic of Robin. It sounds like a strange thing to say when we find out how manic he was.”

It’s that honest darkness Jensen feels inspires him most about Williams.

“I consider him and Buster Keaton both influences in being ok with bringing that pathos to the stage,” said Jensen. “I’ll talk about a lot of dark stuff on stage, but it’s not just subject matter; it’s presence and delivery. It’s ok to be very human up there – I think that makes the stories and jokes that much more powerful.”

Founder and publisher emeritus of AmericasComedy.com and Sacramento comedy enthusiast, Steven Bloom, only met Williams once, but cried when he heard the news of his death.

In 2011 Bloom’s company was a media sponsor for Comedy Day in the Park and he was backstage interviewing comics. Bloom said Williams wasn’t on the bill but showed up backstage and was immediately mobbed. 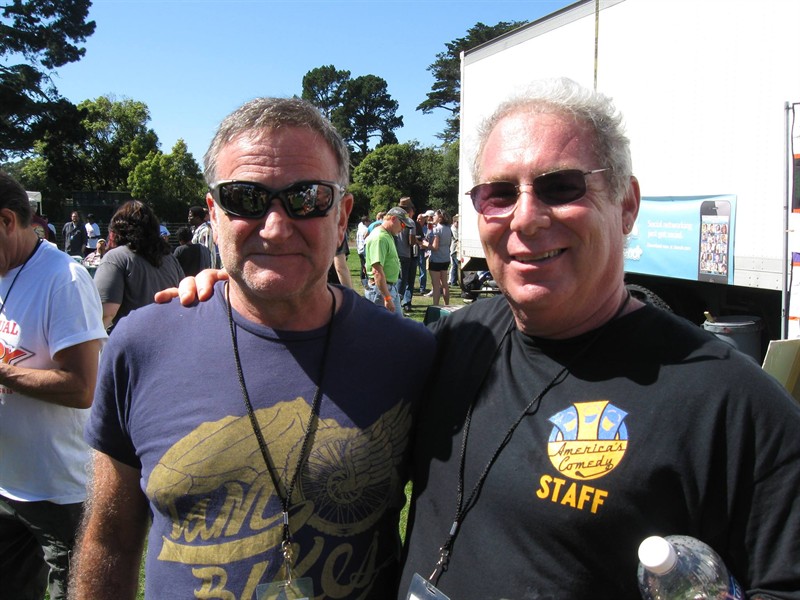 Robin Williams and Steve Bloom pose backstage at Comedy Day in the Park in 2011. Used with permission.

“He never said no, he was gracious to every fan, every picture – and there were hundreds of them,” said Bloom.

It was there Bloom got to do a quick interview and got this video shout-out from Williams.

“He’s a genius and the world needs genius,” said Bloom. “He was a gentle man and an extreme talent. The world really lost something.”

CapRadio Music’s own blues rocker, Mick Martin worked as a movie critic for TV and newspapers and interviewed Williams about half a dozen times. Martin said one time in particular stood out.

It was a press event for the movie “The Best Of Times” in 1983. Critics had seven minutes to shoot an interview and Martin said they were having a hard time getting anything out of Williams.

“One guy came out and he was practically in tears because all Robin did was talk about his tie and make funny faces at the camera,” said Martin.

Martin said he knew he had to try a different approach.

“I had just become a father and I knew he had,” said Martin. “So I asked him about the birth of his child and you have never seen a tenderer look in someone’s eyes – he was almost in tears. He just talked about how wonderful it was to have that little baby in his arms.”

When he left the recording area people asked Martin how he got Williams to be serious.

“I asked him a question that he cared about,” Martin replied.

“It was a great experience for me because I got to see the real Robin Williams,” said Martin. “I consider myself lucky - I met a very special person with a really big heart.”