Amy Quinton reports from nearby Middletown that CalFire made progress in controlling the wildfire, which is nearly 30 percent contained. The fire has burned 3,200 acres and destroyed eight structures.

A wildfire in rural Northern California that has forced the evacuation of 200 homes has grown to 5 square miles, though officials say crews aided by better weather made progress as they worked to control the flames overnight.

State fire Deputy Chief Gabrielle Avina said the blaze in the Pope Valley area of Napa County had burned 3,200 acres as of Wednesday morning, an additional 500 acres from the previous night.

It remained 30 percent contained. Avina said crews, however, were aided by higher humidity and lighter winds. They were expecting those conditions to hold through the day.

The fire has damaged one home and four outbuildings. In addition to the 200 mandatory evacuations, Avina says another 180 homes are threatened. 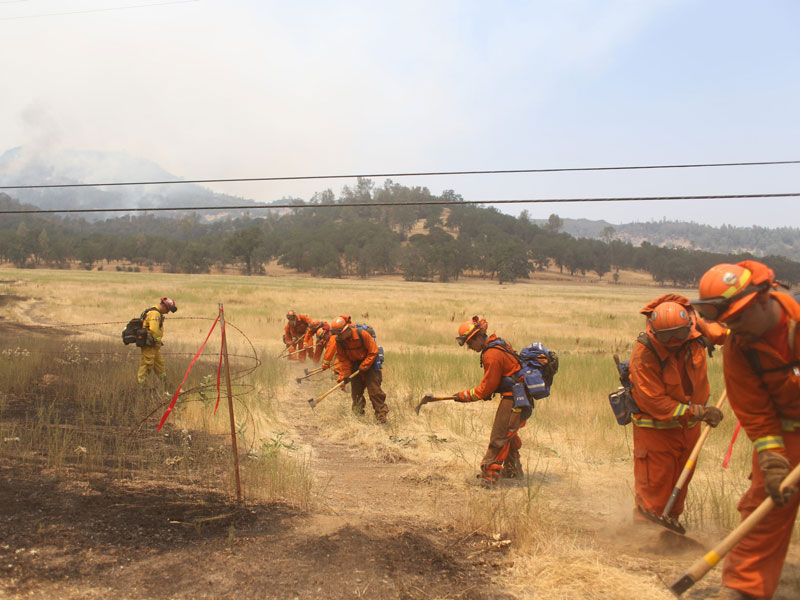 Smoke from the fire is visible in Davis -- though southerly Delta breezes have, so far, kept the smoke from floating directly over the city. The western horizon is a hazy mass of gray-brown smoke.

It's blanketing mountain ridges surrounding Lake Berryessa that are typically visible from Davis.

Tom Hall is with the Yolo-Solano Air Quality Management District.

"We're following two things: Obviously, the state of the fire and the work to get it under control," says Hall. "In addition to that, we're watching the wind and the inversion layer to ensure that smoke won't be impacting our residents."

Hall says people who are sensitive to smoke and are having difficulty breathing should stay indoors.

Meanwhile, Sacramento air quality officials say the smoke is not expected to blow into the capital city.

"Where the fire is, is pretty level with Woodland and that's the northern end of our district and ... the Sacramento air basin," says Hall. "So we would expect it, at this point based on the current wind, to push north towards perhaps Colusa County or even farther north."

Wondering about the haze in the area today? This is from smoke from the #Buttsfire in Southern Lake County. #cawx pic.twitter.com/erUBWdViRr

9 a.m. (AP) -- Crews have worked through the night to build containment lines around a wildfire in rural Northern California that has burned more than 4 square miles, damaged five structures and prompted mandatory evacuations.

State firefighters and crews from Napa, Lake and Solano counties spent the day working in 90-degree weather as they contained 30 percent of the fire.

McCambridge says several residents living in two communities have been evacuated because nearly 200 homes are threatened.

Five structures have also been damaged, but it wasn't immediately clear whether they were homes or other buildings.

Crews worked throughout the night on the #ButtsFire in Napa County. Fire is now 3,200 & 30% contained. 1,000 firefighters batting the fire.

The #ButtsFire in Napa County has grown to 800 acres. Ad the fire continues to grow @CAL_FIRE has activated an Incident Management Team.

#ButtsFire in Napa County continues to grow at a rapid rate. Lots of fire equipment and aircraft assigned. pic.twitter.com/3deqtZ0FJb