This is the second story in a two-part series about how municipalities are rethinking how to use recycled water in light of the drought. Read the first story about how wastewater is reused in the Fresno area.

Bill Hunt, executive director of operations for the Orange County Water District,  looks out at three large basins of water in Anaheim.

“It’s an aquamarine color. The water is brilliant and clear,” says Hunt. “It’s very inviting. On a warm day, you want to go in it. It’s beautiful water.”

Hunt is not describing a tropical ocean, but recycled sewage.

It’s replenishing the district’s large groundwater aquifer - which is the source of drinking water for 2.4 million people in Orange County.

“There’s a lot of water that goes to the ocean every day that could easily be recycled as we’re doing, and reused,” says Hunt. “It’s a great resource, it’s a shame to just put that out to sea.” 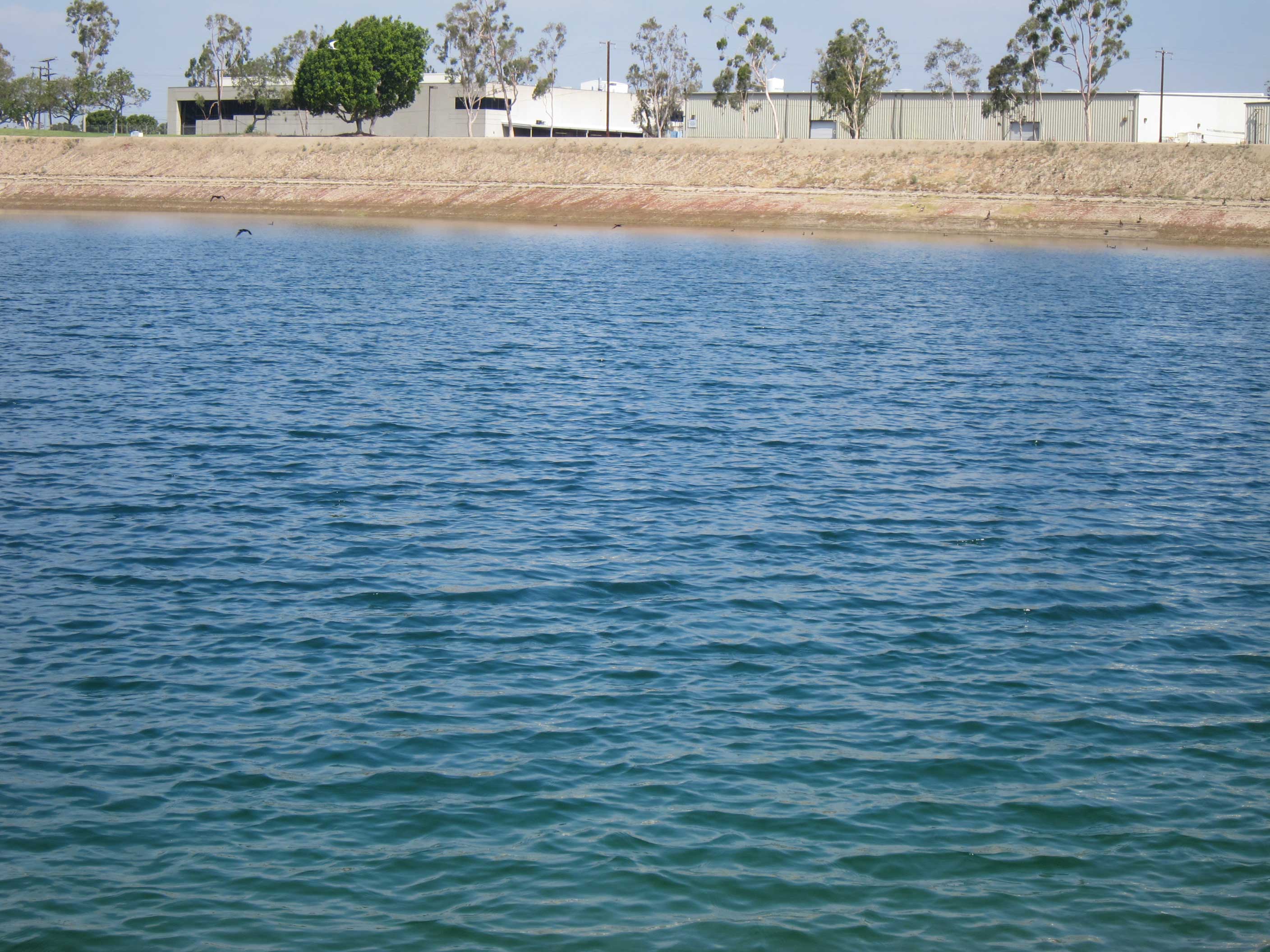 The plant's recharge basins where the water filters through sand and gravel to replenish Orange County's groundwater. This water eventually gets pumped for drinking.

But to understand just how this works, we need to back up. Water, whether it’s flushed or drained, ends up at the Orange County Sanitation District where it goes through treatment that makes it clean enough to release to the ocean.

The remainder is sent next door to a 24 acre facility run by the Orange County Water District. Mike Markus, general manager of the Orange County Water District, takes me to the first step in the process of making wastewater something you’d want to drink. It’s called microfiltration. The water is filtered through fiber straws with tiny holes in the side, holes that are much smaller than a human hair.

“Anything larger than that point two microns would stay on the outside of the straw,” says Markus. “So the microfiltration effectively removes bacteria, protozoa, suspended solids from the water.” 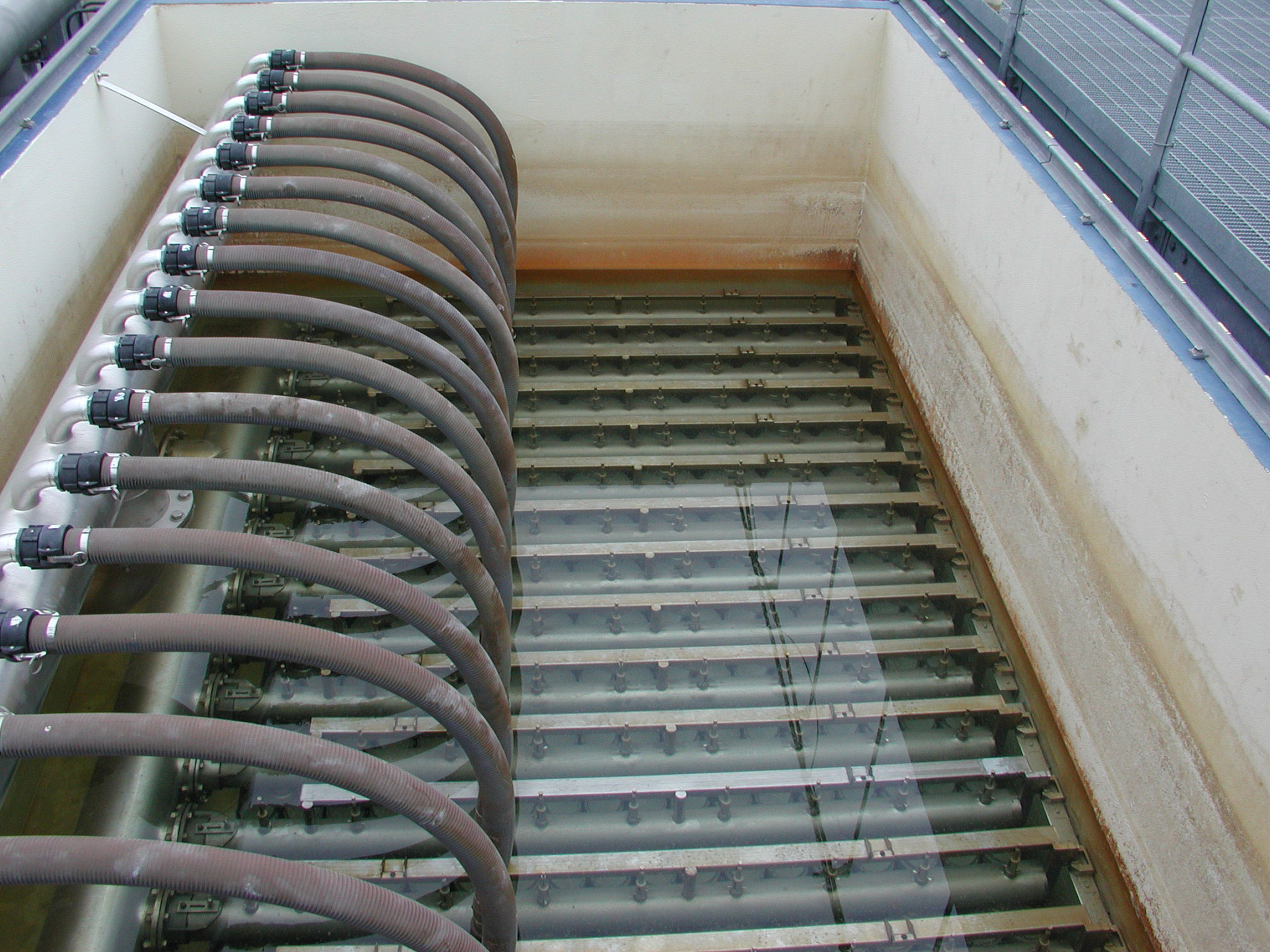 Water goes through a microfiltration process, leaving out solids, protozoa, bacteria and viruses.

Markus then takes me to the bowels of the plant where water is sent through a series of pipes and pumps before it hits what he says is the key to making water pure -- reverse osmosis.

“What the reverse osmosis very effectively removes is any virus, dissolved minerals and pharmaceuticals in the water, so this is really the work horse of the treatment process,” he says.

Row upon row of large white fiberglass tubes fill the room, inside are semi-permeable sheets of plastic called membranes. 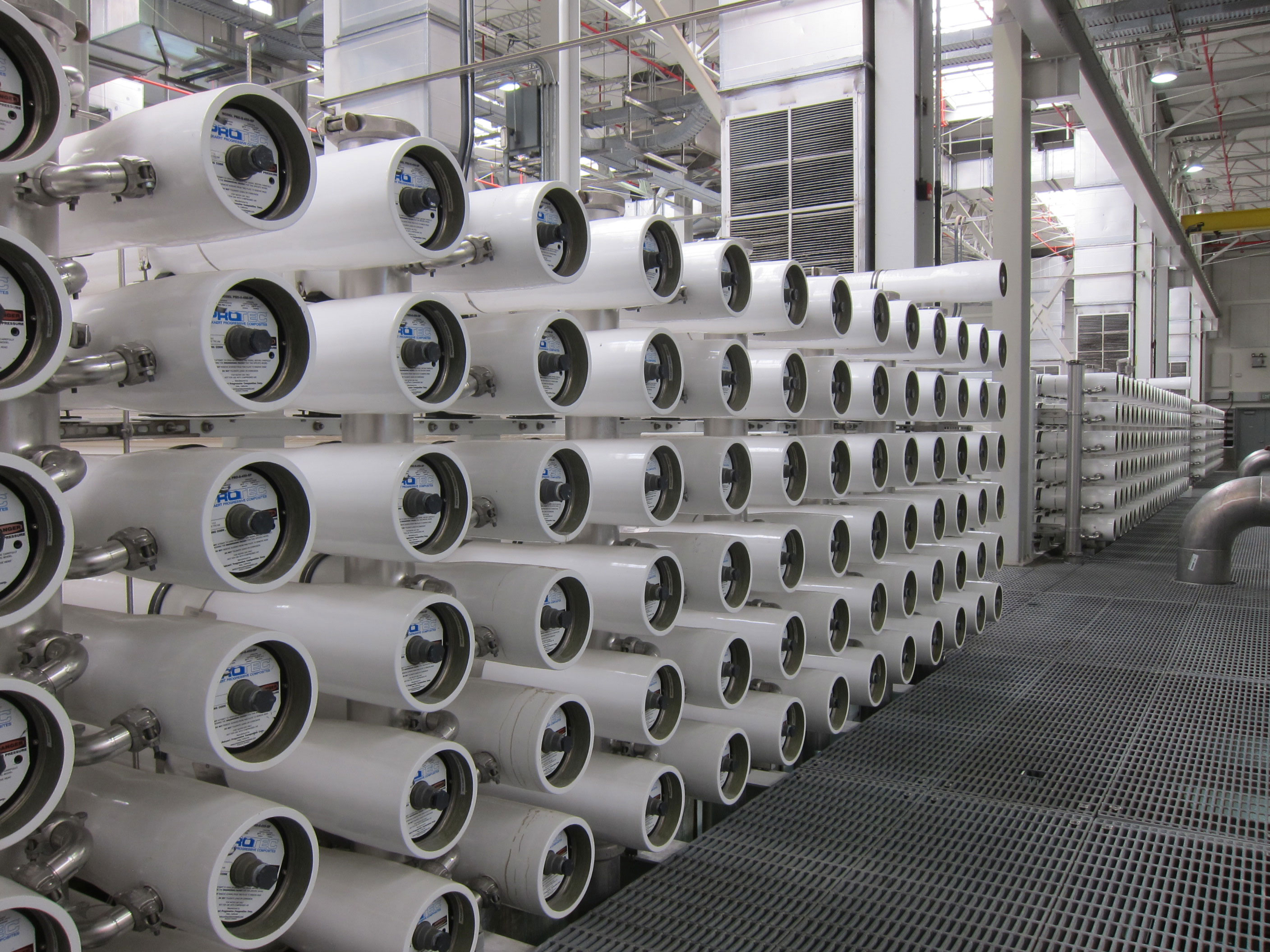 Reverse Osmosis forces water through a membrane. Only water molecules get through and the process removes chemicals, viruses and pharmaceutical. 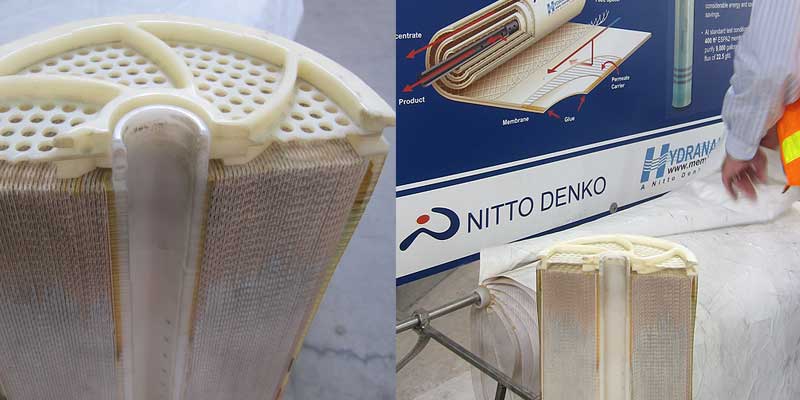 Water goes through a Reverse Osmosis membranes, which are paper-like material rolled up into tube cells. 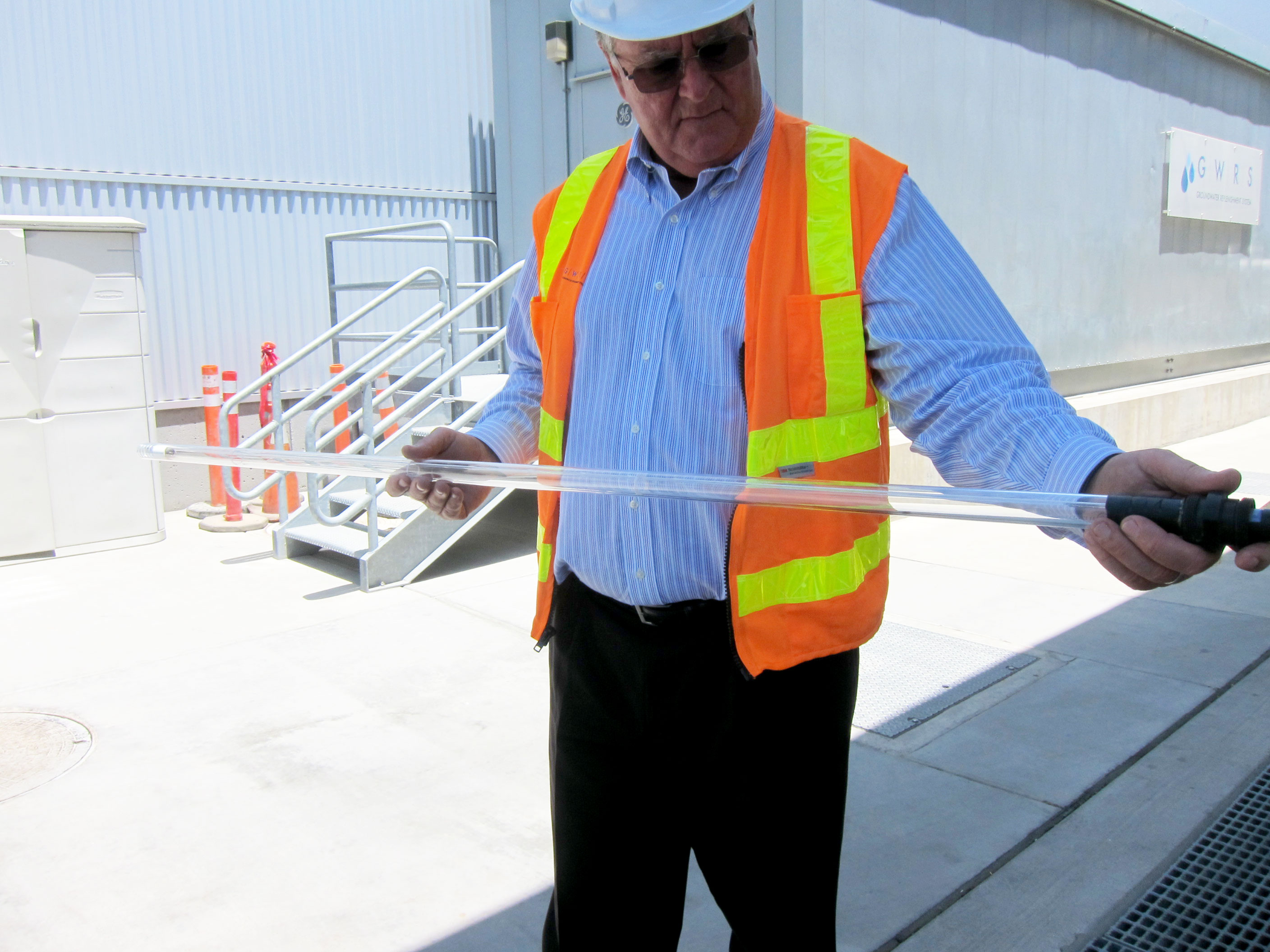 The final step in the process disinfects the water with UV light and hydrogen peroxide.

The last step adds hydrogen peroxide to the water and zaps it with UV light, killing anything that might remain. At this point, you can drink it. So I do. “This is awful,” I say.

It does taste absolutely fine. From that point it’s sent 14 miles up to the groundwater basins in Anaheim. Before these facilities were built, Markus says getting people in Orange County to believe you can safely drink sewage water was a long, long process.

“We began a ten year educational process,” he says. It was a difficult job --even the economics didn’t work out. It was going to be more expensive than importing water through the State Water Project. But Markus says they were able to prove that it would eventually become cheaper. With grants, recycling the water costs about $480 an acre foot. Imported water costs about $1,000. 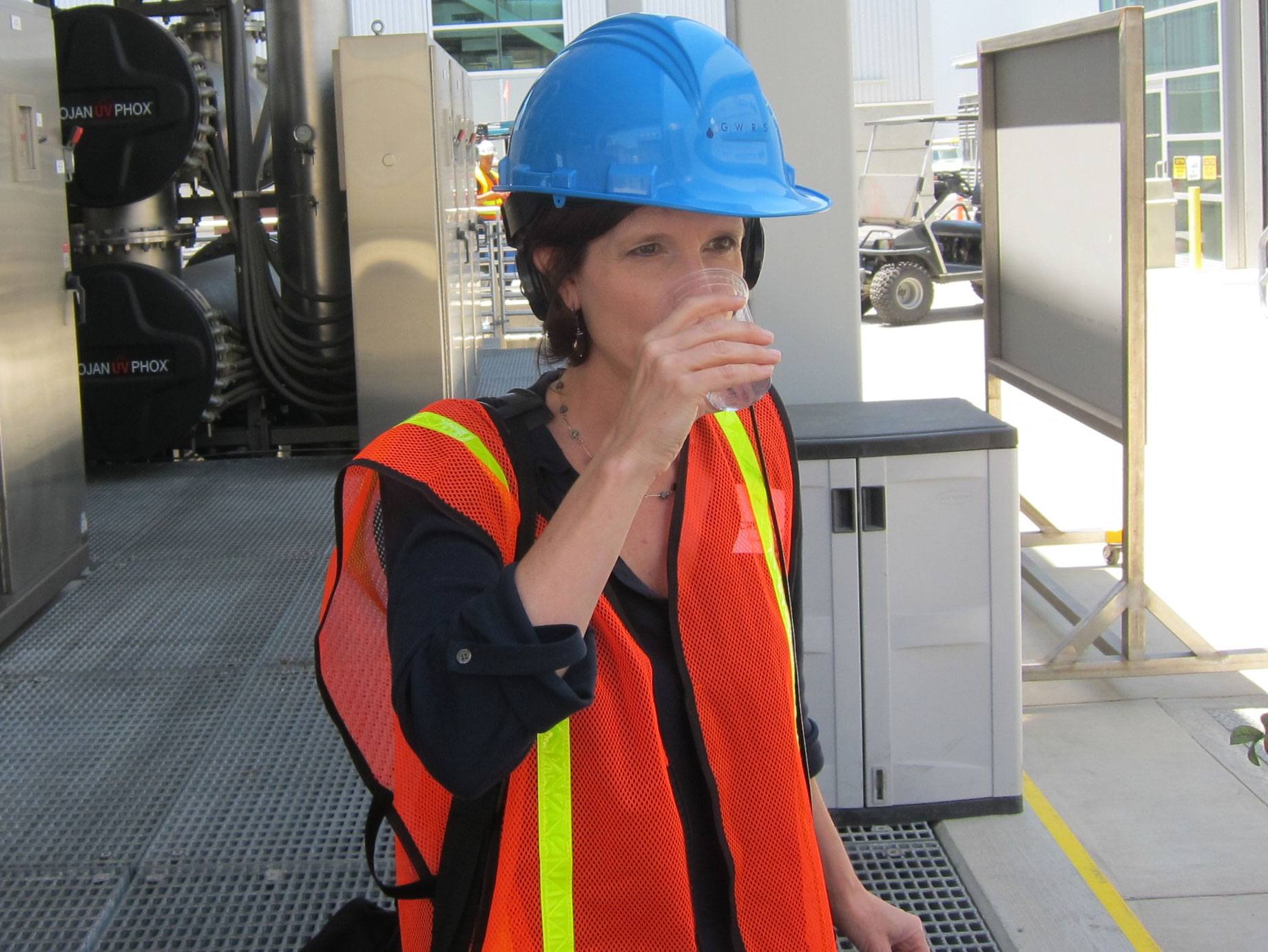 “Now with the drought, cost doesn’t even matter hardly,” says Markus. “We need the water, we need sources of water, it makes all the more sense and that’s why we’re seeing more and more of these projects.”

The plant might not have been built – at least as easily- without grants from both the state and the federal government. Environmental advocates say it might take government investment up front. But in the long run, they say the state will be better off.  The groundwater replenishment system in Orange County is currently planning a $140 million expansion that will allow it to recycle 30 million more gallons of water a day by 2015.