This is the final report in our three-part series on California’s June gubernatorial primary.

PART 1: Kashkari Versus Donnelly - Who Will FaceBrown In The Race For Governor?

California Governor Jerry Brown may be a near-lock to win a record fourth term this fall, but that doesn’t mean he’s universally popular with his fellow Democrats.  There’s growing frustration among progressives over what they see as the governor’s fiscal conservatism and business-friendly views.

“We’re going to say something very symbolic to our governor right now," shouts a rally leader in front of the Capitol.

Ah yes, symbolism. Jerry Brown loves it – at his January State of the State address, he passed out playing cards with his dog Sutter saying “Bark if you don’t like deficits.”

At a recent Capitol rally, a coalition of progressive groups had its own symbolic gesture for the governor, who wants to set aside California’s revenue surge in a rainy day fund.

“It’s raining now” is the response from liberals inside and outside the Capitol when confronted with Brown’s budget proposals this year – particularly his efforts to create a rainy day fund, hold a tight line on new spending and pay down debt.

“I don’t like it, period," says Katheryn McMichael-Scott, came up to the Capitol from Oakland. "And I don’t like what he’s doing to the seniors. Because we’re losing a lot of things that we need.”

From CalWORKs to early childhood education, child care to in-home care, the governor has opposed restoring money to “safety net” programs that took deep cuts during the recession.

“Lot of ideas around Sacramento – and throughout the Assembly and Senate, all throughout the state – to do things," Brown said as he released his updated budget proposal at the Capitol Tuesday. "Well, we have to recognize, we’ve done a lot already and we haven’t paid for all we’ve already done.”

“I think there is a level of frustration,” says California Federation of Teachers President Joshua Pechthalt. “While we’re not in opposition to (a rainy day fund), you can’t just put money aside for that, to the exclusion of restoring programs that really benefit the neediest Californians.”

Many Democratic lawmakers agree.  “It is raining cats and dogs for so many who have seen services upon which they and their families depend for their very existence today,” says Senate Budget Committee Chair Mark Leno.

But it’s not just Brown’s budgets that have provoked progressives.  He's been dogged all year by anti-fracking protesters.

Protesters even interrupted his speech at the California Democratic Party convention. He’s also worked to streamline the California Environmental Quality Act to speed up certain development projects. Many environmentalists are not pleased.

“Their view about Jerry Brown is less enthusiastic than it used to be. That being said, I don’t think any of them would think to vote for the people that are running against him this round,” says the Sierra Club’s Kathryn Phillips.

See, as much as progressives might be frustrated with the governor, it’s not like he faces any political risk. He’s widely expected to win re-election this fall. So the question for liberals is how to respond.

Labor leader Willie Pelote says Brown clearly deserves another term, but “there are things that maybe the governor will push back on, and we will push back as well, that we feel very strongly that the administration and legislature should embrace now. And when that time happens and governor is not willing to work with us on it, we will fight.”

“I probably would step away from even identifying myself as any political party," Alcaraz says. "Jerry Brown promised to be a Democrat, yet he’s running on Republican, conservative values.”

Brown has famously compared governing to paddling a canoe: a little to the left, then a little to the right. That philosophy is why he’s heavily favored to win a record fourth term this fall. But some Californians on the left bank of the river believe their Democratic governor is too far off shore. 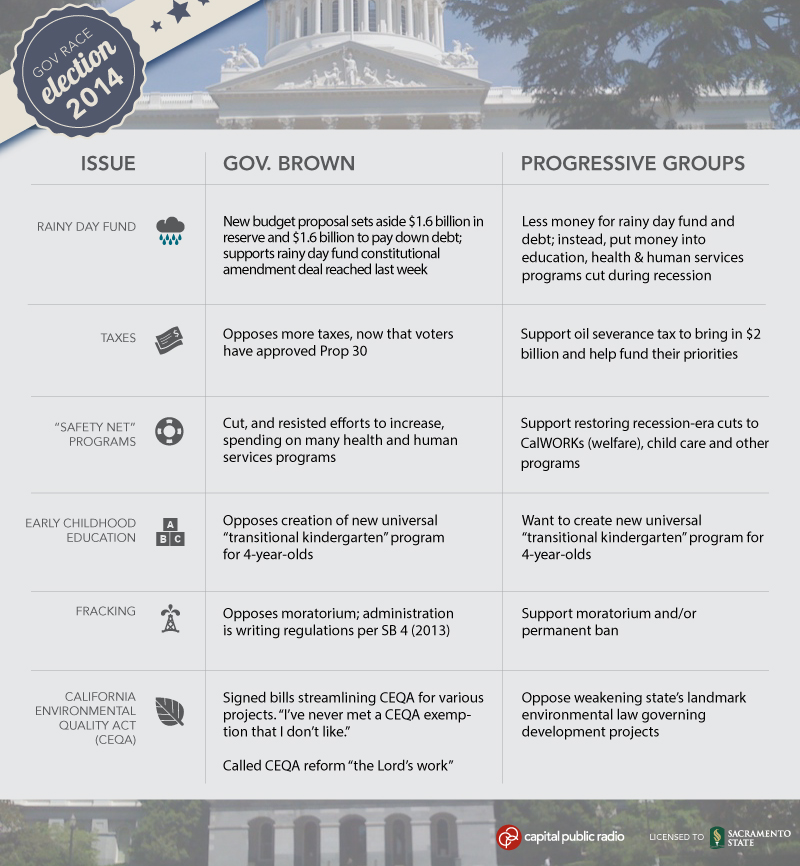