( AP) 11:30 p.m. - Northern California has been drenched and wind-whipped by a day of unpredictable weather that saw thunderstorms and even reports of possible tornadoes but no reports of major damage.

The National Weather Service says Wednesday morning commuters got drenched by fierce on- and off showers from Sacramento through the Bay Area and the Central Valley but most rain totals were below an inch.

Tornado warnings were up in some areas of Placer and Glenn counties north of Sacramento, and reports of funnel clouds. But the warnings expired Wednesday night.

Forecasters say showers are possible through the weekend, tapering off Sunday. Most areas will see a quarter to an inch of rain, and the Sierras could get 1 to 2 feet of weekend snow.

---
As of 6:20 P.M. warners were issued for Sutter, Placer, Sacramento, Butte and Glenn Counties, until 7:00 P.M.
NWS is advising residents of Loomis, Roseville and Lincoln to stay inside, and find shelter under sturdy furniture.
During a tornado it's important to stay away from windows and take shelter in the center of the house. The CDC has information about what do to during a tornado here. 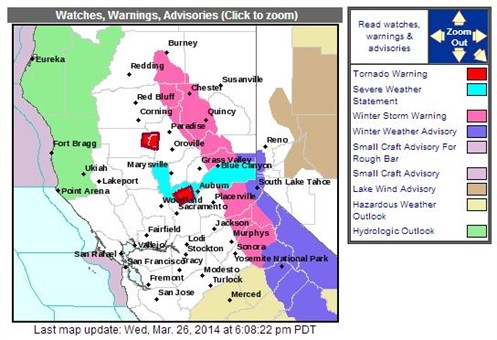 Minutes ago. Moving away from airport & toward Roseville. MT @2be2learn: Shape shifting near Sacramento airport pic.twitter.com/UHFxIgRXtb

Strong storm along I-80 near Citrus Heights and another one in Roseville. Heavy rain, small hail along with dangerous lightning #cawx