That’s the right, For Inspiration and Recognition of Science and Technology (FIRST) Robotics Competition Sacramento Regional is taking place this weekend. 55 teams from around the state gather to prove they had the engineering prowess to be called champions of robotics.

Each teams had six weeks to build a robot. Some teams are part of classes within high schools, some are purely extracurricular, some are a combination of different schools; but all come with a single purpose – to score more points and win.

Team 1678, The Citrus Circuits, from Davis is headed to nationals this year and consistently earns top rankings at competitions. Prior to Friday morning, they were on a 20-match winning streak – but during a particularly violent bout a rival bot rammed into their robot, Beca, damaging it and causing them to lose the match. 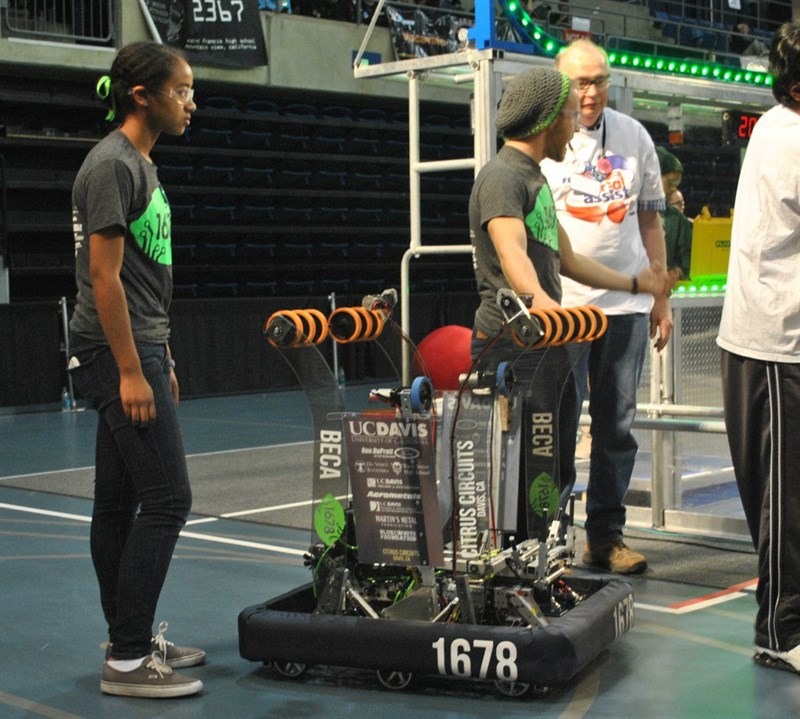 While he was disappointed about the loss, Wershing said the team stays competitive by constantly changing and improving.

“Our success comes from a constant need to improve,” Wershing said. “Yesterday we tore it down and rebuilt it.”

There are about 50 people on the team and Beca cost more than $10,000 to build. Unlike most of the other robots at the competition, Beca can pick up the balls from front or behind, giving the team a huge competitive advantage. It doesn't hurt that they have a pretty accurate short-shot.

Here's a video of Beca competeing this weekend.

The Name Of The Game Is "Aerial Assist"

Here's how the game is played.

Each match features six robots; three on the blue alliance and three on the red alliance. The individual robot teams may have never played together, so before the match the team captains talk strategy.

Alliances can also get points for assists, this is when the robots work together to move the ball down the court.

Each match is 2.5 minutes. The match begins with a 10-second autonomous period where the robots operate without a driver. Each robot may begin with a ball and try to score.

Want to Get Girls In STEM? Let Them Build Robots

Tom Dewey is the co-captain of Team 692, the Fembots, a team comprised entirely of ladies from St. Francis High School in Sacramento, an all-girls school.

Dewey says FIRST is really supportive of women in the science, technology, engineering and math fields.

Dewey, a senior, said she got into robotics because she was looking for something competitive. She used to play basketball, but didn’t make the high school team.

“I like to build things,” Dewey said. “Robotics is the perfect combination of the excitement of the sporting world and the technical aspect of creating something functional.”

The Fembot’s robot is named Murphy, after the law.

“Anything that can go wrong will – and has,” Dewey said. “But we’ve been able to fix it.”

Murphy consists of a catapult style ball shooter, a roller system to pull the ball into the robot, a piston to eject the ball so the robot can pass to allies on the court and a two-speed transmission.

“We can go fast and we can go slow,” Dewey explained.

The competition continues through Saturday afternoon. Wrapping up with the final rounds at 1:30 p.m. in the UC Davis Pavilion. It's free for the public, although parking is $8.