From Stockton To Niners' Games, Fans Can Now Catch The Train

San Francisco Forty-niners' fans from the San Joaquin Valley going to NFL games this coming season might be able to avoid the long drive and the cost of parking at the team's new stadium.

Altamont Commuter Express or ACE carries 45-hundred commuters a day by train from Stockton and the valley to jobs in the East Bay.

Now ACE is negotiating with the 49ers on a plan to take fans from Central Valley locations and leave them right in front of the stadium.

Thomas Reeves with ACE says the train would pick up passengers in Stockton, Manteca, Tracy, and several East Bay stops.

"We're looking at a capacity of somewhere between 700 and 800 folks, there are thousands of 49er fans from the San Joaquin Valley and even the East Bay so we feel it's a perfect opportunity for those who want to go to the game," Reeves says.

Reeves estimates round trip fares would run between 13 and 20 dollars, far below the cost of gas and parking.

The trip by train takes about two hours now, but ACE is working on track upgrades that will reduce the time to 90 minutes in a few years. 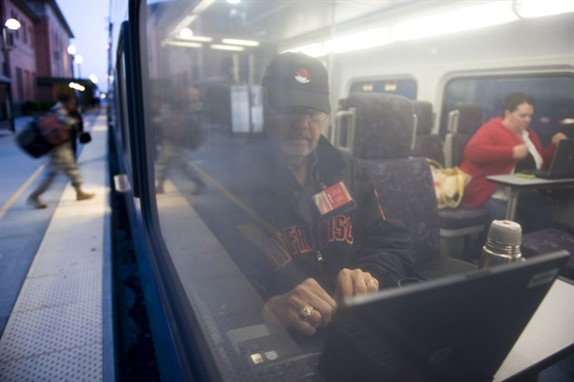 An ACE passenger works on his laptop waiting for the train to depart. Rich Ibarra / Capital Public Radio