Near Newman, California fish biologists with the US Bureau of Reclamation stepped into the cold waters of the San Joaquin River, California's second largest river. They're near the river's confluence with the Merced River.

The biologists are checking nets they’ve placed in the river for salmon.

“Oh we do have a salmon in the net,” says Hueth.

It’s near the end of the season for fall-run Chinook, so they catch just two. Salmon sometimes manage to make it through a fish barrier here. If they do, Hueth says they face a certain death.

“There’s a section in the middle that’s dry so the salmon can’t make it up that far."

Biologists tag and measure the salmon. Because the river runs dry, they truck the salmon upstream and release them near Fresno.

Before the Friant Dam was built in the 1940's, tens of thousands of salmon spawned in the San Joaquin. But the dam and years of irrigation diversion dried up a 60-mile stretch of the river. Historic salmon runs disappeared.

The goal of the San Joaquin River Restoration Program is to bring back the river and the fish. It’s the result of a 2006 legal settlement involving environmentalists, the Bureau of Reclamation, and farmers who get their water from the Friant operation.

This January is the deadline for the program to restore enough water to the San Joaquin to eventually allow runs of Chinook salmon.

“What we’re taking on is quite a substantial effort. It is probably the largest restoration project in California, and probably one of the largest in US history,” says Monty Schmitt, a scientist with the Natural Resources Defense Council.

No one expected immediate results. But after eight years and $100 million dollars, the river still runs dry. Major channel improvements including fish screens were supposed to be completed by the end of 2013.

“They haven’t turned one shovel of dirt on this entire system,” says Cannon Michael. He stands in front of a dry river channel that is choked with shrubs and trees near his land. It's part of a 60-mile stretch of the San Joaquin that went dry from the Friant Dam and years of irrigation diversion.

“So there’s nothing that’s been started physically. We are saying now you’re missing your own deadlines, let’s figure out some other kind of a plan that makes sense for everybody,” says Michael.

Michael and his father-in-law Jim Nickel farm near the river. Nickel’s farmland was damaged when the restoration program released test flows down the old channel in 2009. Groundwater seeped into his crops. 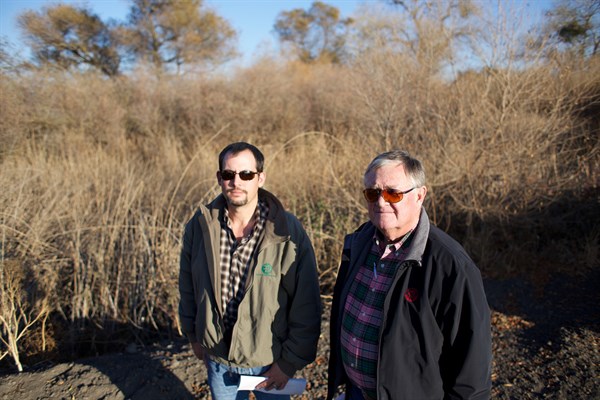 “Yes that was the mighty San Joaquin river. It’s sad, but let’s be realistic you can’t replace some things. You can’t go back. There’s a money issue. It’s just a reality issue, it just doesn’t work,” says Nickel.

“It’s costing me probably $100,000 a year just for personnel, engineers, attorneys. That’s what it cost me. We go to meetings once or twice a month. It was more than that and we spend all this time,” says Nickel.

The Bureau of Reclamation did reimburse Nickel for the damages.

Alicia Forsythe, Program Manager for the restoration program, says many of the delays were unavoidable. The recession hit just as the project was beginning. Water seepage stalled projects. The land is sinking in an area where a new fish screen is needed.

“The settlement assumed that those projects would begin immediately, that there would be willing access from all landowners. That basically everything would fall perfectly in line for these projects," says Forsythe. "We find that that’s just not reality.”

The problems and delays have escalated costs. The program’s original estimate was between $250 million to $800 million. Now Forsythe says it’s closer to a billion. She says the schedule for the projects will be revised again, based on priority and what she calls more realistic funding.

Scott West says it may be a frustrating wait, but it’s worth it. He’s president of Fresno Fly Fishers for Conservation. Despite that title, he says being able to fish for salmon once again in the San Joaquin isn’t his primary desire.

“I don’t believe in giving up on that river,"says West. "I’d like to see us fix a past wrong.”

The Bureau of Reclamation is hopeful that the San Joaquin River will be reconnected in 2014.

Barriers would still prevent adult salmon from making it up and down the river. But for the first time in 60 years, endangered spring-run Chinook salmon will be reintroduced into the river.