Bringing Back The White Abalone

If you live in California you’re probably familiar with abalone. The sea snails native habitat is along the California coast.

For decades abalone fishermen have flocked to the shore to catch them. One abalone species has suffered the consequences of its tasty meat more than most.

The white abalone is endangered almost to the point of extinction. But UC Davis scientists think they’ve set the mood for its recovery.

Kristin Aquilino with the UC Davis Bodega Marine Laboratory dips her hand in a fish tank.

“Alright I’m going to pull out this pipe here and show you some of these juveniles,” says Aquilino, who heads the white abalone captive breeding program.

She often talks like a proud mother when she points to the tiny creatures.

“Awhh, right?" she coos. "These turned one on June 14th of this year. So they're just over a year old,” says Aquilino, as she shows off the juvenile white abalone. 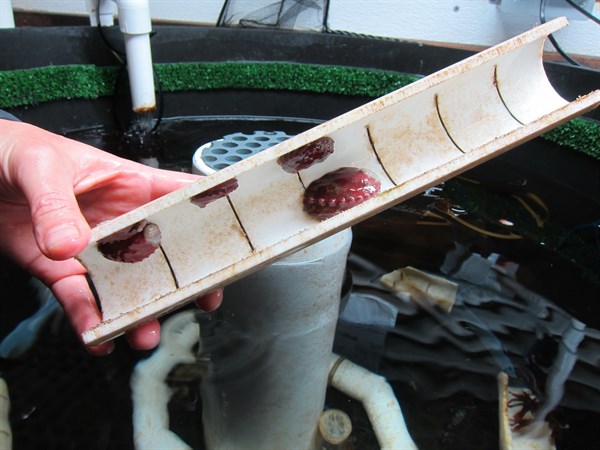 Juvenile white abalone cling to a piece of pipe in Bodega Marine Laboratory.

Cute, but they are sea snails, so why, exactly, should anyone care?

“So right now the population is in really really bad shape," says Aquilino. "There are only a few thousand left in the wild. The animals that are left in the wild are so far apart from one another that they are effectively sterile, and so this population might already be extinct in the sense that it’s not currently reproducing on its own.”

Because white abalone are broadcast spawners, males and females have to be in close proximity for a sperm to find an egg. 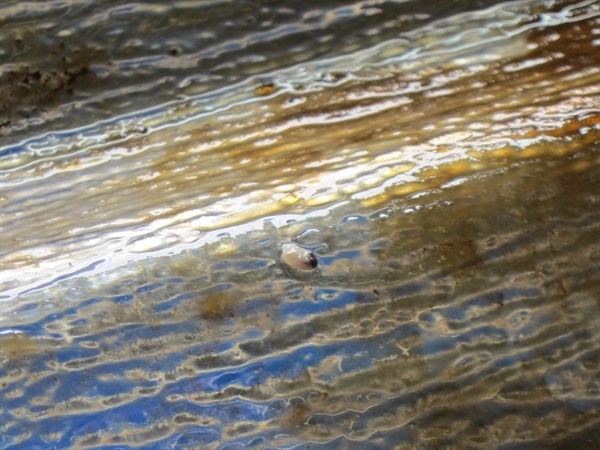 That speck, about the size of a grain of rice, is a baby white abalone.

“We used to think of abalone as being this animal that you could never, never deplete," says Melissa Neuman with the National Marine Fisheries Service.

But she says scientists had it all wrong about the animal.  They thought abalone acted like other shelled organisms, living relatively short lives and reproducing often.

“That’s why fishing for them went on for as long as it did without us pulling the plug on it,” says Neuman.

She says abalone are delicate little creatures. "Abalone behave more like a mammal," says Neuman. "They live to be 30, they’re not reproductive until they’re more like 5 to 8- years-old and they’re only producing offspring maybe once a decade successfully."

So researchers had a big job, get the animals to breed in captivity.

That hadn’t happened with a white abalone in nearly a decade. To do so, Kristin Aquilino has to get up close and personal with them.

“We can tell the sex by looking at their gonad. Let’s see if this one wants to show it."

"This may not be appropriate for radio," she says. 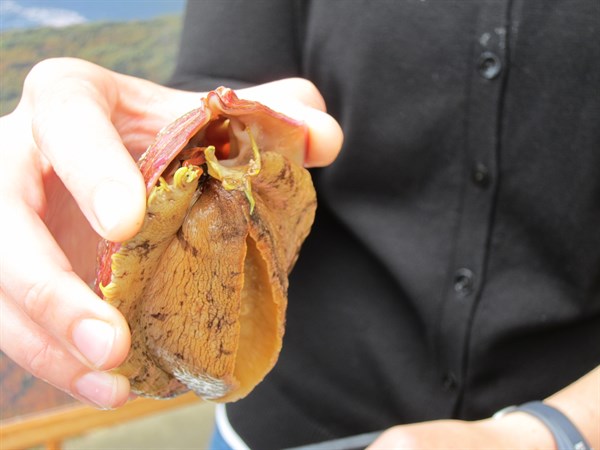 Aquilino then points to dark tanks that house two white abalone. She says this is where the mood is set. 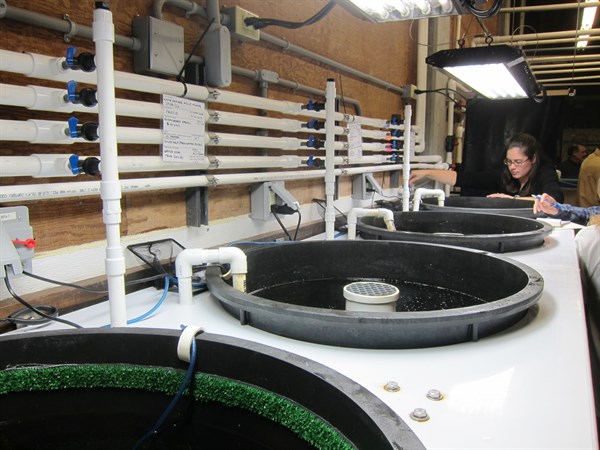 "We have lighting that is attached to an astronomical clock that has lights that come on and off the same time the sun rises and sets in the abalone’s native range in southern california," says Aquilino. "We have the temperature manipulated. We feed them lots of algae. We sometimes play some Barry White."

She mentions the song "My First, My Last, My Everything."

Aquilino is quick to point out that the Barry White music is not scientific. But after much trial and error, came success.

"We were ecstatic. In our care was a very small but important ray of hope for this entire species," says Aquilino. 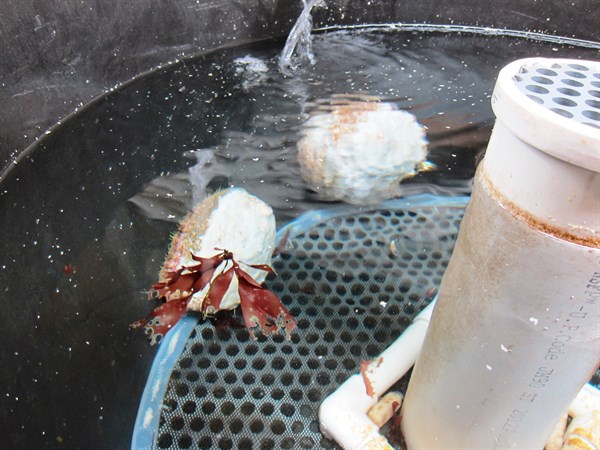 It’s still a long road ahead. Abalone females can produce millions of eggs, but only 1-percent survive to become juveniles.

And in captivity, getting white abalone to become reproductive every year is more difficult than with their more abundant cousin, the red abalone.

Aquilino says their research began using what they learned from red abalone farms in California.

"We start using their best techniques and then fiddling with them to try to make it right for the white abalone," she says. "It’s definitely possible that a lot of the work we’re doing here could be applicable to red abalone farms and could help them increase production or reduce costs.

Ultimately the goal is to one day repopulate the oceans with white abalone.

Scientists say it will take several decades if not longer. But at least they’ll have Barry White to listen to.