One Dead, Several Injured After Tree Falls on Youth Camp Near Yosemite

The person killed was identified as a camp staff member.  Four people –all adults- were taken to hospitals in Modesto and Sonora.

None of the children were hurt.

A statement released by the camp this afternoon says the four injured people are doing well and that camp activities have resumed.

The tree hit a PG&E power line and knocked out power to the camp.  Generators were deployed while repairs were being made. Emergency responders arrived within minutes, coming from Yosemite, Cal Fire, U.S. Forest Service, Tuolumne County Sheriff’s Office, and the Office of Emergency Services.

The camp is asking parents to avoid calling or emailing their children as camp staff deal with any emotional effects the accident may have left.

The letter was posted on the Tawonga Facebook page.

"Annais Rittenberg, a beloved member of the Camp Tawonga staff, died this morning when a tree spontaneously fell at the campfire circle outside of the dining hall. Four other adult staff were injured and taken to local hospitals and are all doing well:  Lizzie Moore, Cara Sheedy, Juliet Ulibarri, and Anya Schultz. All of their families have been contacted. The campers were inside the Dining Hall having breakfast when the incident occurred and no child was injured.  Emergency responders arrived within minutes, coming from Yosemite, Cal Fire, U.S. Forest Service, Tuolumne County Sheriff’s Office, and the Office of Emergency Services. Camp Director Jamie Simon immediately engaged our own Incident Command System to ensure that our children and staff remain safe, both physically and emotionally.  The campers are doing well and are participating in camp activities away from the scene. Our on-site staff therapists are working closely with First Responder grief experts to help care for our community in this difficult time. Part of the falling tree struck a PG&E power line, temporarily interrupting some of our electrical service.  Repairs are currently underway and our generators are providing all necessary power. This information has been verified by the Tuolumne County Sheriff’s Office.  You may hear other reports, by media or rumor, but rest assured that this is a true and accurate report. We will send you an email update by 6:00 PM this evening with further information.  Please help us continue to remain focused on the children by not calling or emailing us at this time." Sincerely, Ken Kramarz Executive Director

An update from the Tuolumne County Sheriff's Department: "Tuolumne County dispatch received calls from Camp Tawonga reporting a fallen tree with approximately three injured victims. Emergency personnel responded and found four adult staff members who were injured and taken to area hospitals.  No children were injured and all are accounted for.

There is one adult staff member who is unaccounted for. Additional  information will be forthcoming."

The Tuolomne County Sheriffs department says there may be some people trapped under the tree. Daniel Berlant with Cal Fire says a large number of emergency personnel responded.

The Los Angeles Times is reporting that one person has died, and four others airlifted to a Sonora hospital.

Cal Fire says the incident happened at Camp Tawonga, a 160-acre Jewish youth camp set in the middle fork of the Tuolmne River in the Stanislaus National Forest, near Yosemite National Park. There are about 160 employees who work in the camp’s summer program, according to the camp’s website. 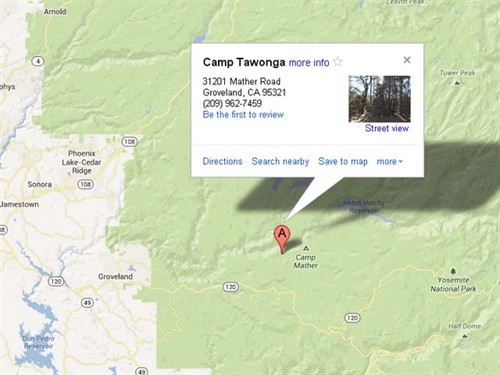