These awards—and the content of the work they honor—speak to the talent and versatility of CapRadio’s news team and the innovative nature of our newsroom. CapRadio is working across platforms to bring meaningful reporting to all our audiences, merging the depth of coverage that exemplifies the best in public radio with a deep commitment to finding the best way to tell each story.

“The strength, depth and adaptability of our news department show that radio—public radio—is proving to be the place where cross-platform news thrives,” says Linnea Edmeier, Capital Public Radio’s Managing Editor for News and Information. “The boldness of our organization shows in the measured risks it takes, supporting this team as it enterprises beyond traditional comfort zones. I’m thrilled when it leads to recognition from our peers.” 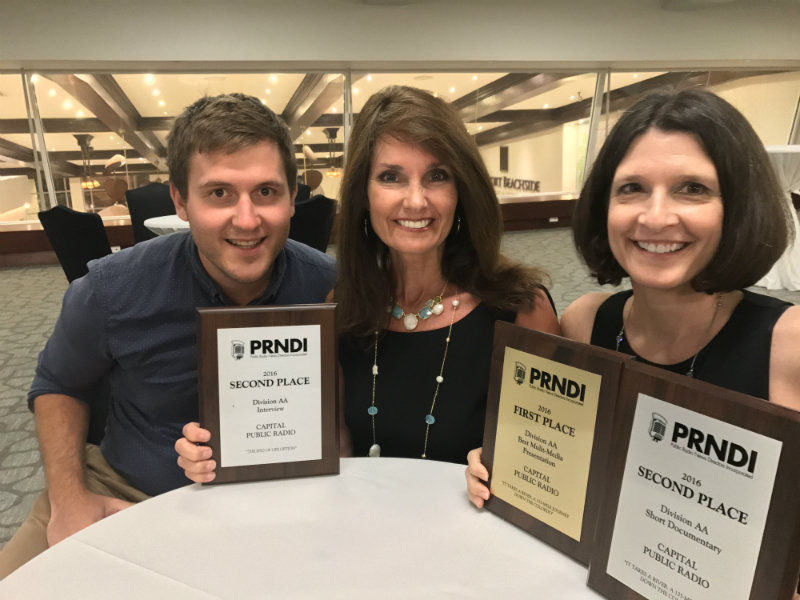 Environment Reporter Amy Quinton, Senior Producer Catherine Stifter, and Digital Editor Marnette Federis were recognized with awards for their work on It Takes A River, a multimedia documentary that takes the audience along on a 135-mile trip down the Colorado River. The story won second place in the Short Documentary category, and first place for Best Multimedia Presentation.

Quinton says she is grateful to have had the opportunity to report It Takes A River. The project took her out in the field for 10 consecutive days, floating on a raft and hiking through narrow canyons to come back with a story rich in substance and detail. The final documentary and web story required months to produce. Quinton says it represents the kind of long-form reporting public radio does best, and the reason she chose this career.

“I am particularly humbled to be recognized by my peers in public radio,” Quinton says. “It’s a great honor.”

Marnette Federis designed and brought to life the online presentation for It Takes A River, which includes photos, video and audio elements, and a scalable map that allows readers to follow along on the 135-mile stretch of river. Catherine Stifter edited both the audio feature and the online story.

Insight Host Beth Ruyak, Senior Producer Jen Picard and the rest of the Insight team were honored with second place in the interview category for Choosing The End Of Life Option, a deeply personal and emotional set of conversations that explores California’s aid-in-dying law from the perspective of terminally ill patients and their family members.

“This is an excellent example of the work Insight strives to do on a daily basis,” Picard says, “giving a human voice to a national issue that affects every single listener.”

The special segment features a conversation with Carol Yeates, a terminally ill woman who had chosen to take life-ending medication, and who passed away before the segment aired.

“Carol had a message about living and dying that she wanted to deliver,” Ruyak says, “and I’m convinced that because we approached her with no fear and no agenda, we could take that message in and allow it to stand on its own.”

The first conversation with Yeates was just weeks before she ended her life. Ruyak also spoke with Yeates’s family members, and with Tim Herring, whose wife Sue Herring took the aid-in-dying medication in 2016. Ruyak says the power of this work is testament to the strength of the Insight team.

“No single member of our team could have told this story as carefully as it needed to be told,” Ruyak says, “but the skills and sensitivities we had together really mattered.”

While each of these awards honor specific members of our newsroom, they also speak to the strength of the organization in fostering award-winning reporting initiatives. CapRadio is committed to supporting its talented reporters and staff with the resources they need to shine—and to shine light on stories that matter.