Listen
/
Update RequiredTo play audio, update browser or Flash plugin.
The year 2009 marked the first time a giant Boeing 747 dropped a load of bright pink retardant on a fire in California. At the time, the drop was hailed by some as the start of a new type of air war on fires. But the 747 is not currently an option for fighting fires in the state.

CAL FIRE says the company that owned that 747, Evergreen International Aviation, went out of business three years ago and CAL FIRE's access to the plane went with it.

Janet Upton is a CAL FIRE Deputy Director. She says another company called Global SuperTanker has approached the agency with a proposal to supply one of the giant planes. The company has not received federal approval to fight fires.

"We do have a copy of what is called a 'call-when-needed' agreement and it's pending two items, which is the insurance certificate and the Interagency Air Tanker Board certificate," Upton says. "Once that is compiled, we are eager to take them out and test them in battlefield conditions and see how effective they can be."

CAL FIRE and Global SuperTanker say it has taken longer than usual for the 747 to be certified.

Jim Wheeler is the President and CEO of the company. He says he has been trying to convince the Interagency Air Tanker Board to change the maximum tanker load on a bomber from 5,000 gallons of retardant to 20,000 gallons.

"They'll say, well it's cheaper or they're faster or they're better, whatever," Wheeler says. "I'll tell you this. If you put two of those airplanes out there in the 5,000 gallon range, that's going to cost as much as one of our airplanes and you're going to only get one-third of the load."

Wheeler says concerns about the plane's ability to fly over fires in hilly areas are without merit. He says the 747-400 has dropped retardant on fires from the Andes Mountains to Israel.

How Much Will California’s EDD Scandal Cost Newsom In The Recall Election? 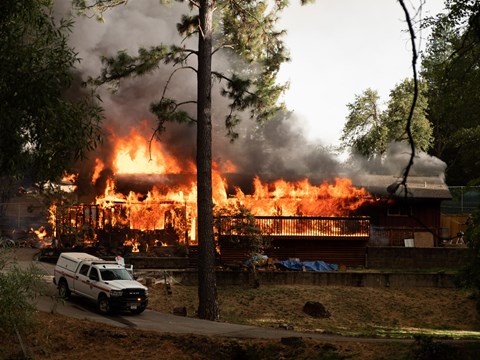