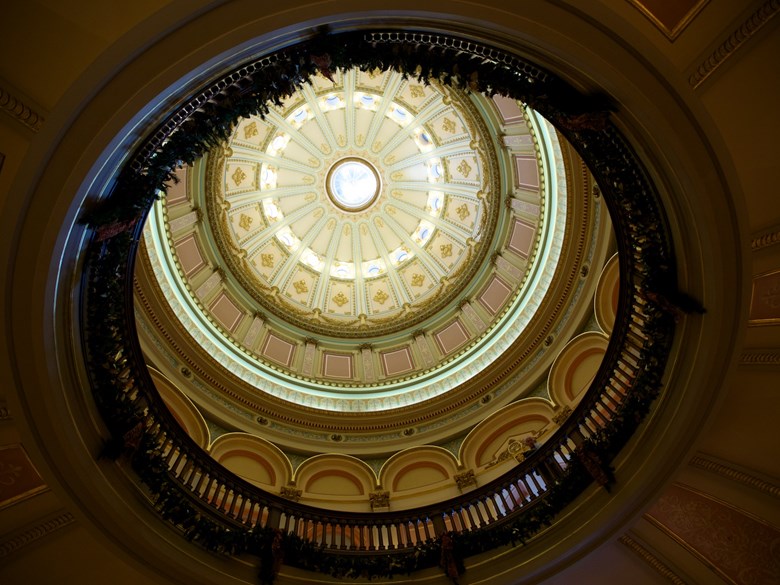 Carolers and choral groups are filling the California State Capitol with holiday music this year.

More than 40 musical and theater groups are scheduled to perform this year in the rotunda.  Each group comes with its own set of holiday or religious favorites.

"During the Renaissance, all of this music would have been composed in a polyphonic style. So, kind of like a canon or a round, where one voice leads and then other voices follow. So, that's kind of the idea ...kind of a puzzle just to sing it."

The choir sings along with an organ that Lovallo built.

Other groups are accompanied by different instruments. Rick Maness plays guitar as he leads  the CalPERS Holiday Chorus. The play list includes hymns and modern favorites.

"I love the music, first of all and I love the smile on people's faces when we do some of the rockin' and rollin', we just have so much fun with it."

This is the 19th year the State Parks Department has staged the series in the Capitol Rotunda. Kurt Malchow works downtown and says he has been attending since 2003.

"Just to hear the music. It's wonderful in here. The echo effect of the dome is great acoustics for live music."

His favorite group, the Valley Harp Circle, plays Friday. The series lasts through next Wednesday the 23rd.

Right now, the music can only be heard on the Capitol's west end. The Parks Department says next year it hopes to pipe the music into the Capitol's east annex so employees there can listen while they work.