As Beth and Brian Renken loaded up 15 red hens into the back of their pickup truck during a recent chicken adoption event, they mulled over one dilemma – how to tell them all apart.

“They all look alike, usually we have our chickens that are different breeds, and then I can name them,” said Beth Renken. “So this is going to be a challenge to figure out who's who.”

When most people think about getting an animal companion, chickens might not be the first on the list. But those who keep them as pets say the rewards are endless.

“They're really quite fun and they're quite trainable, they follow you around, they sit on your lap” said Beth Renken, whose family lives in a rural area of Auburn.

The Renkens were among the hundreds of people who applied to adopt more than 1,000 hens in the process of being rescued from a Chico egg farm that is going out of business.

Staffers with Animal Place, the Grass Valley-based rescue group organizing the adoption, said without the rescue and people who are willing to adopt the hens, the birds would be killed. 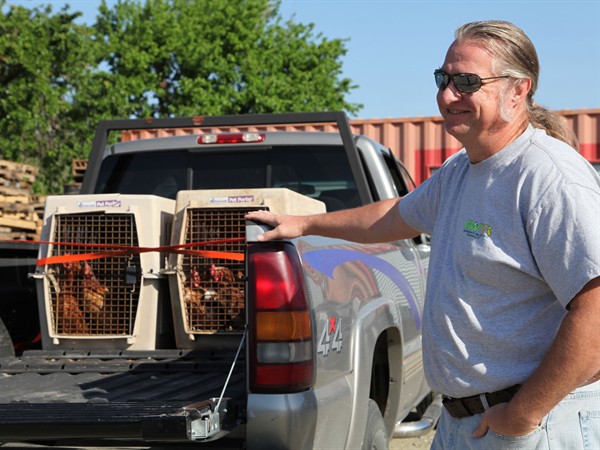 So far, the group has seen a big demand for the hens. During this particular rescue, Animal Place received twice as many application forms in two weeks compared to the usual, said Adoption Coordinator Jacie Volek.

Animal Place is holding more adoption events in the coming weeks. But with so many applicants, the birds have all been placed. Animal Place encourages those who want to adopt to apply for future rescues.

But there are restrictions. Those adopting must make sure they live in an area that allows them to keep poultry. They must have proper housing for the hens, such as a coop or hutch. Adopters must be willing to keep the chickens for their whole lifespan and they can’t be slaughtered or used for commercial purposes.

Owners who have taken in chickens from previous rescues were among the first in line to get the Chico hens.

“It's a nice thing to do for these chickens that weren't given a very good lot, if we can let them live out their lives in a more comfortable place, with room to spread their wings, the better,” said Paul Schelin, of Cameron Park.

Schelin and his wife Christine previously adopted with Animal Place after the group participated in the largest farmed animal rescue in California last year. It involved a Turlock poultry farm that abandoned 50,000 hens and left nearly 20,000 to starve to death.  25,000 more were euthanized and the remaining 5,000 were rescued and adopted out.

The Schelins said one of the chickens they adopted from that rescue was ill and eventually died. They said it’s important for people potentially wanting to adopt to do the research and go into the process with open eyes and that the birds may not live as long as one would like.

“A rescue hen, healthwise, may not be so robust,” said Christine Schelin. “[But] I think it's the most awesome experience to help a living creature, it lifts your own heart.” 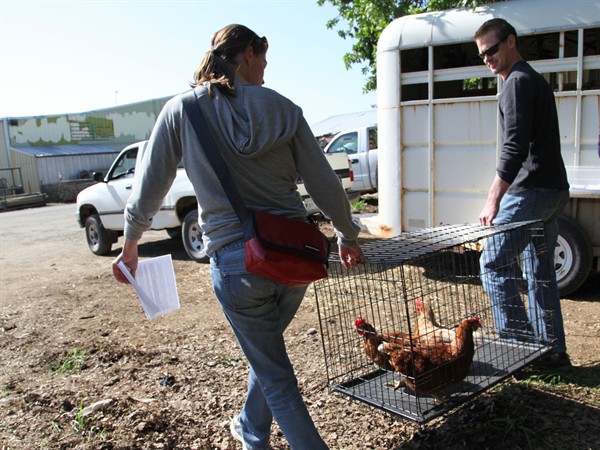 Raising backyard poultry, along with the urban farming movement, has gained popularity over the years. In 2011, the city of Sacramento passed an ordinance, allowing for three hens per household in a residential neighborhood.

City laws also require that coops be permitted at $15 a year and that each hen be licensed for $10 a year.

Animal Care Services Manager Gina Knepp said the city handed out 142 coop permits and 445 hen licenses between 2012 and 2013. But she said the number of chickens within city limits is probably higher because most people do not get licenses.

Part of the problem, Knepp said, is that the city does not make it very easy to pay the fees. She said Sacramento is working to upgrade its system so people can do the transaction online.

Knepp said there are pockets in Sacramento where abandoned chickens have caused problems. This usually happens when owners dump their hens if they are past their egg laying years or if a chick, thought to be hen, is actually a rooster.

She said most of the chicken-related calls Animal Care receives  -- 497 complaints in 2013 -- involved noise disturbances or foul odors.

Similar to adopting any animals to be pets, there are certain issues to keep in mind, said Knepp. This includes the fact that chickens can be messy, that they don’t lay eggs for their whole life span and that they sometimes carry diseases.

“[Keeping chickens] is a really cool thing, we just want to make sure that people don’t get in over their heads and that they have the knowledge to keep the animals healthy, so they’re not disturbing others,” Knepp says. 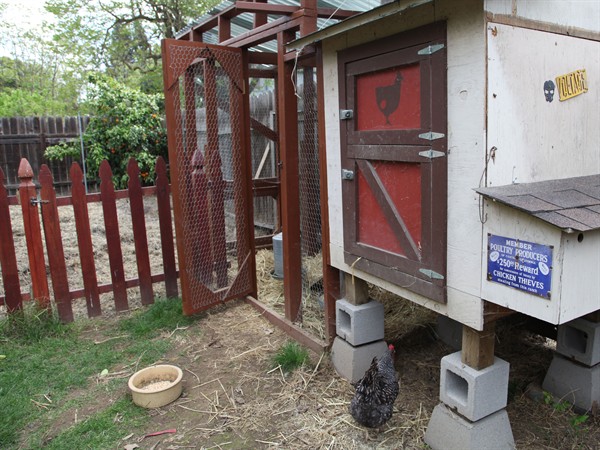 Owners should be also be aware of diseases that could affect their chickens, including Marek's diseases and salmonella. Mites and parasites may cause other issues.

Sarah Stinson is with the California Animal Health and Food Safety Laboratory and has studied the growing popularity of backyard poultry in the state. The laboratory has a Backyard Flock program that encourages owners to get free testing for their chickens postmortem. The study found that the number of owners who submitted their pet chickens for testing increased by more than 300 percent from 2007 to 2012.

Information about testing at California Animal Health and Food Safety

In an urban setting, Stinson said owners need to keep in mind that finding veterinary medicine who is an expert on backyard chickens may be difficult.

"It might be hard to find one who sees chickens on a regular basis, then if you have a sick chicken, what do you do," she said.

For those who showed up at the Animal Place’s adoption event, the benefits of having domesticated fowl outweigh any hardships.

Owners are quick to list the reasons why they like keeping a flock, including having them as companions and that the birds are useful for keeping bugs away from organic gardens, helping till the soil and providing a supply of fresh eggs.

“We decided we wanted to adopt some needy pets, because chickens are undervalued and they're great pets … and they give you breakfast,” said Diane Jankauskas of Fairfield.

Animal Place Executive Director Kim Sturla said chickens usually get a bad rap and most people see them as clueless or stupid creatures, but owners can easily bond with them. This in turn, can help change attitudes towards farmed animals.

“It’s really interesting to see this growing interest for chickens,” said Sturla, with Animal Place.  “Granted some people raise them to slaughter and eat them, but the vast majority is backyard chicken enthusiasts. They say one of the most enjoyable activities is to sit on the back porch and watch their hens, scratching around in the garden …  and you have increased appreciation and in turn respect for them. That’s delightful and enriching for everybody.”