California’s task force on reparations has begun putting dollar figures to potential compensation for the various forms of racial discrimination, generational pain and suffering Black Americans experienced in the state.

The rough estimates by economic consultants may mean that hundreds of thousands of dollars could be due to Black Californians who are descendants of enslaved ancestors. However some politicians on the task force indicated the reparations would be a difficult case to make.

Task force member and state Sen. Steven Bradford, a Democrat representing South Los Angeles, told an audience at public meetings in Los Angeles over the weekend it would be a “major hurdle” to pass any reparations plan in the Legislature.

“For a state that didn’t have slavery, don’t think they’re going to be quick to vote on this final product of this task force,” he said. “We need to stay unified, we need to be together. We aren’t always going to agree, but we have to put forth a unified front.”

Meeting in the California Science Center Friday and Saturday, the nine-member state-appointed group invited a team of economic experts to describe reparation ideas in financial terms. It was the group’s first gathering since June, when the task force released a 500-page report on the state’s history of slavery and racism. 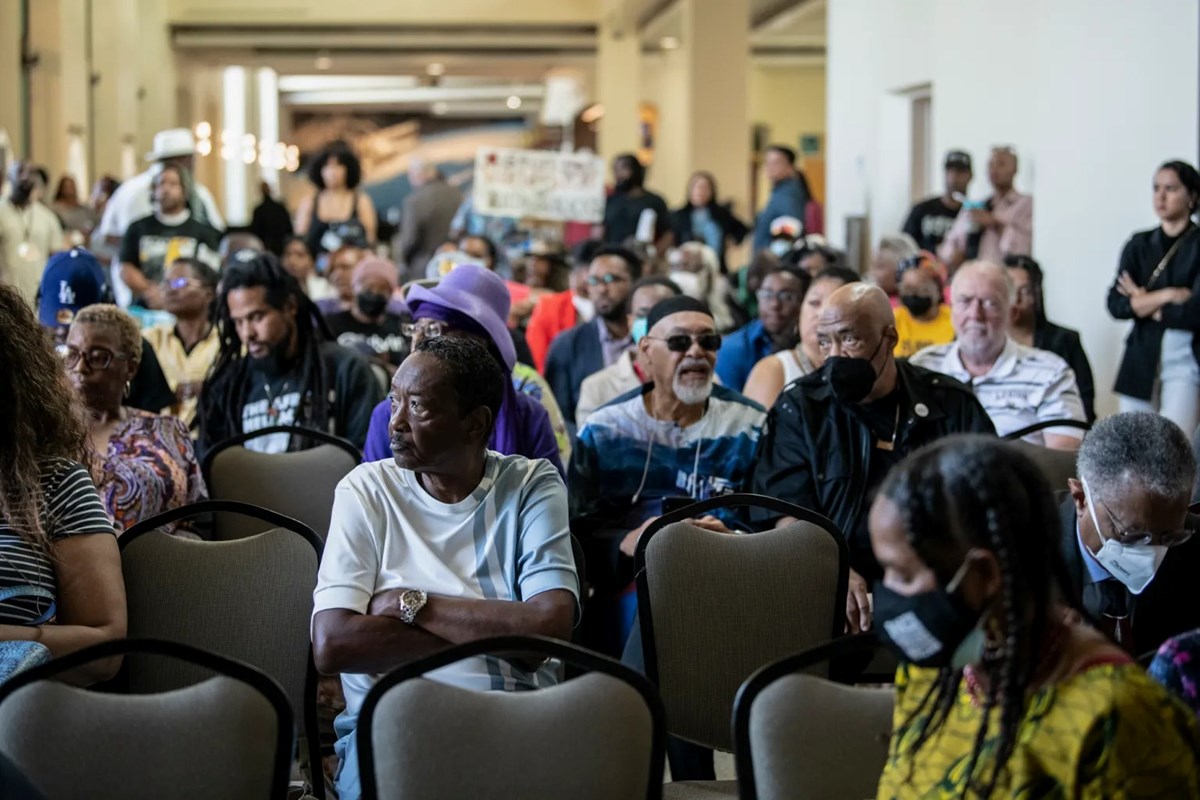 In March the task force voted to recommend to state leaders that if California makes some form of reparations available, they should go to Black Californians who can establish lineage to enslaved ancestors, rather than to those who are more recent immigrants, or descendants of recent immigrants. The reparations could be in the form of cash, grants, tuition assistance, loans or other financial programs, the task force said.

At this meeting, the task force described several scenarios for which Black Californians could receive monetary compensation.

For instance, the task force considered redlining, a practice of denying mortgages to Black homeowners and of devaluing residential property in primarily minority neighborhoods.

The four economic consultants calculated that each Black Californian who lived in the state between 1933 and 1977 experienced a “housing wealth gap” of $223,239, or $5,074 for each year in the period. The experts said that number — which is the difference between the average value of all homes in California and the value of Black-owned homes  — could be considered for reparations.

Such calculations are far from final, the consultants said, and there is no total estimate, though it is based on all 2.5 million Black California residents today, they said. The consultants said they haven’t calculated how many people would qualify for each type of reparation.

For another example of injustice, mass incarceration, the consultants calculated potential income lost by incarcerated Black Californians from 1971, the beginning of then-President Richard Nixon’s announced “War on Drugs,” until today. The economists pointed to many studies showing Black people were incarcerated far beyond their numbers in the general population.

Without discussing guilt or innocence, the economic consultants estimated that incarcerated Black residents were out $124,678, or $2,494 a year, for unpaid prison labor and years of lost income. The consultants mixed into the calculations the average salaries of California state workers and the $15,000 that some Japanese Americans received in reparations after their internment during World War II, from 1942 to 1945.

One of the most pervasive forms of racial injustices Black Californians faced is disproportionate health outcomes. The economic consultants noted that Black Californians have the shortest life expectancy of any racial group at 71 years, which is 7.6 years shorter than whites. Black Californians also faced higher death rates from cancer than other racial groups, and Black mothers were four times more likely to die in childbirth than any other group.

Although there is no actual price tag on a year of life, for statistical purposes some economists use a $10 million valuation for a person’s entire life. This group of economic consultants calculated the dollar amount of the gap in life expectancy for Black Californians to be worth $127,226 per year.

Task force Chairperson Kamilah Moore noted that the list of injustices and “harms” the task force is considering was much longer and has been narrowed down from a dozen last spring to five.

The economic consultants disclosed numerous pages of data analysis they have yet to complete, and they have a November deadline to request more racial and financial data from the state’s Department of Justice to make more accurate calculations.

“After this process is over, we need to get you all a Nobel Peace Prize in economics,” Moore joked.

The task force also has to narrow down how many people would be eligible for payments, the time frame for reparations, and decide how recipients would establish residency in California.

The discussion about reparations hasn’t been just about money. In June, the task force issued a preliminary report that recommended a public, formal apology — in addition to cash payments, free college tuition, and zero-interest housing loans.

Cash payments were the most popular form of reparations suggested during 17 community listening sessions and in 46 testimonies uploaded to a website hosted by UCLA’s Bunche Center think tank, researchers told the task force Friday.

Meanwhile, Gov. Gavin Newsom is considering a bill that would extend the life of the task force. Introduced by Assemblymember and task force member Reggie Jones-Sawyer, Assembly Bill 2296 would let the task force deliberate a third year, to 2024, instead of ending in 2023.

The task force is required to submit its final recommendations to the Legislature in June 2023.

Jones-Sawyer, a Democrat who represents South Los Angeles, told CalMatters he hopes to keep the task force together another year after delivering its report, to leave room for additional hearings and to allow for input from members of the task force who are not legislators.

“This is just so that we as a body can stay united,” he said. “It’s really difficult to get things to the Legislature … so we’re going to need everybody involved to make sure it gets done. The best experts are those people in the room right now. There’s nobody else on the planet right now that knows more about reparations than the nine members of the task force.”

Some audience members, however, said they worried that the bill would delay reparations.

“AB 2296 is a betrayal of Black Americans,” said Tiffany Quarles, a member of the audience. “We’ve been waiting for 400 years. We do not need an extension.” 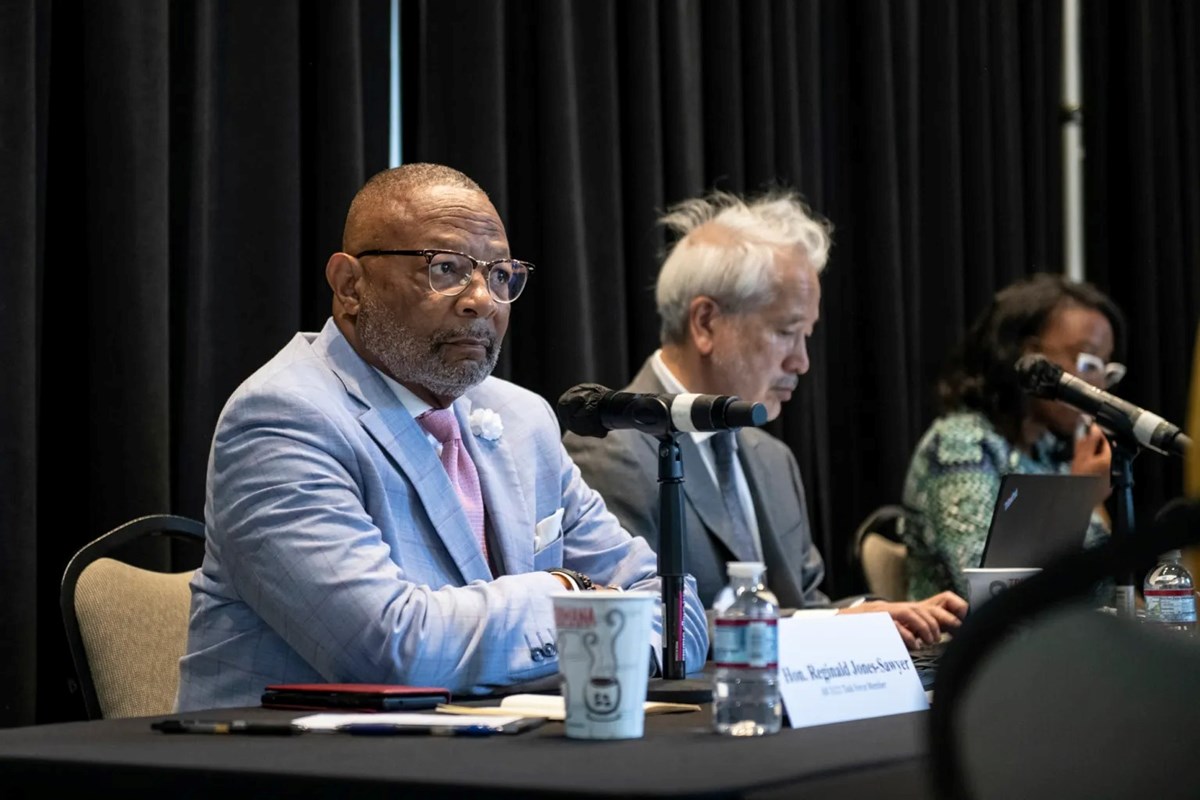 Assemblyman Reginald Jones-Sawyer, a member of the California Reparations Task Force, listens to public comment during a public meeting at the California Science Center in Los Angeles on Sept. 23, 2022.Pablo Unzueta / CalMatters

Jones-Sawyer said that the bill would not slow reparations.

Another controversial provision in the bill would allow legislators to remove and replace task force members. Many audience members argued against that.

Chris Lodgson, with the Coalition for a Just and Equitable California, which push to create the task force, told CalMatters the removal clause is dangerous.

“It politicizes this,” he said. “If some of the politicians don’t like the fact that we’re getting cash reparations, they could simply remove people on the task force who support them.”

“We’re not the Supreme Court,” he said. “We’re only commissioners, and we serve at the will of the deployment agent.”

Lodgson said he believes Jones-Sawyer wants the composition of the task force to change so eligibility for reparations could be voted on again. Jones-Sawyer was among four task force members who voted against limiting reparations to those who could trace their ancestry to enslaved relatives.

Jones-Sawyer responded that he cannot predict what will happen to task force members.

Other public commenters urged the task force to keep its word and limit reparations to those who descended from an enslaved or freed ancestor.

In other discussions, Amos Brown, a civil rights leader and task force member, asked that every member of the Legislature receive a copy of the task force’s first report, to ensure they can’t ignore it. And the task force heard from experts on international models of reparations from Chile, South Africa, and Germany, and discussed the United Nations’ standards for remedying human rights violations.

The task force plans to meet again in Oakland on Dec. 14 and 15.