After years of massive wildfires, it’s become evident that these blazes do more than burn their surroundings — they’re also influencing weather.

The relationship between weather patterns and wildfires has been studied for a long time. Researchers have seen how certain conditions are more conducive to the creation and growth of wildfires. Drought, which can dry out forests and create perfect fuel for a flame, is one example.

As teams of firefighters have deployed to combat blazes throughout the state, researchers have seen more and more examples of the unique ways that massive wildfires influence their environment.

“Fires create their own weather, they can get very intense, and they can really impact the weather around them,” says Craig Clements, who directs San Jose State University’s Wildfire Interdisciplinary Research Center. 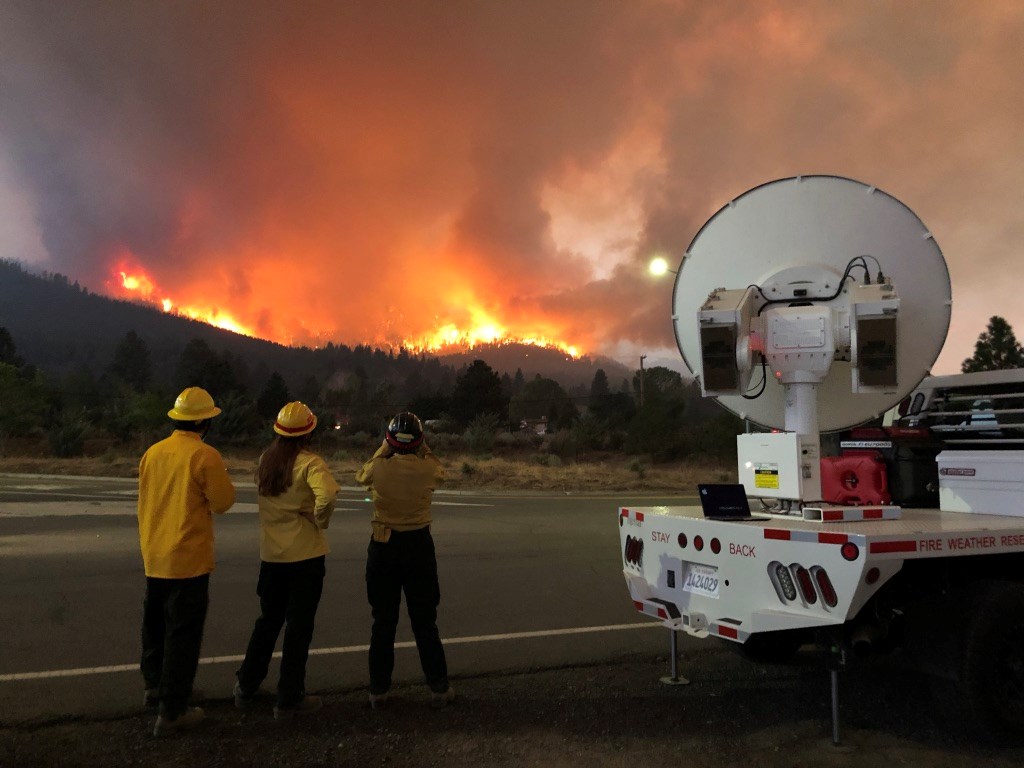 With a team, Clements studies these weather patterns and also observes them in person. His team’s field approach is still largely uncommon when it comes to how fire-induced weather is studied.

“There's not a lot of observational research because it's very hard to collect these types of data,” he says. “Most wildfire research is done after the fact, after the fire's already been put out and people go back and look at how intense it was.”

As large wildfires become more common, Clements says that work like his could help predict wildfires-induced weather patterns, and therefore help teams of firefighters prepare for it.

The idea of a fire influencing its environment isn’t new. Wildfires, regardless of size, inevitably have an effect on their surroundings.

“Even small fires, even grass fires, modify the local wind around the fire,” Clements says.

But what is new is our ability to predict fire-induced weather patterns quickly enough to help firefighters anticipate them.

Adam Kochanski is another researcher at the Wildfire Interdisciplinary Research Center, leading the center’s fire modeling group. The models he uses focus on how fires create their own weather as well as how they impact air quality.

A decade ago, Kochanski says, models like his weren’t fast enough to predict fire-induced weather in a useful timeframe. It could take days to work out a prediction, which would come far too late.

In the last few years, Kochanski says they’ve been able to refine their model, which can now create a 48-hour forecast within three to five hours.

“That’s a big change,” he says. “Now, because of that, we start thinking about those models, not just as research models, but also as tools that can provide useful information if you have a fire.”

But this kind of prediction isn’t enough on its own. It’s hard to tell, without observations to back it up, if the predictions he gets are accurate — and that’s where Kochanski says Clements in-person work comes in.

What researchers are seeing

With a team, Clements goes out to wildfires while they’re still happening to make observations. He says that the ways in which fires influence their environment vary.

Clements says that these changes to the weather start with the heat emanating from the fire itself. The extreme heat of the fire causes air to rise quickly, creating fire-induced winds. These winds sometimes help the fire spread more quickly and can arise even if the location of the fire wasn’t particularly windy before the blaze started.

If a blaze is large and creates particularly strong updrafts, that can then cause clouds to form. These clouds are sometimes called “fire clouds” or “pyrocumulous clouds.” Sometimes, a large fire can create a thunderstorm, called a “pyrocumulonimbus cloud.”

And then there are “fire tornadoes.” Clements says that these tornadoes can happen after a fire cloud has formed.

“If you form a cloud, you get some cooling, and then you can actually get downdraft air … back down to the surface from the cloud,” Clements says. “And that can actually push the fire in different directions.”

When the winds start coming at the fire from different directions, this can start rotating the plume of smoke and the fire itself, which can create a vortex such as a fire-generated tornado.

“It's these larger scale vortices that can be very dangerous,” Clements says. “And we've seen a lot of those in California over the last few years, like the Carr Fire, the Creek Fire, to name just a few.”

Large fires also create a lot of smoke. Kochanski says that a large quantity of it, like the smoke that inundated the Bay Area as a result of the fires in 2020, can turn the sky orange for days in a row and lower temperatures.

There are longer-term impacts, too. Kochanski says that a large wildfire can inject smoke high up into the atmosphere, which makes it harder for it to dissipate and can also cause it to travel long distances.

“If you inject it high enough, the smoke just stays there for a much longer period of time,” he says. 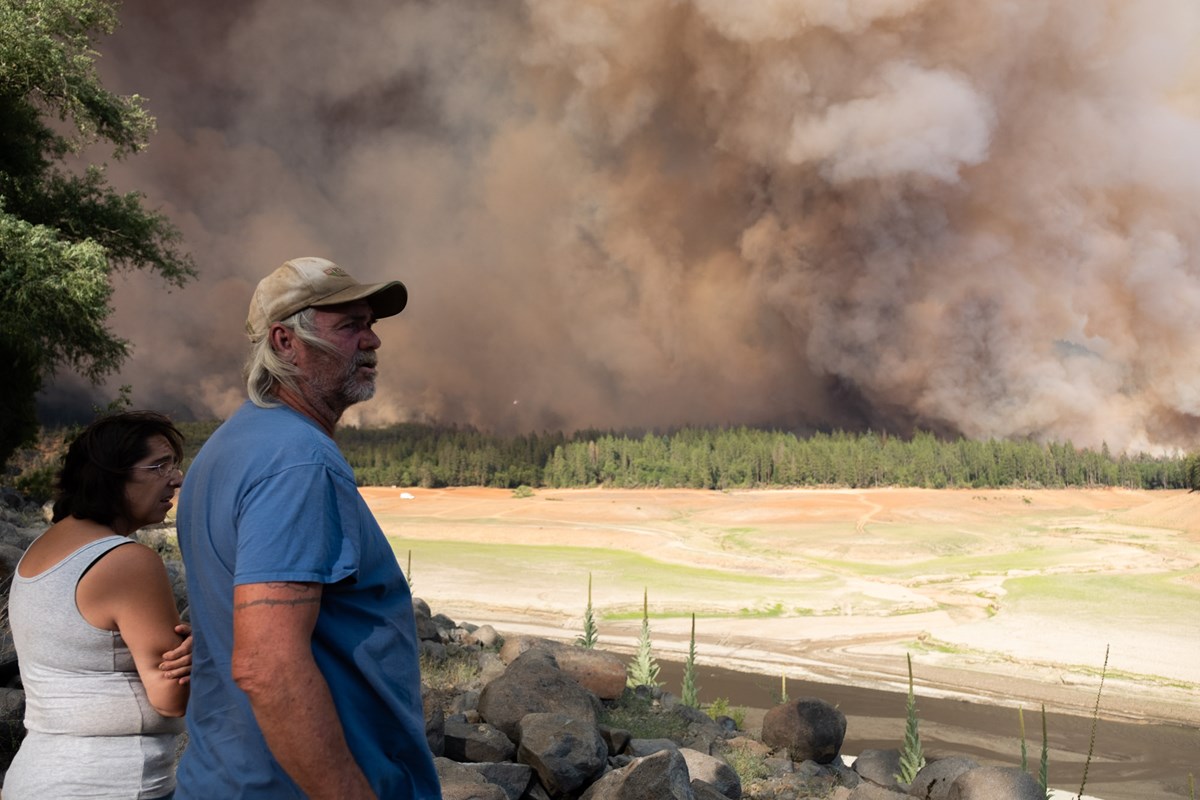 Kochanski says that climate change is becoming a bigger part of the conversation around fire-induced weather. As Californians have already seen, drier conditions make it easier for large wildfires to erupt, which then increases the likelihood of drastic fire-induced weather patterns.

As a result, he says that researchers need to adjust their expectations of what fires will look like in the future. Making predictions of CO2 impacts from large wildfires, for example, will need to account for how wildfires might continue to grow in size in years to come.

“We are kind of trying to wrap our heads around it and see how to put everything together to better understand what we should expect,” he says. “What is going to be the impact of those fires on the climate, on the timescales of, let's say, tens or hundreds of years?”

Clements says that there’s more work to be done in terms of observing these weather patterns.

“It's one of the phenomena that we just don't get enough observations of,” he says. “And so as the fires are getting worse through climate change, we need more people trained in the wildfire sciences as we move forward in the next few decades.”