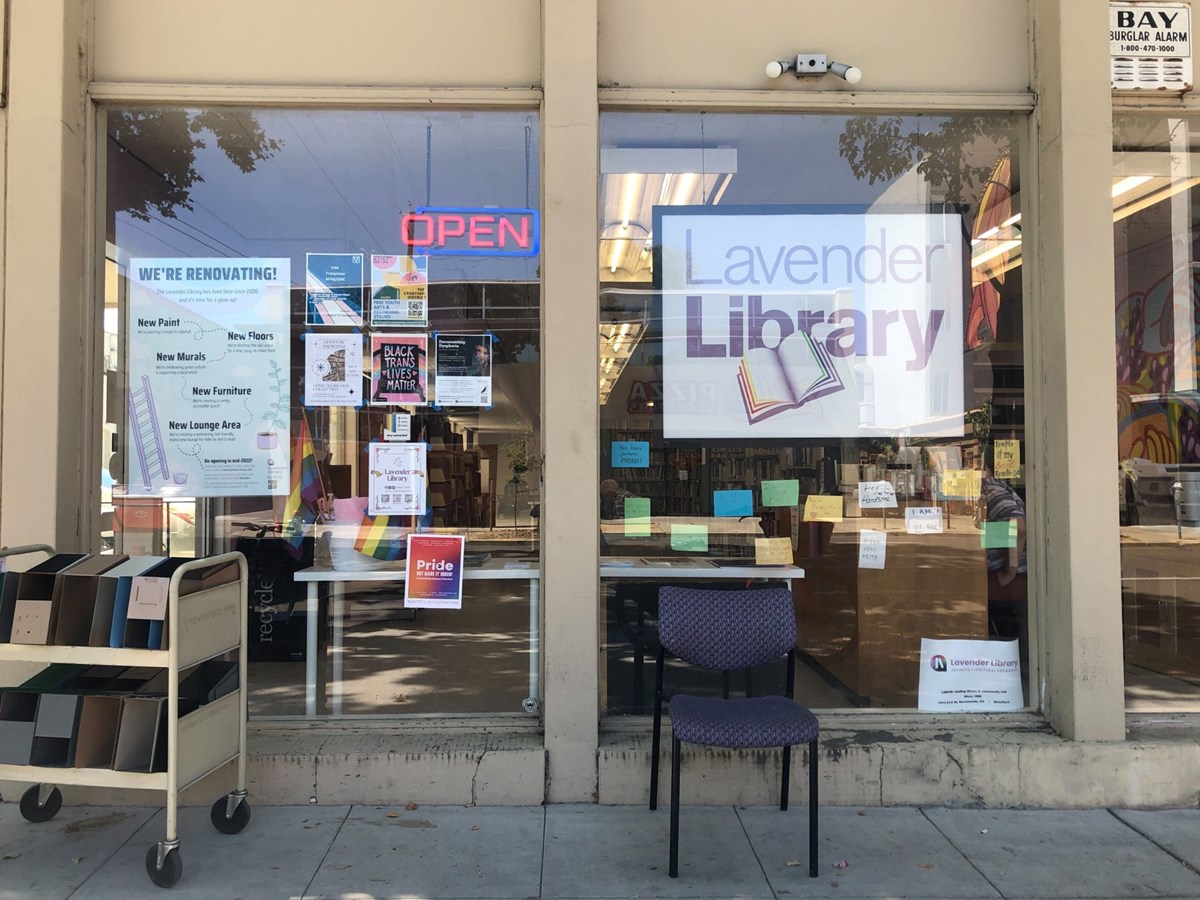 Facing the outside of the Lavender library are posters for local queer events and messages of encouragement.

Four years ago, while driving home from work, Michaela Payne caught a flash of rainbow — the progress pride flag — hanging on the glass window of a building along 21st Street in Sacramento. It was enough for her to slam the brakes and pull over.

She had a library to investigate — one that became a “contributing factor” behind a move to the city. Payne had found the Lavender Library, Archive and Cultural Exchange, a  23-year-old space that has been a sanctuary and encyclopedia for LGBTQ people coming out, a community hub for those seeking connection and an archive that serves as both record and celebration of Sacramento queer history.

Now Payne is a co-chair for the library’s fundraising committee.

“It’s unpaid work, but it’s a labor of love,” they said. “This was a space that I wanted to be in … I had looked through the collection and seen a lot of books that I wanted to read. Probably way more than anyone could read in 10 lifetimes.”

The pride flags that drew Payne in are tucked away while the library undergoes renovation, a task that began in 2020 when its in-person space as the COVID-19 pandemic hit Sacramento.

Even with signage reading “QUEER SOURCE FOR BOOKS DVD-VHS MAGS ARCHIVE” in bold Sharpie ink, the library itself can be easy to miss. It’s no Sacramento Public Library branch and isn’t much bigger than a studio apartment.

But to library co-founder Gail Lang — like Payne — working at the library was a huge labor of community love.

“I personally, have no experience in this type of project but I have great passion and love for maintaining and preserving our history,” Lang wrote in a 1998 email to friends in her reading group. “As well as providing a place to collect and share information and creative pursuits and bring others together with this in mind.”

While she died of stomach cancer just five years after seeing the library take root — an effort she was dedicated to until her last breath — volunteers today say the Lavender Library more than fulfills Lang’s vision. 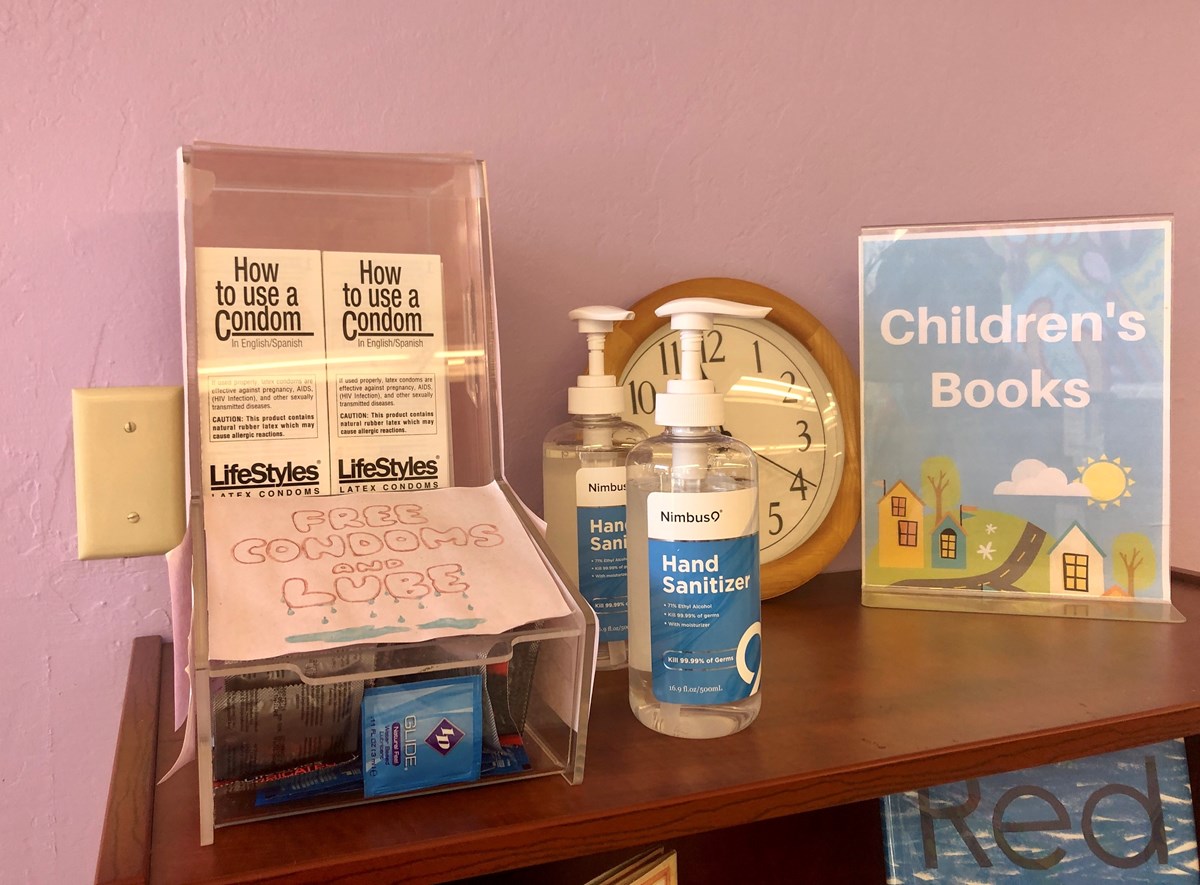 Payne describes the library as a compilation of elements you’d find “in a sex shop, research library and fun community space,” with “a fantastic collection of young adult and kids’ books” to boot.

The library opened for in-person browsing on weekends in April, and its volunteers are currently preparing to formally introduce the renovated space to the community later this year in a grand reopening celebration.

In light of that, they’re reflecting on the library’s history and their roles shaping it.

“Knowledge is power”: The Open Book to the Lavender Library

When it opened in 1995, the now-closed LGBTQ+ bookstore, The Open Book, became a stomping grounds for queer Sacramentans interested in meeting in a sober space. A constant fixture at its check-out counter was Gail Lang, the future Lavender Library co-founder and lifelong big hat, platform shoe aficionado.

That counter played host to countless conversations she had, including one that turned into a reading group called “Eclectic? Trash?” that’s still active.

Leonard Keyes, 75, inherited the group once Lang passed away. He remembers his first conversation with her: their small talk uncovered a shared New York and book-lover background and morphed into an invite to a reading group Lang was starting.

“Gail was very interested in both the exchange of ideas and opinions and those kinds of things,” he said. 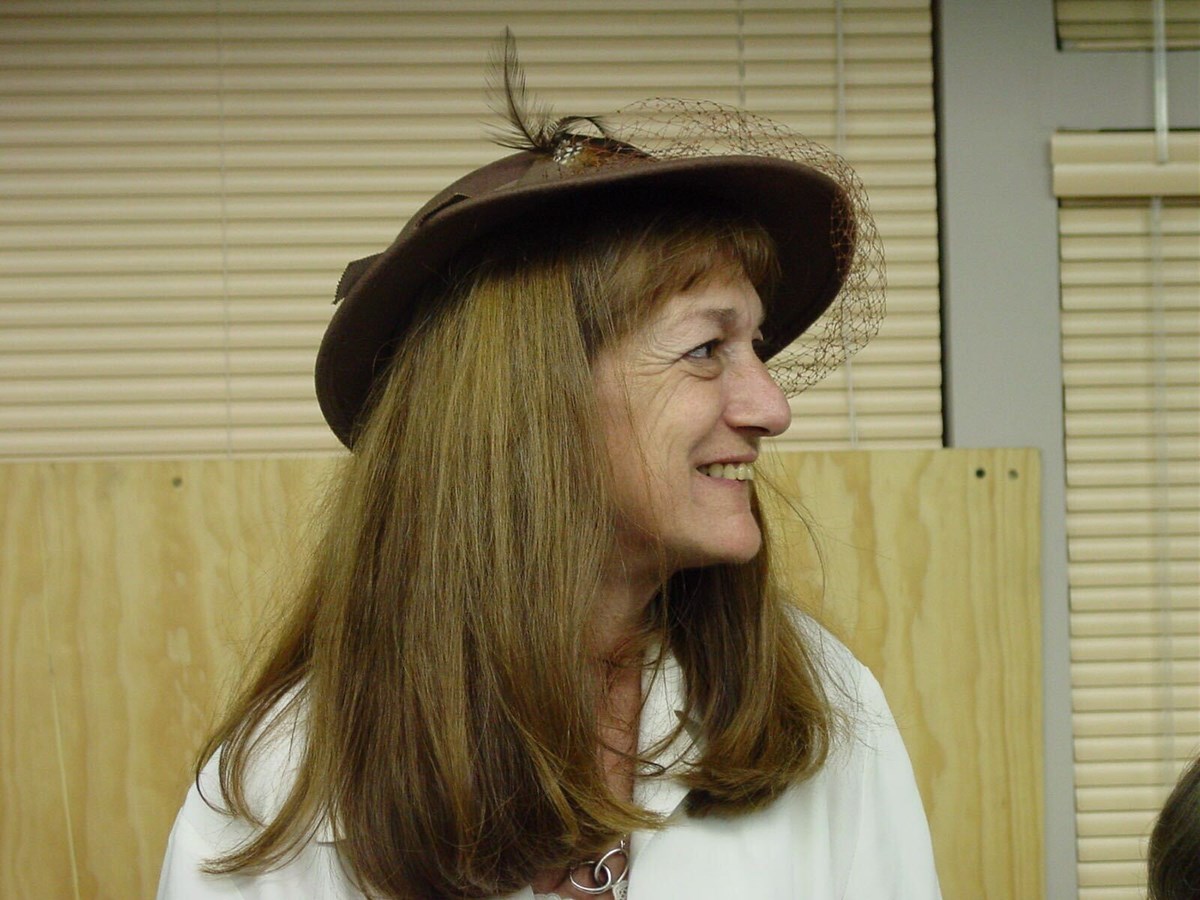 In her emails to the reading group, Lang, an effusive rambler, combined updates about new queer reading materials arriving at The Open Book and entreaties for the community to create and preserve knowledge.

“If we support creative and inspiring outlets for ourselves — they will exsist [sic]!!!” she wrote, tacking on praise for the “wonderful age of technology” and its ability to link people with information, regardless of geographic location.

“As it has been said so well: ‘KNOWLEDGE IS POWER.’”

But 1998 saw Sacramento queer knowledge on the verge of being tossed out. A variety of LGBTQ+ books, archives and ephemera were housed a few blocks away from the Lavender Library’s current location, at the Jayne Rountree Commemorative Library in the Lambda Center — now renamed the Sacramento LGBT Community Center — which grappled with financial challenges.

The uncertainty of the library’s future spurred Lang to action. She enlisted community members, including Rountree Commemorative volunteer librarian Michael Bennett, to build a library “exclusively focused on LGBT issues with an emphasis on Sacramento” that would provide a more stable home for the Rountree collection.

“I must ask, what happens to these volumes once each of us is gone?” Lang wrote in a Feb. 21, 1998 email to the reading group. “Silly to some, but as a person without biological children, and having seen what biological families find to value once a person is gone it becomes concerning to me as a passionate book lover and lesbian.”

In March of that year, the Lambda Center released the library’s contents to Bennett. Starting June 21, 1998, the earliest version of the Lavender Library, Archives and Cultural Exchange — the Sacramento Library Project — was born.

Its purpose, according to a library brochure dated June 10, 1999: “LLACE exists to reclaim the voice that has been silenced for centuries. And to use that voice as a tool for empowering others. We have existed since the beginning of time. No longer will we go unheard. Our history must be taught, cherished and preserved.”

Now, nearly 20 years after Lang’s death, the Lavender Library has gone through a metamorphosis.

Adapting the space for community needs

The titular lavender color now covers the beige paint Cindy Baudoin and her wife, Nancy, originally spread on the library walls in Oct. 2000. The decades-old brown carpet is now speckled vinyl. Fewer bookshelves crowd the room, and chairs with arms are nowhere to be found — changes made to increase maneuverability for disabled patrons and volunteers.

In the interest of accessibility for immunocompromised and higher-risk community members, the library continues to enforce a mask policy. 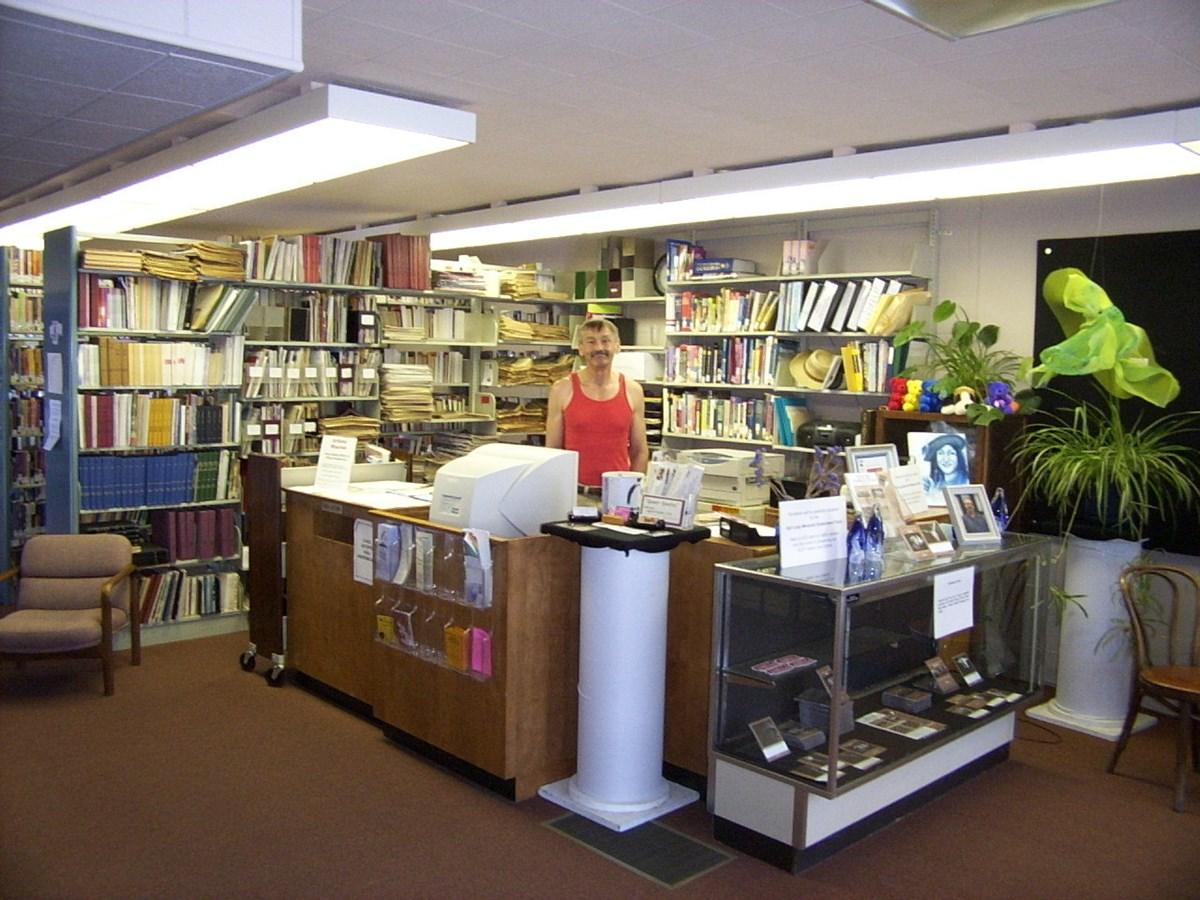 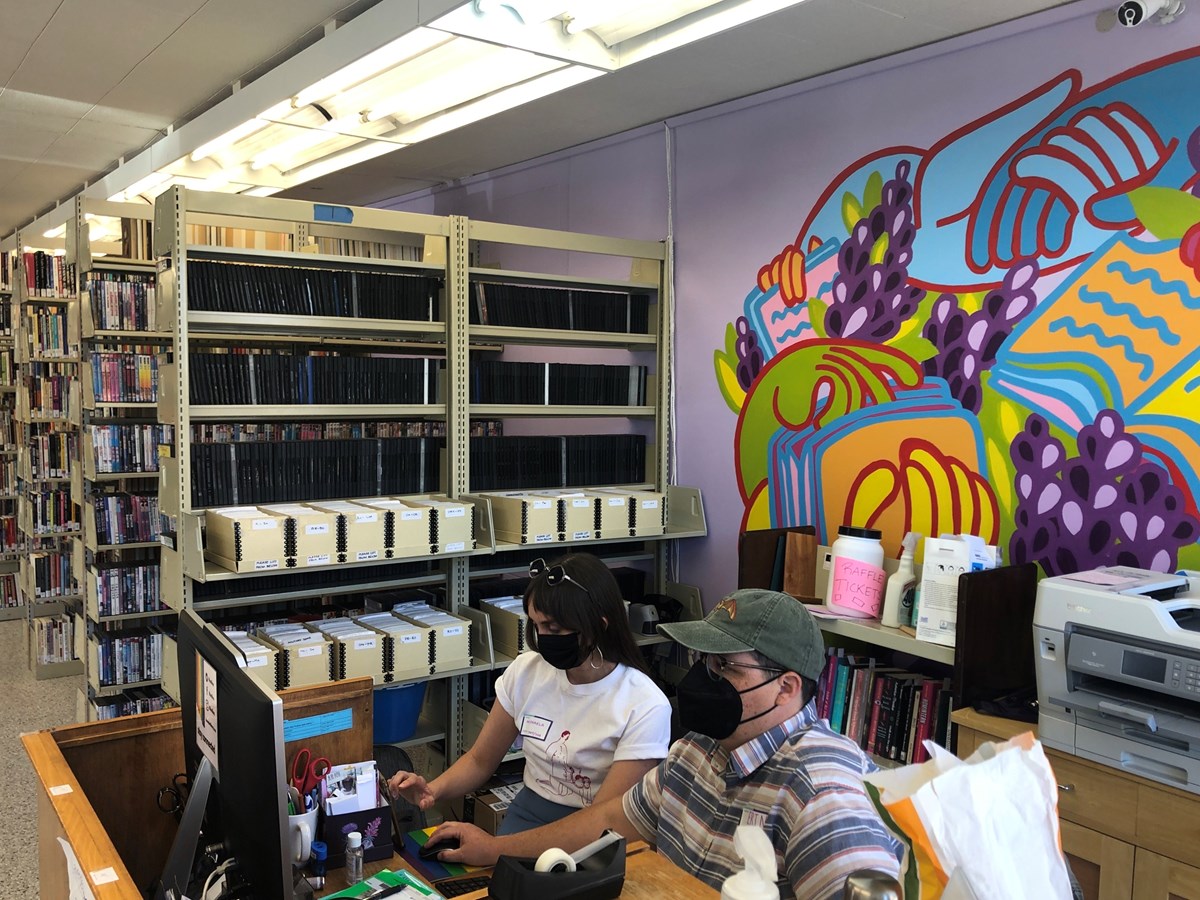 A side-by-side comparison of the library's front desk from 2005 and 2022. In the 2005 photo, taken by library volunteer Alan Waters, retired volunteer librarian Buzz Haughton stands behind the desk. In the 2022 photo, volunteers Michaela Payne and Erin Mahoney are discussing administrative work.

Alan Watters, a 65-year-old long-time volunteer, says the library’s patronage has diversified. Over the past 10 years, he’s seen more trans people, “others who may not identify as either male or female and might be nonbinary or other permutations of queerness” and families whose kids are exploring their gender.

To help a newer generation of library-goers, the collections committee has a strict policy for fiction: They’ll only take books that have been published in the last five years, with the exception of books featuring or by trans people or people of color published within the last 20 years.

“We want to make sure that our collection reflects the community that we’re serving,” explained Jo Kasler, the collections committee co-chair. “Just because of the way that publishing was, our collection, as it currently is, is so oversaturated with white cis people.” 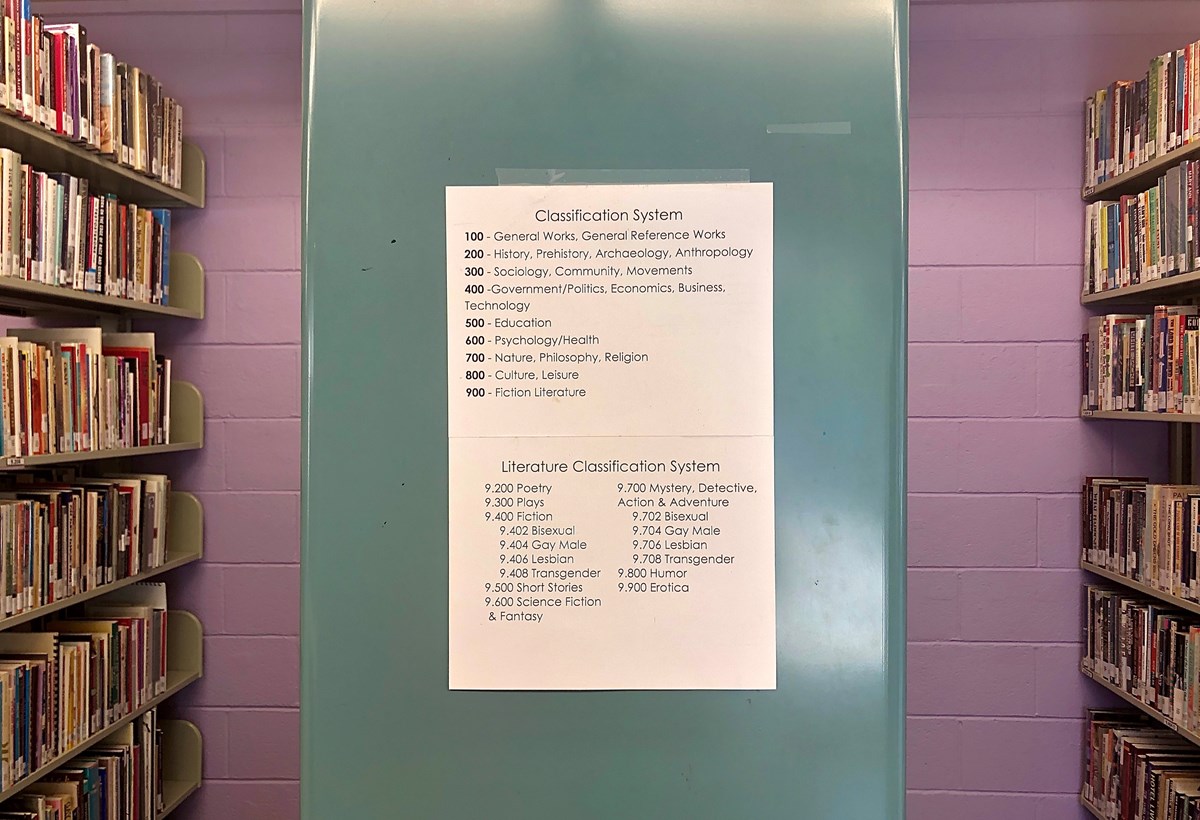 Though Kasler has bought books for the collection through grants and money earned from book sales, community donations comprise most of the Lavender Library’s collection.

“The only things we pay for are our expenses, our basic rent, our storage unit for our archives, our Bay Alarm and insurance,” said Baudoin.

The grant and donation-funded library’s current financial goal is to no longer require paid memberships, which range from $12.50 to $60, to check out materials.

Outside of a browsing space, the Lavender Library hosts community events, including comedy nights it moved to Southside Park during the pandemic, reading groups like “Eclectic? Trash?,” queer mixers, author meet-and-greets and “queer crafternoons”. Before the pandemic, its volunteers also facilitated walking tours of Sacramento’s Lavender Heights district.

Kasler said the library is also planning an oral history project to create a timeline through the eyes and words of long-time volunteers who were part of its genesis.

Despite codified protections against discrimination, anti-LGBTQ legislation is being introduced at an all-time high across the country, and the overturning of Roe v. Wade could lead to re-examination of precedents like the legalization of same-sex marriage, same-sex relationships and contraception access.

“Younger [LGBTQ] people, they want places where people can come in and feel safe and welcome — being safe, underline that three times nowadays,” Watters said.

In the face of having their rights undermined and threatened, acting board president Erin Mahoney finds comfort and safety in the library.

“It offers a place to explore radical ideas and to work together towards fighting fascist ideals,” they said. “I think now, more than ever, we need a place where we can go and talk about these things and at the very least, feel better on a personal level, but hopefully, find some path forward as a group.”

There is tragedy in our community, there is challenge, but there's also queer joy. And there’s beautiful connection.

For LGBTQ+ folks, finding a path forward amidst a landscape of homophobia and transphobia isn’t new, and that experience is reflected in the library’s name and collection.

While the library’s volunteers use “queer” as an umbrella term to indicate the library’s catalog spans the breadth of the LGBTQ+ umbrella — and the word has come to reflect the broader political action of living outside social norms — it also has a history of being used as a slur against the community.

And, while fictional, many older works of lesbian fiction reflect the very real material consequences of lesbophobia, hate crimes and suppressed self-expression.

As Payne says: “someone dies in all of them.”

But, she adds, the library is more than an inventory of oppression. It also stores films with gay storylines about exploration, books about the difficulties and joys about being in one’s first queer relationship and memorabilia from queer leaders in the Sacramento community.

“There is tragedy in our community, there is challenge, but there's also queer joy,” they said. “And there’s beautiful connection.”

Connection isn’t just the heartbeat of the library’s collection. Since it’s always been volunteer-run, relationships — from Lang’s friendships, to the library volunteers’ Slack and conversations had between the stacks — have been the library’s lifeblood.

Mahoney remembers one particular shift during the early pandemic that they only picked up “grumpily” because another volunteer called out. Towards the end of their shift, someone came in with a request.

Mahoney recounted: “He said, ‘I know you’re doing pick-up only, but I met my boyfriend at the library at one of those queer mixers a couple years ago and I really want to propose to him here — is it okay if I invited him down here? He’s just down the street.’”

So on a random Sunday afternoon, in the middle of the nonfiction aisles, Mahoney watched boyfriends become fiancees.

“In a moment of that exhaustion and tiredness of what we all were going through during the early pandemic,” they said, “that brightness and that sweetness just really helped bring me back to why this place is so important.”

The Lavender Library is currently open for in-person browsing on Saturdays and Sundays from 12 to 3 p.m. at 1414 21st Street.

Correction: This story has been updated to reflect that the collections policy Kasler mentioned specifically refers to fiction.