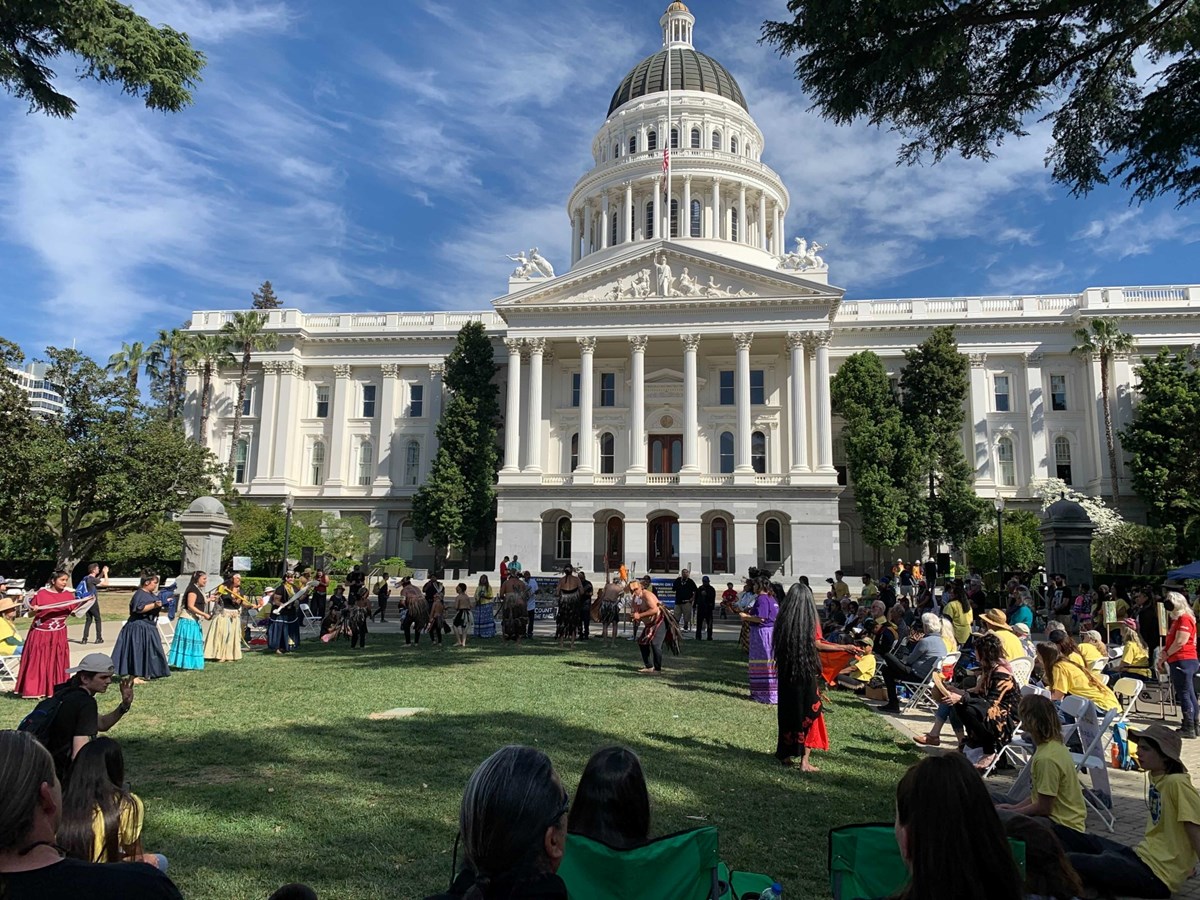 Activists rallied and Indigenous performers danced in support of a movement to halt the logging of redwoods in Jackson Demonstration State Forest at the state capital on Friday, March 25.

Late last month, hundreds of activists and environmental groups rallied at California’s state capitol. Indigenous performers danced while others chanted to protest the logging of redwoods in the Jackson Demonstration State Forest.

Their rallying cry? “Pomo land back.”

It was a familiar scene for Priscilla Hunter. As an elder member of the Coyote Valley Band of Pomo Indians, it wasn’t her first time rallying at the steps of the capitol building.

But this time, she said, it felt more personal than ever. Jackson Demonstration State Forest, located in Mendocino County, lies within the bounds of her ancestral lands.

At 48,652 acres, it’s the largest state-owned forest in California. It’s mainly comprised of coastal redwoods and for Pomo people, it makes up a significant part of their lands, which stretch all along the coast of Northern California.

For months, protesters have rallied and even camped out in this State Forest in order to prevent California’s fire agency, Cal Fire, from logging these redwoods. Kevin Conway, Cal Fire’s State Forests Program Manager, said that these protests significantly delayed the agency’s 2021 plans for managing the area.

Protesters say these trees are particularly important. Redwoods soak up large amounts of carbon, making them useful in combating climate change. And they also say that the trees need to be protected, as much of the irreplaceable old-growth redwoods in the state were logged throughout the twentieth century.

It’s a familiar story – environmentalists standing in the way of loggers, protecting trees from destruction. But, for Indigenous communities, the value of these redwoods extends beyond this.

“In their cutting down and making these timber harvest plans, they're destroying our sacred sites,” she said. “There's a lot of sacred sites on those mountains…and they're not protecting them.”

The history of protests in Northern California forests goes back decades. Activists spent months protesting the logging of old-growth redwoods throughout the 90s, part of a period now known as the Timber Wars.

Cal Fire’s Conway said that these protests changed his agency’s plans for Jackson Demonstration State Forest, which the agency has managed since acquiring it in 1947. After the protests, logging was paused between 2001 and 2008.

Logging was reinstated after 2008, but Conway says that Cal Fire restricted its use of clear-cutting and emphasized the growth of older redwoods. Now, the agency has protections in place for certain areas of old growth and plans to guide other areas to become old growth in the future.

“It really set forth for Cal Fire how important it was to grow these larger trees there on a sustainable basis, or for the purposes of increasing the amount of old growth ‘set asides’ that are out there,” he said.

But this time, Indigenous voices are at the front of the movement to protect redwoods. Michael Hunter, Priscilla’s son and chairman of the Coyote Valley Band of Pomo Indians, said that for Pomo people, their history is intertwined with the existence of this forest.

“Thousands of years they lived there, they died there – they became soil,” he said.

Conway said that government-to-government consultation between Cal Fire and the tribe began around April of last year. In these meetings, they looked at active timber harvesting plans that involved the tribe’s cultural sites and discussed what protections for those areas should look like.

Priscilla Hunter said that these sites often relate to areas where old Pomo villages once stood, and where cultural artifacts can be found. In these conversations, she expressed how she disagreed with the way Cal Fire was defining the boundaries of these sites. She said their  definitions are often too narrow. Her ancestral lands were wide expanses, not confined by strict lines.

Conway said that these conversations have already led to Cal Fire officials rethinking their approach to cultural sites in forests. He says that the usual methods of assessment can be “clinical” at times, which the tribe often challenged.

“They really introduced that human element to it,” he said. “With that, we've been able to have some conversations about additional measures that would be taken along the sites.”

Since demonstrations in Jackson Demonstration State Forest ramped up last year, supporters have rallied behind the phrase “Pomo Land Back” to highlight the need for tribal management of the area.

But the tribe’s efforts predate this conflict. In 1986, Priscilla Hunter founded the Intertribal Sinkyone Wilderness Council with other tribal leaders to protect their ancestral lands in Northern California from clearcut logging. The council has since acquired over 4,000 acres of land.

“I've seen that [working together] would be the only way to organize, to be able to get that land,” she said.

Tribal and state governments have come together to manage lands in other states before. But Conway said that this approach is still fairly new in California.

He’s seen partnerships between state parks and tribes for projects before.

“But formal co-management of an entire property, I’m not aware of,” he said.

Since February 1, logging in Jackson Demonstration State Forest has been on pause while Cal Fire officials conduct an annual survey of spotted owls nesting in the area. Protesters are seeking a moratorium on logging in the area in the meantime.

Usually, the survey is completed sometime in mid-to-late-April, which then allows logging to continue.

Conway said that there will likely be no logging in the “Caspar 500” – a section of the forest near the town of Caspar that was a hub for protesters – until after an advisory group meeting on May 2. He said that this meeting will be aimed at discussing community concerns and will likely result in some changes to how Cal Fire is managing this area.

While Cal Fire has logged this area for years, Conway thinks that the agency’s attempts to log areas like the “Caspar 500” on the western side of the forest, which lie close to towns like Mendocino and Caspar, caught community attention.

“We have not harvested very regularly on the western edge of our forest, knowing that we were going to run into some of these social conflicts that we have run into,” he said. “What surprised us was the extent and the deepness of them.”

Conway said that Cal Fire has worked on community outreach and sought resolutions with protesters. But the disagreement here lies at the core of their management approach.

“There is a fundamental policy disagreement from some members of the community, that public lands should [not] be managed with commercial logging,” he said.

Conway said that a central purpose for Cal Fire’s strategy is to test the tradeoffs between commodity production and resource protection.

“And so using commercial timber management, the same tools that private landowners have available to them, is an important part of that,” he said.

Michael Hunter met with California’s Secretary of Natural Resources Wade Crowfoot on Wednesday. They discussed the possibility of a moratorium on logging in Jackson Demonstration State Forest.

While no moratorium has been set, Hunter said that he sees this conversation as one step toward reevaluating the way the State Forest is managed.

“We're going to have the opportunity to really rewrite the forest management plan,” he said. “And if that happens, that's going to be a precedent for all the other state forests.”