As California expands Medi-Cal, hundreds of thousands of immigrants will still be left behind 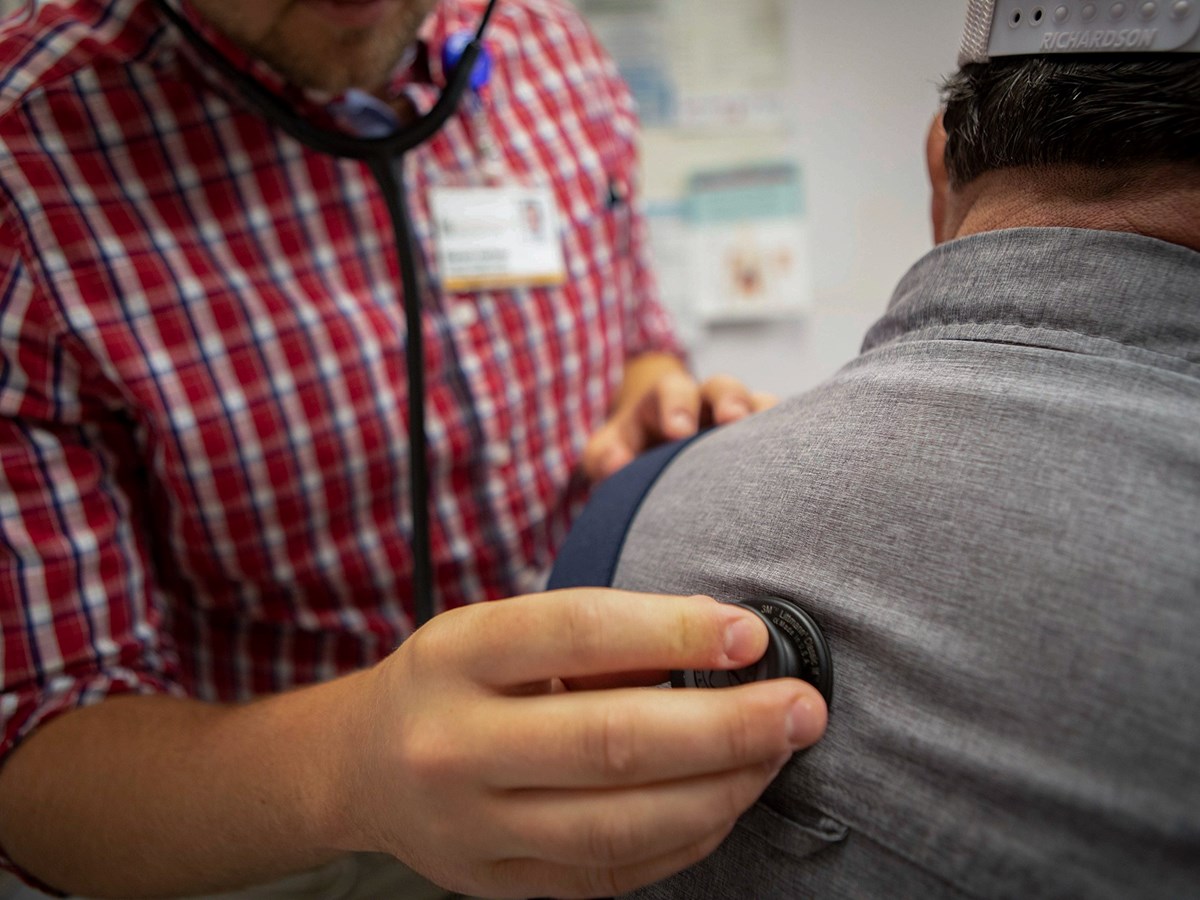 A physician's assistant listens to a patient's heartbeat at a clinic in Bieber.

Lucia Marroquin knows what it’s like to wait out pain in hopes that it will go away on its own. She is suffering from kidney stones and may need surgery. But because she lacks health coverage, her first question when she falls ill is always “how much will that cost me?”

So when California officials announced plans to extend Medi-Cal coverage to more undocumented adults, the Fresno County resident was hopeful that she would finally qualify for health insurance.

But her farmworker husband’s annual income of $35,000 puts the couple over the limit to qualify for Medi-Cal, which is reserved for low-income residents. So even under Gov. Gavin Newsom’s planned expansion, she’ll likely be left with no health insurance.

Experts say allowing people to sign up for comprehensive Medi-Cal coverage regardless of their immigration status is the single biggest step California can take to insure as many people as possible in the current system. Newsom called his latest planned expansion “universal access to coverage.”

But the expansion would still leave several hundred thousand undocumented immigrants like Marroquin uninsured. They are unable to qualify because they have jobs where they earn above Medi-Cal’s annual income thresholds for most adults: $17,609 for single people, $23,792 for a couple and $36,156 for a family of four.

That leaves many low-income immigrants with few viable options for health coverage. While most Californians who earn over the Medi-Cal limit can get subsidized coverage through Covered California, undocumented people are not allowed to buy insurance through the marketplace under the federal Affordable Care Act.

On May 1, about 235,000 undocumented people aged 50 and older will gain new access to Medi-Cal under a law signed last summer. A second proposal, unveiled in Newsom’s January budget, would include another 700,000 undocumented adults in the 26 to 49 age group, starting as early as 2024, if approved in this year’s final budget. Children and young adults are already eligible.

“This is a great achievement and it is absolutely amazing, but there will still be some who will remain uninsured,” said Arturo Vargas Bustamante, health policy professor at the UCLA Fielding School of Public Health. “It’s not universal health care, but the situation for many immigrants in California will be much better.”

In 2023, after Medi-Cal expands to cover undocumented immigrants 50 and older, about 3.2 million people will remain uninsured in California, according to researchers at the UC Berkeley Labor Center and the UCLA Center for Health Policy Research. Of those, 1.16 million will be unauthorized immigrants.

Even if Newsom’s next step is approved — covering undocumented adults 26 to 49 years old as early as 2024 — that would still leave roughly 450,000 undocumented people under 65 with no health coverage. (The difference between 1.16 million people and the 700,000 who would gain access.)

‘Doesn’t have to be free. Just a fair price’

The governor’s latest proposal would help Virginia Moscoso, a 29-year-old mother of two in Yolo County who is undocumented. She is enrolled in restricted-scope Medi-Cal, which is limited to emergencies and pregnancies, but hopes she would obtain full benefits if the proposal is approved in the final budget.

Moscoso is especially interested in dental care. A few months back, she had a toothache that she alleviated with home remedies, but she is overdue for a checkup. 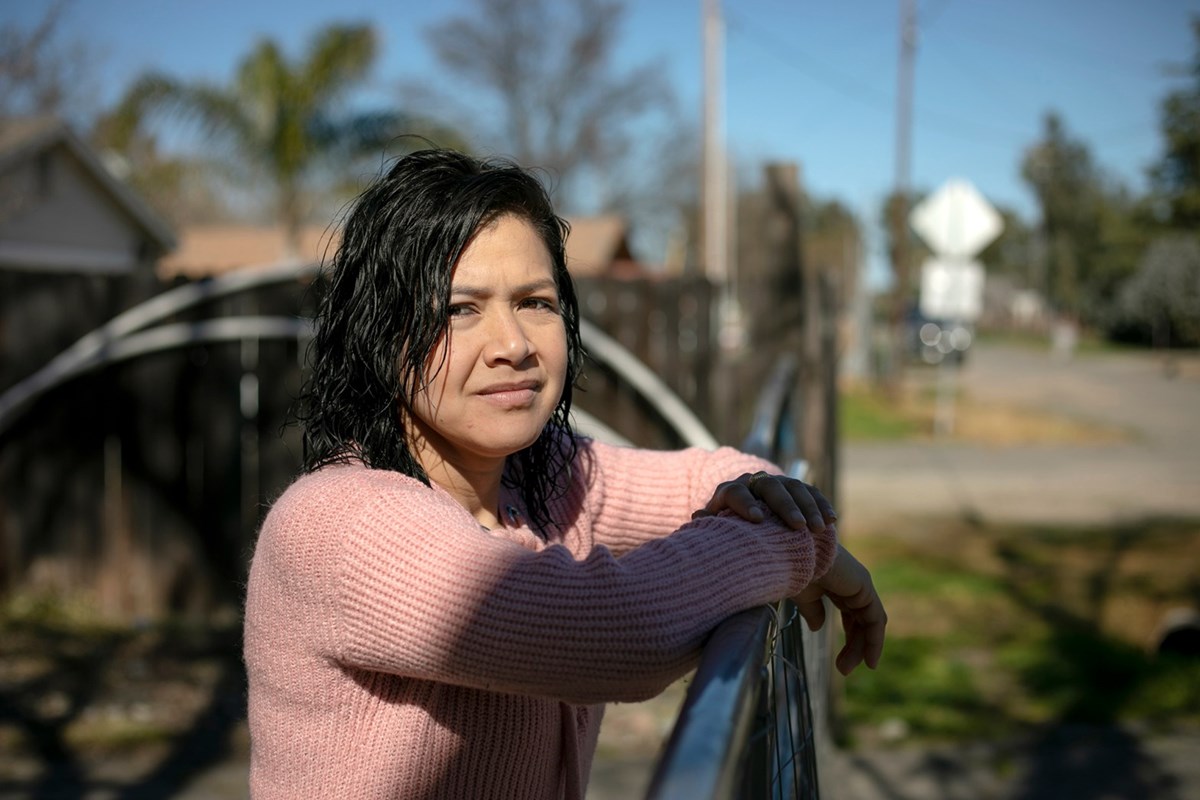 Virginia Moscoso, who lives in the Yolo County town of Dunnigan, will qualify for full-scope Medi-Cal if Gov. Gavin Newsom’s budget is approved, expanding it to undocumented immigrants ages 26 through 49.

In the past, Moscoso has worked seasonal jobs in farm fields, but her family of four mostly relies on her husband’s earnings of about $35,000, which means they would likely qualify — just barely — for Medi-Cal under Newsom’s expansion. Her children are already enrolled in Medi-Cal, and that’s a huge help, she said.

She’s grateful that apart from her pregnancies, she hasn’t needed to use her emergency Medi-Cal. But if she qualified for primary care, it would make a lot more sense than waiting until she’s ill in the hospital.

“For me it would be a great blessing,” Moscoso said. “Because when you go to the doctor it’s never just the one visit — you need tests and medication, and it adds up.”

Many people without health insurance seek care at community clinics where services may be offered on a sliding fee scale, so what they pay is based on their income.

That’s how Marroquin, 55, usually gets care. Each visit to the clinic costs her about $40. A recent ultrasound for her kidney stones cost her $200.

Marroquin has applied for emergency Medi-Cal in the past but was denied because her husband’s income of $35,000 was too high.

“It’s very difficult to be without coverage,” Marroquin said. “It doesn’t have to be free, just at a fair price. As my husband says, we can get car insurance, why can’t we buy health insurance?”

For most adult enrollees, the limit to qualify for Medi-Cal is 138% of the federal poverty level. Eligibility takes into account income and household size. (Certain groups like pregnant women qualify at slightly higher incomes.)

People like Marroquin with wages near that threshold are considered to be among the working poor: They are not earning a living wage in California. Most Californians in that situation can buy subsidized plans from Covered California. But undocumented immigrants cannot, and while they can purchase coverage directly from insurance companies, it is often unaffordable. For instance, premiums for a couple in their 50s could cost more than $1,000 a month, said Alex Hernandez, a health insurance agent in Merced.

“I think some people, especially if they have an illness, see the value of having insurance despite the cost. But it’s tough,” Hernandez said. Facing such high premiums, “most people are going to say forget it.”

In 2016, California applied for a waiver from the federal government to allow undocumented people to buy from Covered California. But the state withdrew the application at the request of the Legislature when former President Donald Trump took office.

Insurance Commissioner Ricardo Lara, who spearheaded legislation for the waiver application when he was a state senator, said the request was rescinded because of concern that the Trump administration would use immigrants’ information against them.

The waiver application has not been resubmitted by the state, but it’s still an option, Lara said.

Even if a waiver were approved, undocumented residents would still have to purchase insurance without federal subsidies. The state could, in theory, provide some financial assistance, health advocates say.

Lara said Newsom made Medi-Cal expansion for undocumented immigrants a priority in this year’s budget, which shows just how much attitudes around the issue have changed.

“Back in the day this was an issue that people thought would cost you the election or cost you grief. It’s a tremendous shfit in attitude toward the undocumented community,” Lara said.

But to truly get to universal coverage, California will need to continue innovative approaches and drill down on affordability, Lara said. He authored a single-payer bill in 2017 and thinks that type of system is inevitable, but will take time. In the meantime, he said the state should keep expanding coverage where it can.

Last month, the Legislature’s latest version of a bill that would have created a state-funded single payer system died on the Assembly floor. It didn’t have enough votes, according to its author, Assemblymember Ash Kalra of San Jose.

Lack of access because of immigration status is just one piece of the remaining uninsured. Many other Californians forgo coverage despite being eligible, likely because of the cost. According to the UC Berkeley and UCLA study, 2 million uninsured people qualify for Medi-Cal, employer coverage or Covered California.

“The most common reason that people eligible for employer coverage remain uninsured is that they can’t afford the premium contributions,” said Laurel Lucia, director of the Health Care Program at UC Berkeley’s Labor Center.

People eligible for Medi-Cal may go without it for a number of reasons. A report from the California Health Care Foundation found that people may be deterred from applying because of misinformation or a negative perception of the Medi-Cal program. Some who tried applying reported having a hard time navigating the enrollment process.

Similarly, people eligible for Covered California may go without it because they either don’t know they are eligible for financial aid or may still not be able to afford it even with the help.

Covered California officials last month announced that because of a temporary boost in federal subsidies, two-thirds of enrollees in its most recent sign-up period were eligible to get coverage for $10 or less a month. This year’s enrollment period closed with a record 1.8 million Californians signed up for health insurance through the marketplace.

To further aid with affordability, the chairs of the Legislature’s health committees recently introduced bills that aim to reduce deductibles and copays for people enrolled through Covered California.