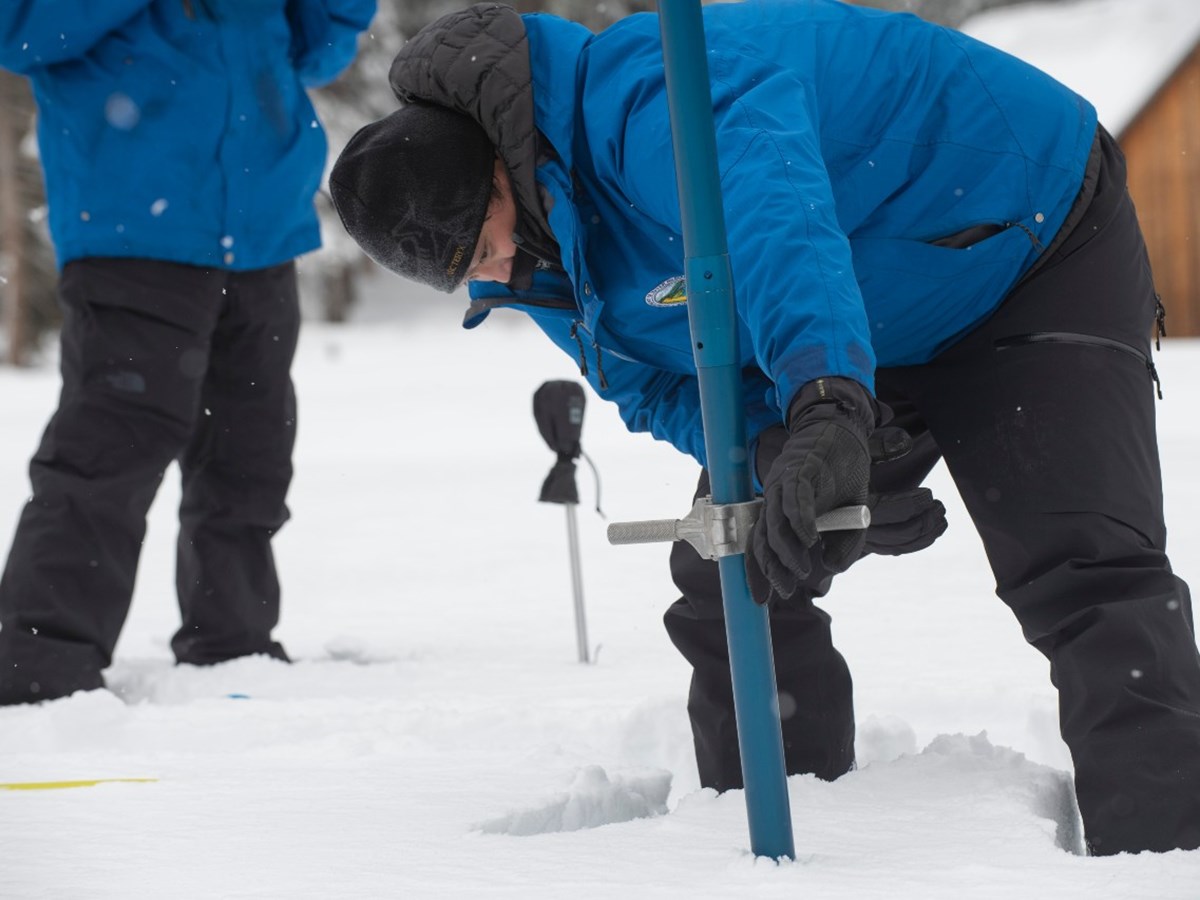 Sean de Guzman, chief of snow surveys for the California Department of Water Resources, measures the depth of the snowpack during the second snow survey of the season at Phillips Station near Echo Summit, Calif., Wednesday, Feb. 3, 2021.

Packed onto the slopes of the Sierra Nevada is a precious source of water for California — a frozen reservoir that climate change is already transforming.

As the planet warms, the spring snowpack is dwindling. The snow is creeping up mountainsides to higher elevations, melting earlier in the year and seeping into dry soils rather than washing into rivers and streams that feed reservoirs.

The risks are no longer futuristic or theoretical: The state’s projections for how much water to expect from the Sierra Nevada were so far from reality last spring that reforming the process has become increasingly urgent.

The calculation for the Sacramento River region was off by 68%, leaving the state’s reservoirs with far less water supply than expected.

“If you’ve changed the climate and then you try to use statistics — which relies on what happened in the past — to predict the future, you’re already running into an issue,” David Rizzardo, manager of the California Department of Water Resources’ hydrology section, told CalMatters.

State officials are altering their forecasts to take into account the myriad ways climate change is reshaping California, from warming temperatures to soil dryness. The stakes are huge: The Sierra Nevada snowpack provides about a third of California’s water supply.

“We’re way past the time when we could ignore climate change,” said Peter Gleick, a climate and water scientist who co-founded the Pacific Institute, a global water think-tank. “The water agencies really need to get on the ball here. Can you tell I’m a little frustrated?”

The process is complex, requiring a massive expansion of data collection from the state’s snowpack and watersheds, and an overhaul to the forecast calculations.

“We’ve been forecasting since 1930. This is a complete overhaul,” said Sean de Guzman, manager of the state’s Department of Water Resources’ snow surveys and water supply forecasting section.

Snowpack: How it’s measured and why it matters

When the weather warms and the rain stops, melting snow courses into waterways, then into reservoirs, faucets and sprinklers — supplying California’s homes, farms and wildlife right when they need it most.

To keep close tabs on this precious resource, engineers like de Guzman plunge tubes into the snow to gauge its depth and water content, blanket remote mountains with sensors and weather stations and scan the snow cover from planes flying over watersheds.

De Guzman’s team plugs the snow measurements, along with information about rain and streamflow, into their calculations to forecast how much snow is expected to melt and run off into rivers and reservoirs. The federal California Nevada River Forecast Center calculates its own forecasts in parallel, he said.

Reservoir managers use them to determine when to hold on to water and when to let it flow.

Operators of state and federal water supplies rely on them to determine how much water to send to the cities, growers and water suppliers dependent on water pumped south through the Delta to hundreds of miles of canals, tunnels and pipelines.

Weekly forecasts from February through mid-June help the powerful Westlands Water District, the largest agricultural water agency in the nation, game out the year ahead — planning how much supplemental water to buy and how much to charge growers.

“Those forecasts drive all the finances in our estimates, when we set rates at the beginning of the year,” said Jose Gutierrez, Westlands’ chief operating officer.

Flood control, power generation and maintaining water quality for people, ecosystems and threatened and endangered species all rely on the runoff forecasts. Even outdoor enthusiasts benefit from the snowmelt predictions. “We get a lot of calls saying, ‘Hey, you guys must know when the waterfalls in Yosemite are going to be going,’” Rizzardo said.

The problem? The forecasts haven’t yet factored in how climate change has altered snowmelt.

“Climate change,” Rizzardo said, “has thrown a monkey wrench at all this.”

As climate change drives temperatures ever hotter, the snowpack is retreating up mountain sides to higher altitudes and melting earlier in the season. And the wet season is contracting into a shorter, sharper period of storms.

The future, said state climatologist Michael Anderson, will continue to bring more rain and less snow and shift the surviving snowpack from the north’s lower peaks to the central and southern Sierra’s higher elevations. The shift will mean having to change water infrastructure to manage snowmelt storage and increased flood risks from rain mixing with snow.

“If you think of Lake Tahoe, we’ll get to a future where at lake level there won’t be any snow but in perhaps the mountains, there still will be snow,” Anderson said. “And then we watch it start to move upslope.”

Scientists predict that in the next 35 to 60 years, if carbon dioxide and other greenhouse gases continue unchecked, the West’s snowpack could shrink even more substantially and even disappear for a decade or more at a time.

California already has seen a preview of this future, said Andrew Jones, a research scientist at Lawrence Berkeley National Laboratory and professor at the University of California, Berkeley.

In April 2015, former Gov. Jerry Brown watched as state staff measured a snowpack that didn’t exist — right when it should have been at its peak. It was the height of the last drought, which stretched from 2012 through 2016, and Brown stood in a field patched with dry grass. Behind him rose the bare slopes of what should have been snow-capped peaks.

“To know that this change is happening, and yet we’re all just living our lives and turning on the tap and using water as we always have done…it gives me a sense of appreciation for the fragility of the system that we have,” Jones said.

Though drought grips California once again, the snowpack wasn’t as scarce last year as it was in 2015. It was calculated at about 59% of normal in April 2021. But it took only one month for that snowpack to dwindle to 22% of normal in May. And, worse still, the rapidly melting snow didn’t refill rivers and reservoirs as expected.

Instead, it soaked into thirsty soils or disappeared into the air. By May, the runoff forecast for the Sacramento Valley had dropped by about 700,000 acre feet — enough water to supply 2.1 million Southern California households. All told, the forecasts overestimated runoff by 68% for the Sacramento River region and by 45% or more for major watersheds farther south, according to a state report.

“That was basically something we had never seen before. We have these various relationships that tell us if we have this much snow, you can expect this much water,” de Guzman said. “And that basically fell apart in 2021.”

Gleick said the overestimate had massive ramifications for the environment and the year ahead. For instance, when there was less water than projected, operators of the state and federal water projects petitioned regulators to relax requirements aimed at preventing saltwater from tainting key Delta water supplies in order to preserve more water in storage.

The shortfall was no surprise to Gleick, whose own research in the 1980s warned that climate change would shrink the snowpack.

“I would have suggested fixing the algorithms by the year 1990. But that didn’t happen,” he said. “So the best time to do it is right now.”

Turning up the forecasts

“What last year did was say, ‘Okay, we just need to kick all this into high gear, and figure out a way to get it done.’”

Better data is already in the works. Ten years ago, the Department of Water Resources teamed up with NASA’s Jet Propulsion Laboratory to conduct detailed surveys of snow cover from airplanes equipped with a remote sensing device called lidar and other instruments.

So far, the surveys have been limited to five of the state’s watersheds. Though the partnership with NASA has ended, the list will almost double this year with the addition of the Feather, Yuba, Truckee and Carson rivers.

These measurements will be critical for feeding new, data-hungry models informed by climate factors and incorporating more information about the watersheds themselves, such as vegetation, temperature and soil moisture.

New technology, including sensors that quickly assess the snowpack’s temperature and how much water it contains, are now being test-driven by the University of California, Berkeley’s Central Sierra Snow Lab and state officials.

The question is whether the scientists will have to start from scratch and build a new model “or are there ways that we can tweak the existing models to really make them more accurate again?” said Andrew Schwartz, the snow lab’s lead scientist and station manager.

“The old models that have been developed for this runoff no longer really apply to today’s climate, because the climate has changed already,” he said.

As part of a pilot project this year, one possible new model will include data from the airborne snow surveys of the Feather River and San Joaquin watersheds, and spit out forecasts that the scientists will compare to their current approach.

This year, the team is working on what he calls a major tuneup, incorporating more recent rain, snow and runoff data that better captures the relationships under climate change.

“By changing a lot of the datasets that we’re feeding into the models, that will hopefully help give us a better picture of what we’re now seeing,” he said.

Despite the challenge of forecasting the future, some state officials don’t expect as significant a gap between expectation and reality this year. Although dry conditions persist now, storms late last year built up the snowpack and soaked the earth, priming conditions for more snowmelt to reach reservoirs.

Rizzardo, though, is less optimistic, particularly after the Berkeley snow lab reported a record-setting dry streak. “This is also part of the question mark, because we’re seeing things we’ve never seen before. And so we can’t say with certainty, ‘This is what it’s going to be.’”