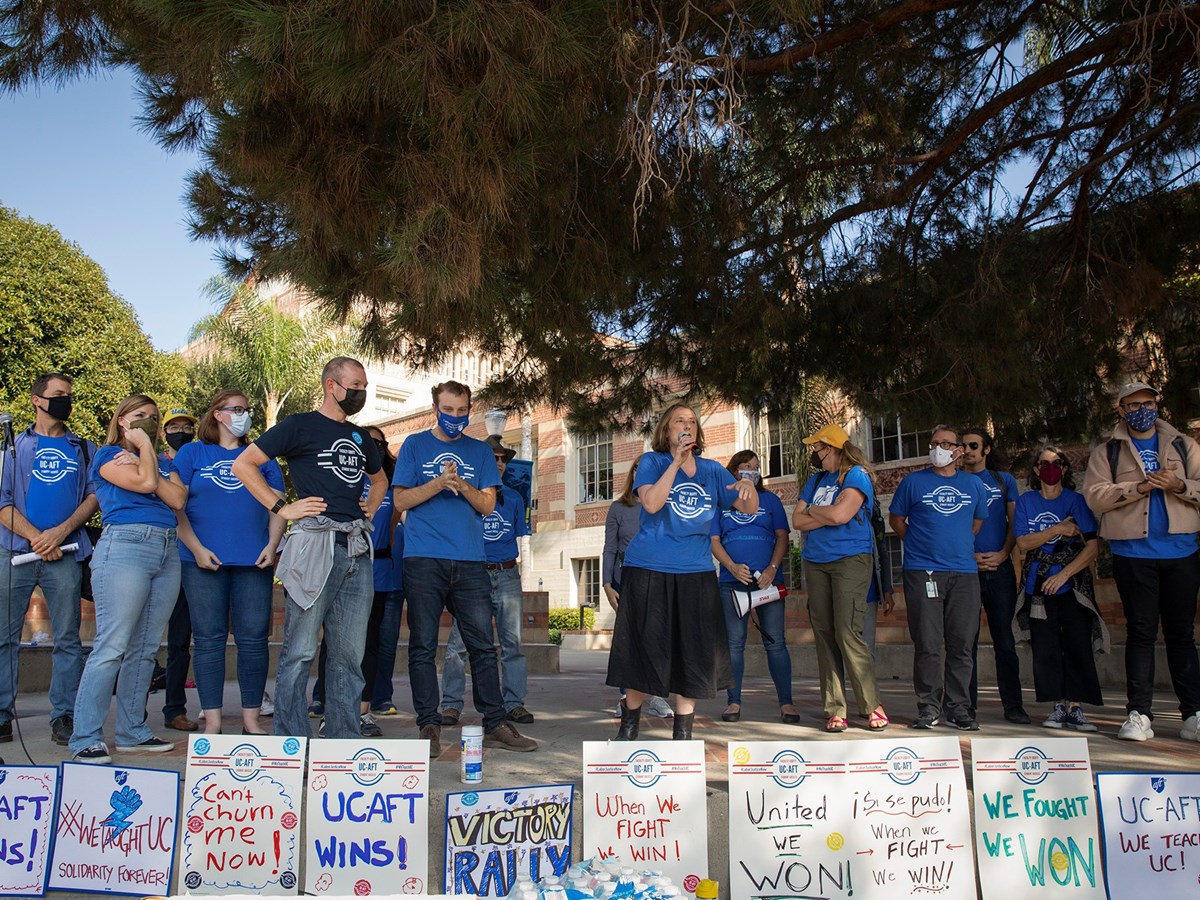 UC-AFT President Mia Mclver, (center) invites UC faculty members to walk on stage to celebrate the cancelation of the UC lecturers strike at UCLA on Nov. 17, 2021.

The University of California’s 6,500 lecturers called off their planned strike today after winning long-sought concessions from UC management — including salary increases of about 30% over five years for its members and job stability promises.

The deal, brokered around 4 a.m., followed two days of marathon bargaining sessions and capped off a labor impasse that began nearly three years ago.

“What changed is that we were really going to go on strike,” said Mia McIver, president of the union of lecturers, the University Council-American Federation of Teachers. “They understood how angry our members were.”

The work stoppage would have cancelled as much as a third of undergraduate instruction at the nation’s premier public university system.

Union officials called for the strike over the weekend to mount pressure on the UC’s negotiators. Numerous state lawmakers have been urging the UC to settle the labor dispute, blaming the university for the impasse. Aiding the union was a commitment from more than 800 senior faculty to cancel classes in solidarity with the striking lecturers.

UC President Michael Drake called the deal “a great agreement” at today’s UC Board of Regents meeting. The tentative contract “means more job security and other important benefits for our valued lecturers.”

The union and UC management signed a summary document outlining the new contract’s details this morning. The full terms will be spelled out later today. Union members will then vote on whether to approve the contract sometime in the next two weeks.

Lecturers are UC instructors who typically have doctorate degrees but lack the job stability and pay that tenure and tenured-track faculty receive. A CalMatters investigation found that a quarter of lecturers leave their jobs annually. Their short-term contracts can last  just a few months before they must re-apply, their pay averages around $32,000 because of limited work opportunities, and there is no system of performance reviews to determine when and how a lecturer can be rehired.

The deal addresses many of those concerns and includes:

Other details were nonbinding, such as language saying academic departments may assign lecturers additional part-time work if it becomes available.

“But the big fight was to create viable, teaching-focused career pathways for people who want them and I really think we’ve accomplished that,” McIver said.

As recently as 8:30 p.m. Tuesday the union was still prepared to strike after bargaining with the UC since 9 that morning.

The threat of the strike was technically over accusations of the UC’s unfair labor practices rather than the larger contract terms. That distinction is important: By law the union couldn’t strike over the contract because they were in state-led mediation with the UC. Adding to the confusion, the UC and lecturers have also been negotiating behind closed doors through a state mediator.

Ilse Aguilar, a senior at UCLA, said she would have supported the lecturers had they gone on strike instead. “I would not have been mad because I understand, being someone who’s worked full time before and has tried to unionize as well,” she said.

Dozens in attendance were students of UCLA’s labor studies program. Studies professor Kent Wong said his students were following the lecturer collective bargaining saga and were prepared to picket with the lecturers. “It is much better to have a victory celebration than a striker rally,” Wong said, who also directs the UCLA Labor Center.

The lecturer union and UC settled a key unfair labor practice gripe. Lecturers will now get four weeks of paid family leave at 100% of pay; previously the UC was offering paid leave at 70% and only for lecturers who worked more than 1,250 hours in a year, which excluded most of the workforce because so many work part time. The union was asking for eight weeks of paid leave.

The lecturer union victory has national implications, said Randi Weingarten, president of the American Federation of Teachers. She flew in to California to support the lecturer union at UCLA. The new contract is “a giant step to eliminate precarity and a giant step to create decency” for lecturers and adjuncts in other states, she said. The deal is a “transformation that frankly, no one else across the country has gotten,” she said.